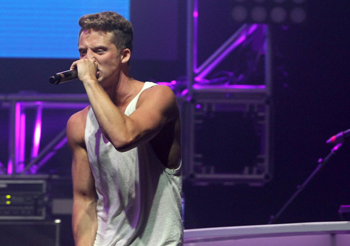 Admittedly, NF’s hip-hop is “dark and moody.” Don’t look for a Sunday schoolish happy-ever-after in his music, though he is a Christian.

Nathan Feuerstein’s rage emanates from the festering wounds of a broken home. His parents divorced when he was young, and his mom struggled with opioid addiction.

As a kid, NF didn’t understand why Mom missed events — even his graduation. One of her boyfriends physically abused him and delighted in striking terror in his two sisters. In high school, NF cut all communication with her because he felt strange and uncomfortable when the court ordered a social worker to monitor his conversations with her.

When he was 18, he received a heart-rending call. His grandmother said Mom had overdosed.

His soul-wrenching dirge “Why would you leave us?” was born of that personal apocalypse. It is a bone-chilling confessional that leaves no skeleton in the closet. Its unfiltered pathos is making people cry across the nation.

If Mandisa tells listeners “you’re an overcomer,” NF reassures them that they’re ok if they haven’t yet reached victory in Christ. He splatters ghouls into his lyrics, and the fiendish formula is resonating with millennials nationwide who want to know if there’s a viable alternative to suicide. 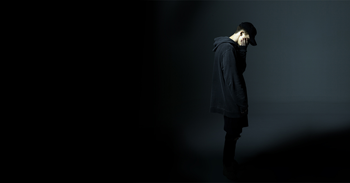 “I grew up feeling like pills were more important than I was,” NF says in a YouTube video. “I’m not past that. Some people pretend to be out of that place. Or they assume that’s what ‘Christian’ means. It means that we’re all great and everything’s perfect. That’s not what it is.”

NF was born in Gladwin, Michigan, in 1991. Rap was his escape, first listening to it, then writing it. His high school teachers mocked his musical inspirations.

His early flounderings seemed to confirm the admonitions to get a real job. He drove an old Volvo that overheated so much he changed his schedule to drive at night. Between concerts, he worked as an electrician to pay bills, according to David Daniels on Rapzilla.

But in October of 2017, NF silenced his detractors and left behind hardships when his third album, Perception, unexpectedly ranked #1 on Billboard 200. At the time, Forbes Magazine expressed shock that a virtual unknown had nudged Tom Petty’s greatest hits album off the top perch.

NF is a street poet who lashes out stinging rhymes with 220-volt intensity. He’s drawn comparisons to Dr. Dre and fellow Michigan native Eminem, but his lyrics are devoid of curse words, misogyny, crime and utter despair.

While he sounds the depths of pain, he points to God. 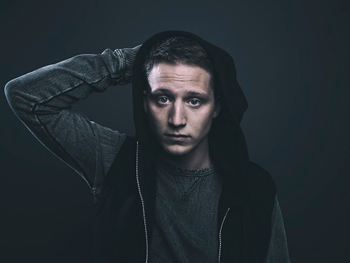 In 2014, he signed with Capitol Christian Music Group, the label that hosted heavyweights like TobyMac, Chris Tomlin, Amy Grant, Michael W. Smith and Hillsong. When Capitol finally decided to break into the hip hop market, they searched for a long time before they put their money on NF.

He hasn’t disappointed. According to West Michigan-based Local Spins, his music has been featured on Madden NFL 16, ESPN, VH1, Showtime and NBC’s “Chicago P.D.” His concert in London was sold out.

His most watched video “Real” with 18 million views on YouTube sums up his outlook on “real” music (his Twitter handle is @nfrealmusic):

I’ve been through hell all my life,
But I know where heaven is.
Father forgive me, for I am a sinner
But You gave me music as medicine.

Rapping was his safety valve to release the pain – and it still is.

Along the way, he’s discovered that legions of millennials also feel the angst of powerlessness. He has more than a million subscribers on his YouTube channel.

NF grew up going to church but the post-divorce war between his parents left him grasping for answers.

“I had a lot of problems growing up,” he told Sound Opinion. “My parents divorced when I was really young. My two sisters and I stayed with my mom for a little bit, but then my mom’s boyfriend was physically abusing me and one of my sisters. My dad took us from my mom and that whole situation got really messed up.

“Because of a lot of things that were going on, we kind of stopped having a relationship with my mom and didn’t really see her much. These experiences left me questioning a lot of things, and I went through my teenage years wondering if God was real. Obviously, that was a sketchy time in my life.” 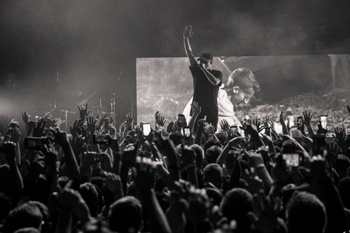 At some point the burdens overwhelmed him and he fled back to church.

“God kind of smacked me in the face one day and gave me a wake-up call,” NF says. “I started going back to church and this lady came up to me. I remember her saying, ‘I feel like I need to remind you that God is real and wants to have a relationship with you. You need to know that.’

“That was a total eye-opening experience. I really felt like God was smacking me in the face and telling me to look at the things around me, like the trees and people. With all the things in this world, how could there not be a Creator? That was definitely the turning point in my life when I knew that even though my walk with God hadn’t been on the right path, I believed there was a God. I also realized that I had no one to blame for my choices, except myself.”

Sharing his darkest moments has brought light to vast multitude of millennials journeying themselves in a Valley of the Shadow of Death.

“I’ve had kids come up to me at shows with tears streaming down their face as they tell me how much they can relate to the songs, which is really sad to hear about the issues they are dealing with as well,” NF says. “It’s powerful when someone says that God was moving them because of these songs and hearing my story.”