Two words turned track star Quanesha Burks around after an injury dimmed her chances to make it to the Tokyo Olympics: BUT GOD.

“A few months ago, I was dealing with severe bone bruising in my femur and two strained tendons in my patella and popliteus,” Quanesha wrote on Instagram June 30th. I couldn’t physically bend my leg yet alone walk or run properly.

“BUT GOD,” she declared in faith.

Then the Olympic star explained how her attitude, prayer and positivity allowed her not only compete but make it on America’s Olympic team. 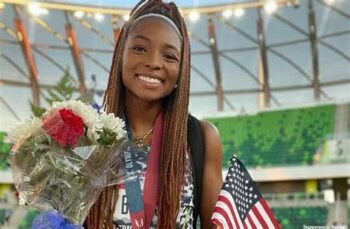 “I couldn’t control the injuries or what my future held. But I decided to embrace every day with prayer, positivity, and continuing to be a blessing to others,” Quanesha says. “I refused to let the setback determine my outcome and I knew God didn’t bring me this far to leave me.”

Born in Ozark, Alabama, Quanesha Burks had a small-town girl mentality. She even worked at McDonald’s after track practice to pay her grandmother’s car insurance. (But judging from the shape she’s in, perhaps she didn’t over-indulge on fries and shakes.)

“When I worked at McDonald’s, I thought it was the best job ever,” Burks told Sports Illustrated. “I was making $100 every two weeks. It’s terrible, but I came to work every day happy and I knew it was all part of my goal to go to college.”

Quanesha is a hard-working Christian girl who put her life into God’s hands.

At Hartselle High School, she placed third in the triple jump at the 2012 USATF Junior Olympics and won a 100-meter dash/long jump/triple jump triple at the 2013 state championships.

All the while, she drove grandma to work every morning at 4:30 a.m. and her sisters to school and after track practice, she logged hours flipping burgers and ringing up orders at McDonald’s from 4:00 p.m. to 10:00 p.m.

Since she excelled in sports, she hoped she might get a scholarship to college. She would be the first in her family to attend higher education. She researched and found she needed to jump 20 feet on the long jump.

“I remember looking up the requirements to earn a full scholarship and I wrote those goals down,” Burks said. “I jumped 20 feet and that’s when everything changed.”

She was well-positioned to try out for the Tokyo Olympics. The disaster struck in February. She injured her femur.

“Over 11 weeks of frustration, uncertainty, limitations from physicians, doubt from others and not being able to train was a big challenge for me,” Quanesha remembers. “I watched others compete, set new personal bests, and get closer to their dreams while I was injured at home.

Quanesha made a decision to not be held down by negativity. 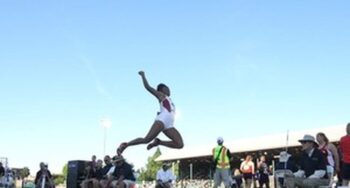 “I wanted to remove all of the negative energy from my life. I trusted God with the rest!” she says. “I decided to speak positivity into my future knowing that God would take care of the rest and he did just that! Do not let anything else get in the way of what God has promised for you!”

On June 30th Quanesha, against the odds, qualified for the Olympics.

“Becoming an Olympian is a promise God made to me before the trials or injuries. I held on to that promise through the good and bad!” Quanesha says. “Being an Olympian is great, but it could never be as fulfilling as the joy of knowing how my faith was tested beyond measure and I held on to God’s promise with all the trust I had, and He never left my side.”