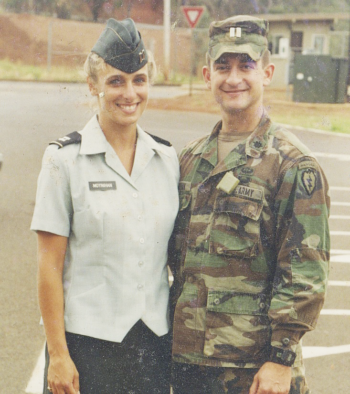 Growing up in East Hartford, Connecticut, Tim Moynihan loved war, espionage and sci-fi. He chaffed at school with a longing for adventure, so at 18 he enlisted and started boot camp following his graduation.

He first jumped out of an airplane with the Army Airborne during the summer between his junior and senior college years as an ROTC cadet at Providence College in Rhode Island.

“I wanted to be the guy, Captain Willard, portrayed by Martin Sheen” in Apocalypse Now, said Moynihan, now 52.

Through the Army, he became a commissioned intelligence officer and entered Ranger school in 1990.

“It was brutal,” he said bluntly.

One day, he was climbing up a cliff when he fell. He had read Hal Lindsey’s Countdown to Armageddon. Biblical prophecy fit in with his other interests in UFOs, Nostradamus and metaphysics.

He was no Christian, even though he had grown up in a staunchly Catholic family. Mostly he pursued punk rock, beer and girls.

But as he was falling through the air, a prayer flashed through his head, a prayer to an unfamiliar God. Suddenly and inexplicably to him, the rope tightened and broke his fall, a mere matter of feet from a bloody crash on the ground.

“That was a close call,” he said. “Somehow I knew God had saved me. Then out of the blue, a man at my unit invited me to his evangelical Bible study.”

At first, Moynihan declined, but the guy persisted and he eventually relented.

The Word confronted areas of sin he wasn’t ready to surrender.

His buddy challenged him to attend the Bible study again, but, honestly, the tough Ranger was…. afraid… to go.

“I felt fear about going back,” he admitted. “Yet I had just graduated from one of the toughest, most dangerous military schools in existence, so I forced myself to go again. Then again.

“Suddenly it all made sense,” he added. “One day I was reading in my room and it dawned on me that I was going to hell. That I had been just plain wrong for 26 years. I got off my bed and knelt on the floor and asked God to forgive me for being an idiot for 26 years.”

He became a new creation in Christ on that day in 1991. He married his live-in girlfriend, Sue, within the week – even though she wasn’t convinced of the truths of Christianity until about a year later.

They are still married today. His son TJ is currently an Army officer, and Andrew, a college ROTC cadet.

Moynihan started attending church and quickly received the call to preach. His deployments didn’t bring him under fire. During Desert Storm, he briefed troops on Middle Easter history, culture, military capabilities and tactics.

“I was a glorified paper-pusher and briefer with some very cool badges,” he said.

Deployed to Hawaii , he got involved in the Potter’s House Church and became an ordained pastor. He planted a start-up church in Honolulu from 1997 to 2006.

Then he was challenged to take over a troubled church in Oceanside, California, where you can find him on the streets preaching a confrontational salvation message to the Marines who don’t want to hear about their sinfulness.

“I have been hit, punched, head-butted, beat with a stick, spit on, had stuff thrown at me, stuff dumped on me and had a knife pulled on me,” he said. “Why does this happen? Because Satan hates the gospel. Satan hates leaders. But they treated my Savior worse when He carried His cross through Jerusalem.”

Moynihan has never met the Ranger made famous in the gripping Black Hawk Down movie who shares the same name. He frequently gets mistaken for the noted Ranger.

But more important than any case of mistaken identity is his identity in Christ, as a new creature, transformed by the power of the Word and His Spirit.

“I found my life as a pioneer pastor and an overseas evangelist to be the most exciting thing I have ever done,” he said.

More than 8K Christians remain in Afghanistan, many in hiding