What impacted Jeff Struecker most was NOT the thousands of hostile Somalis swarming his Humvee, nor the hailstorm of bullets and RPGs as he attempted to rescue fellow Rangers in the ill-fated 1993 raid of Mogadishu made famous by the movie Black Hawk Down.

What impacted him most was the next October morning back at base when his buddies one by one asked him about death and the afterlife.

“It changed my life forever,” Struecker said at Liberty University in a video posted on YouTube. “I would still be a sergeant in the ranger regiment today if it wasn’t for what I saw the morning after the firefight. It wasn’t really the blood and the bullet holes that had an impact on me. It was back at the base the grown men, some of the toughest warriors on the planet, with tears in their eyes. They said, ‘Jeff, what happened to my best friend who just died last night? Jeff, what happens to me if I get on a helicopter or a Humvee tomorrow and I don’t make it home?’ 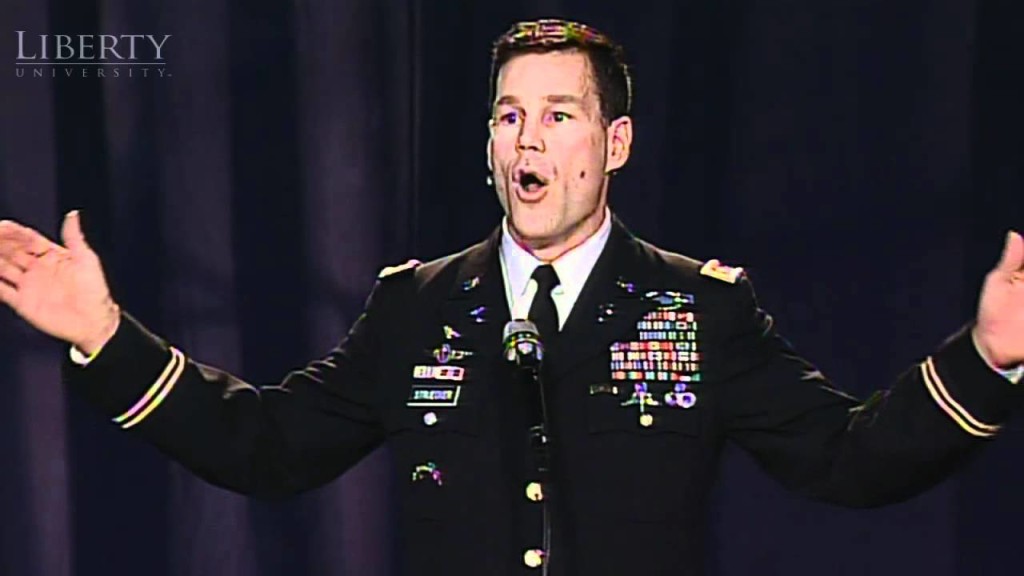 “Almost all of them were saying, ‘Jeff, there was something different about you last night, and I want to know what it was,’” he said. “For the next 24 hours, I had guys lined up to ask me about Jesus Christ because they could see the difference that He makes when you’re getting shot at and when the bullets flying.”

The advice he gave that night did more to direct Struecker’s career than the intensive Ranger training. Seeing a chance to impact the lives of men, Struecker became a chaplain for his same Ranger buddies in the 82 Airborne Division, a post he’s held for more than a decade.

While other Rangers secured the perimeter and Delta Force operators seized two of Mohammed Farrah Aidid’s top lieutenants, the subsequent efforts to rescue the fallen ranger led to two helicopters being shot down and 18 deaths.

The U.S. in 1992 was trying to provide free food during acute famine in Somalia at a time when the country was ruled by seven warlords. One of the warlords, Aidid, opposed the international aid and even killed 24 Pakistanis while they distributed food.

In 1993, the U.S. acted on a U.N. resolution and sent a military task force to either capture or kill Aidid and his top advisers. After seven missions, they had seized almost all of Aidid’s leaders. On Oct. 3, they received a tip that two outstanding top leaders were meeting in a building in Aidid’s stronghold; they decided to move in on that fateful Sunday afternoon.

Struecker led a column of Humvees to positions at each of the four corners of the building. Struecker rescued Blackburn, who was unconscious and bleeding through his nose and mouth, and stretchered him to a Humvee that would drive him to the base.

Steering through a narrow alleyway full of potholes, Struecker drove 15-20 miles an hour so he would not jar the injured soldier.

Turning a corner, “the entire city erupted with gunfire,” Struecker said. “We were being shot at from a 100 different directions, it seemed like – from rooftops, from alleyways and from doorways and windows. There were rocket propelled grenades and automatic gunfire from AK-47s from 20, 30 feet away.”

Rear gunner Sgt. Dominick Pilla was killed by a militiaman waiting in ambush.

“When I turned and looked over my shoulder, it looked like the whole back of my vehicle had been painted red with Dominick Pilla’s blood,” Struecker said. “I thought I was going to die in the next moments, but then I remembered I was in charge and I needed to get myself under control if I was going to get my men out of there.”

The column of Humvees managed to escape the hostilities in the city and return to the base. Medics and surgeons ran to stretcher in Blackburn. Meanwhile Struecker thanked God that he had gotten out alive.

At that moment, the platoon leader informed Stuecker that a Black Hawk helicopter had been shot down, and that the pilot needed Humvees to go rescue him. A special operator counseled him to wash the blood off the Humvee first so as to not terrify the new crew.

“I took buckets and sponges and brushes, and I began to clean Dominick Pilla’s blood off of the back of this Humvee,” Steucker said.

As he washed the Humvee, he experienced convulsions of fear like he had never felt before. “I was totally completely certain that I was going to die,” he said. “And every fiber of my being was saying, ‘No, Jeff, don’t do this. This is crazy. It’s suicide. You’re going to get yourself killed if you go back out there.’

“I was thinking that as a leader, not only would I get myself killed but I would get every one of my men killed if I went back out there,” he said. “There will be 10 more body bags tomorrow morning if I go back out there.”

But then he remembered he was a Ranger, whose creed is to never leave a fallen comrade to fall into the hands of the enemy. As a Christian, he started to pray.

“God I’m in big trouble right now, and I need your help because I’m certain that I’m going to die tonight,” he said.

The Lord brought to his mind the recent Bible devotional about Jesus in the Garden of Gethsemane. There, Jesus said, “Not my will but yours be done.”

“Jesus, the perfect sinless Son of God, walked into the hands of the enemy and He willingly, freely gave His life up so that your sin and my sin could be dealt with once and for all,” Struecker said. “At the back of that Humvee, I prayed, not my will. From that moment on, God once and for all dealt with that fear. I had no worries about what was going to happen to me that night.”

He was given no surety that he would survive, but he felt strangely assured that if he died, before his body fell to the ground, his soul would be transported to Heaven.

“I realized if I go home to my family in Georgia or go home to my Father in Heaven, in either case I cannot lose because of what my Savior Jesus Christ had done for me,” Struecker said. “That alone gave me the peace to go back and forth into the streets repeatedly for the rest of the night.”

Meanwhile, dozens of Rangers and Delta Force operators were fighting for their lives, completely surrounded by militiamen. Superior marksmanship and helicopter strafing runs held off the masses attempting to overrun the U.S. soldiers.

Struecker drove back into the maelstrom, dodging burning tires and evading ambushes at every turn. Once an RPG bounced off the hood of his Humvee and exploded against the wall, Gunmen opened fire on him with AK-47s from point blank range, but miraculously no one on his vehicle was injured.

He found half of the assault force in the city, loaded up the soldiers and headed back to the base.

To rescue the second batch of soldiers, Pakistanis and Malaysians joined the effort.  At 11:30 p.m. the convoy left to rescue the rest of the assault force.

In all, U.S. forces suffered 18 deaths and 73 injured. The U.S. left the region shortly afterward  and Aidid was subsequently killed in battles for control of Somalia.

As fallout hit Washington, Les Aspin, U.S. defense secretary, resigned because he had refused requests for tanks and armored vehicles in support of the mission. President Bill Clinton was criticized extensively for abandoning the region before goals were achieved and for failing to recognize the link between Aidid’s forces and Al-qaeda.

After counseling a large number of comrades shaken by death, Struecker realized God had something greater for him than “kicking in doors and slinging lead at the enemies of our country,” he said.

He became a chaplain for his same Ranger regiment.

“Before that night, I thought you could transform the world through military prowess and national power,” Struecker said. “But I realized something in Mogadishu, Somalia: There is only one force great enough to transform the world, and it is the Holy Spirit of the Living God through his Son Jesus Christ.”