After he rounded the last bend on the river in a dugout canoe, Don Richardson saw 400 Sawi cannibals in remote New Guinea waiting, masked, and in full warpaint — with weapons in hand.

Honestly, he didn’t know if they had a welcoming feast for him or if he, his young wife and baby were the feast.

“Do we look good enough to eat?” he thought. “There was nothing to do but get out of the canoe and walk up on the shore. With Stephen in my arm, leading Carol, I walked and they closed in all around us so tightly, we could hardly move. Their eyes were gleaming with excitement, but they were totally silent as if waiting for a signal.”

“They all began leaping in the air, brandishing their weapons and shouting for joy, and they danced around us to the beat of their drums,” he remembers on a 100 Huntley Street video.

Yes, the Sawi were savage headhunters with a taste for human flesh. But they had no intention of dining on the first white men to set foot in their region, the Southern swamplands of New Guinea. They had heard about such missionaries from neighboring tribes and how they brought medicine, steel tools and nylon fish lines to help.

Their jubilation that day was based on the recognition that help had finally come to their tribe. Little did they know that Richardson and his family brought not just tools and medicine; they brought Jesus.

Don had spent months in preparation for the day bringing his wife and child on the 10-hour canoe journey to the Sawi. He had built a home first. The tribesmen were accommodating and helpful.

But when he showed up with his wife and kid, he wondered: “Are these even the same friendly guys who helped me build my little house? Or are these hostile people that have replaced them and have something else in mind?”

The Sawi built “matchbox” structures 40 feet up in the trees, but Don built a small structure on supports in the ground.

“They’d been hearing for a couple of years very positive reports about unusually tall, unusually pale sickly-looking people called ‘Tuans.’ They’d been hoping that a Tuan would choose to come and live among them. They were eagerly welcoming us.” 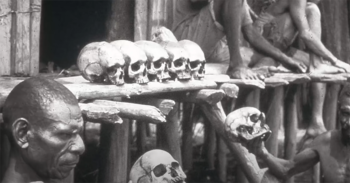 The first order of business was to learn the language without any book, teacher or translator. He started by pointing at things hoping someone would tell him the word. But every time he pointed at different objects, they always said, “redig.” Eventually, he realized “redig” means “finger.” The Sawi don’t point with fingers; they point by puckering and aiming their lips.

The patient work led to establishing an alphabet and writing a New Testament.

“They didn’t know the language could be put in written form,” he says.

Not only were the Sawi cannibals and headhunters with no concept of law, judges and punishment, they also valued treachery.

“They thought Judas was a good guy,” Don remembers. “‘He’s a master of treachery,’ they said. ‘Don, that man named Judas has done us one better.’”

When he heard their admiration of Judas in the story of betraying Jesus, Don was taken aback.

The chance to learn came when war broke out afresh among rival tribes. Arrows flew past his windows. People died outside his door as violence and revenge flared up continuously. To no avail, Don pleaded with the Sawi to make peace. But since they saw treachery as a virtue, no peace talks could be started; no one could trust anybody.

With unending carnage going on around, Don eventually threatened to leave the tribe. He would take his family and all the help he offered.

The tribe was upset. They had grown to love their Tuans and needed the medicines and tools. They thought of losing their prized missionary was too much to bear.

So, a tribal leader made an extraordinary gesture. He gave a “peace child” — his own child — to the enemy tribe. According to custom, as long as the child was alive, there would be peace between warring tribes.

This brought the much-desired peace.

But it did something else. It gave Don the perfect metaphor to make the Sawi understand what God had done. Jesus was God’s peace child to remove the conflict between man’s sinfulness and God’s righteous judgement.

Through the years, most of the tribe became Christian and became missionaries to carry the Gospel to their neighboring tribes.

And the peace child? He became the first Sawi to graduate from higher education.  He’s now a primary school principal.

Read about the headhunting tribe the Konyaks, about author Ted Dekker who grew up among cannibals in the jungle , about Borneo Bob.