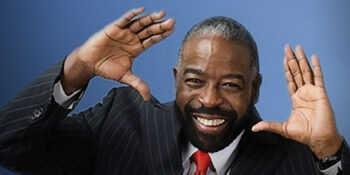 Les Brown swore he would kill the man who arrested his mother, a single woman who turned to making moonshine to feed her seven adopted kids because she became disabled at work.

When did he meet the man? By chance, RIGHT AFTER he told his son to never act out of anger.

“She was injured on the job, so she promised our birth mother that these children will never go to bed hungry. We will always have a roof over our head and clothes on,” Les recalls on an Ed Mylett video.

“I was 10 years old, and he grabbed me by the throat and hit me on the side of the head and threw me up against the wall. He said she’s back there in the room and they went back there and mama was selling homebrew and moonshine and they he said, ‘Pull up the linoleum,’ and they pull up the linoleum and she kept it under the floor of the house and they brought Mom out in handcuffs.”

While “Mama” Mamie Brown was in jail, little Les took to the streets to make money for the family. He collected copper and aluminum for recycling and helped older men carry heavy equipment.

Years later when Les Brown was running a high-paying radio show in Miami, a man tapped him on the shoulder to congratulate him. It was Calhoun, the same man who orchestrated his mom’s arrest. Calhoun didn’t recognize Les, but Les would never forget the face.

Les had just told his adult son, John Leslie, to never act out of anger. “Anger is a wind that blows out the lamp of the mind,” he said. They were at a public event.

When Les turned around to see who was tapping his shoulder, he froze. He started crying. He hid his face and rushed out of the room, got in his car with his son and drove off. He pulled over to the side of the road.

“Is everything okay?’ his son asked, bewildered.

But as he composed himself and collected his thoughts, he marveled at God’s timing and God’s way of doing things. The timing was just too coincidental to not be a miracle.

“I got that hatred out of my heart for him because you were here,” Les told his son. “I promised if I ever saw him again, I would kill him. I have to model what I’m teaching. Forgiveness is remembering without anger. I forgive him, but most of all, I forgive myself. Please forgive me, God, for carrying this anger and hatred.”

Adversity has made Leslie Calvin “Les” Brown, 75, motivational speaker of the Fortune 500, grow better, not bitter.

He was born in the Deep South, in Florida, during the time of segregation. His mother couldn’t care for him and gave him and his twin up for adoption. Mamie, who had only a 3rd grade education, took him in and six other kids.

One day when he was five, Les let go of his mother’s hand and ran to a water fountain where some kids were playing. It was 90 degrees and he was thirsty.

“My mother grabbed me by the neck, and she threw me down on the ground. She started punching me with her fists in my face and on my head,” Les recalls. “I was screaming. She had a crazy look in her eyes. I said, ‘Mama, it’s me. It’s me, Mama.”

Meanwhile a white cop swaggered over, smacking menacingly his baton into the palm of his hand

“Okay, that’s enough,” he barked. “You beat that little n—– boy enough. Now he’s learned his lesson. He won’t do that again.”

Unknowingly, Les had drunk from a whites-only fountain. By beating her son, Mamie had spared him from getting hit by the cop’s baton. 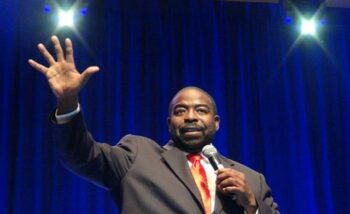 “My nose was busted and my eyes were swollen,” he remembers. “As the cop walked away, she said, ‘I’m so sorry, I’m, so sorry, Son. You can’t drink from that water fountain. It’s for whites only. When I saw that white policeman coming over towards you with his nightstick, had he hit you with that night stick, he would have had to kill me. I would have left you and your brothers and sisters to fend for yourself.”

Racism was a reality of his time. He had to sit in the crowded back of the bus and saw signs on Miami Beach that said, “No Jews, dogs and coloreds.

Another adversity was being branded “educatable mentally retarded” by his fifth grade school teacher. He flunked fifth and eighth grades.

Perhaps the teacher meant well by labeling the past’s equivalent of “special needs.” But it became a barrier for Les: he could not learn.

It also became an excuse; he wouldn’t have to try to learn.

One day, he ventured into a middle school classroom looking for a friend. The teacher, apparently confusing him for his twin, said, “Young man, go to the board and work this problem out.”

“Sir, I can’t. I’m not one of your students,“ he responded. The other students snickered at the teacher’s confusion. “He’s the D.T.,” they said. D.T. = Dumb twin.

“Do it anyhow,” the teacher insisted. 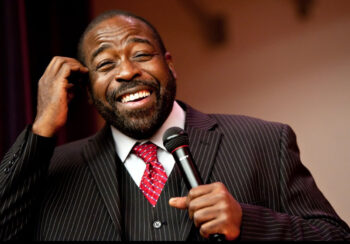 “Don’t you ever say that again,” the teacher told him sternly. “Someone’s opinion of you does not have to become your reality. Do you hear me?”

Nowadays, Les classifies the interaction as a “God moment” because his self-story got disrupted. He began to believe in himself and overcome the prior stigmatism. He stopped playing the part of the dumb kid and began to pursue dreams.

Starting as a Sears salesman and then a door-to-door salesman, Les went on to get into public radio, despite repeatedly failing on air. Eventually, he was hired as a DJ. Later he ran for and was elected to the Ohio House of Representatives. Later, he shifted his career to television and became a host on PBS.

IN 1994, Les was diagnosed with stage 4 prostate cancer. The doctor rattled off the grave prognosis: it had consumed 43% of his T1 vertebrae and had metastasized and was found in seven other parts of his body.

“Why are you smiling?” Dr. asked, incredulous. “ Did you hear what I just said?

“Why are you smiling?”

The doctor looked at the nurses and shrugged.

“This is a strange one,” he muttered.

Les’s heart was full of faith, not full of fear.

Eventually even the doctor encouraged him: “You got this. I don’t tell patients that they’re ‘terminally ill.’ What I say is my knowledge and my ability and my skills have terminated; now you and God figure this out. He determines the prognosis.’”

Though the doctor gave him two years to live, 27 years have passed and Les is still going strong.

Now a motivational speaker and author, he’s heralded as the top of the heap on the speaker’s circuit because of his ability to tell stories, cry tears and draw conclusions to inspire.

“When the end comes to you, let it find you conquering the new mountain, not sliding down an old one that you previously conquered,” Les says.