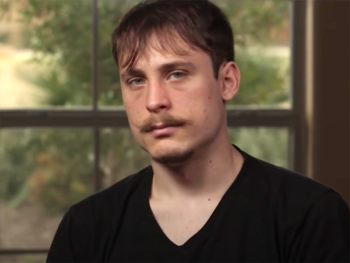 By the time Graham Cottone was finally diagnosed with Asperger’s at age 10, it was a tremendous relief. Before that, his parents didn’t know what was wrong and they blamed themselves. He was constantly punished, made fun of, and friendless.

“He was hard. He was very, very hard,” Lore Cotton, his mother, says on a 700 Club Interactive video. “You love your children. They’re your children. We disciplined out of anger on several occasions. It was scary to think, ‘What are we doing? We’re spanking all the time.”

“It just was so overwhelming. I remember just going in my bedroom and being so exasperated,” Lore says. “I just fell down on my bed and just began sobbing.”

Out of her prayer that day, God impressed on her heart: Graham is going to get it.

Despite what Lore felt God impart, she didn’t see any encouraging signs. To the contrary, Graham went downhill fast.

At 13, he began using marijuana. He began cutting himself to relieve anxiety. He started fires in the house. He got into a physical fight with his dad, Lore recounts.

“He ran out and got a rock and he threw it and he hit me in the head,” says Michael Cottone, the father. They called 911, and the police intervened. Graham was arrested and jailed and placed under a restraining order to stay away from home.

“We know you’re going to let him come back,” the cops told the parents at the time. “But we’re not.”

Not long after, Graham experienced some sort of emotional breakdown and broken into a house in Texas.

He grew up in jail and mental hospitals.

“I wanted Graham to have peace and have joy,” Lore says.

Graham moved to Colorado, then hitchhiked to Oregon.

“We were actually on a vacation in Mexico,” Lore says. “Graham called us just half crazed, he was crying and screaming and mad because he had run out of all of his medications and he was at a hospital and they wouldn’t give him any more medications.”

Lore offered to wire him some money but said she couldn’t do much else.

Graham wouldn’t answer his phone and soon lost his phone. There was no way to get ahold of him.

“It felt really bad. It felt like the end,” she says. “All we could do was pray. I just told God, ‘He is yours. He’s always been yours. I want so badly to go rescue him, but I know you brought me here. You took me out of the way. I need to trust and let You do your thing.’”

After the vacation, Lore got a call from her son in Sacramento, California. He had hopped a freight train down from Portland with a group of vagabonds.

“I lost everything,” he said. “I knew I didn’t know anybody for thousands of miles, but I need God.”

Graham surrendered his life to Jesus and was transformed by the Holy Spirit.

He felt a sudden and inexplicable compassion and love for others.

Ironically, this annoyed his group of stragglers to the point that they kicked him out of their group.

“The people I was hanging out with couldn’t stand to be around me,” Graham says.

Today, Graham is off all medication. He’s walking with the Lord.

“Jesus is the only source of peace that I have found,” Graham says.

Jesus said to them, “They that are whole have no need of the physician, but they that are sick. I came not to call the righteous, but sinners to repentance.” Mark 2:17