As a self-made man focused on providing an abundant lifestyle for his family, Jim Woodford had no place for God in his life.

However, Jim is married to a strong Christian, Lorraine, who prayed for him diligently, according to a report by CBN. “God please change his heart,” she prayed. “Bring him to know Jesus Christ and just make a change in him and deal with this materialistic way.”

Jim was diagnosed with Guillian-Barre syndrome at age 61, a rare, incurable autoimmune disorder in which the body’s immune system erroneously attacks the peripheral nerves and damages their myelin insulation.

The syndrome results in “unremitting, electrical current pain in every part of my body, accompanied with paralyzing inability to move,” Jim told CBN.

Lorraine saw changes in his personality as the condition worsened. “He was just getting to be a very angry person. The pain was just consuming him.”

Despite the ordeal, Jim refused to turn to God. At a certain point, Lorraine began to get impatient. She said, “God, I’ve been praying, but I haven’t seen any change. Maybe You just have to break him to remake him.”

In April 2014, Jim went to inspect a field he wanted to sell. To manage his pain that day, he had taken four times the normal dosage for his medication. As he sat in his truck, he felt a burning sensation in his legs.

“Suddenly I realized I couldn’t breathe,” he recounts. “And it was as though the cab of the truck was filling with water. As I’m about to draw my last breath, from somewhere inside of me that I didn’t even know existed…I cried out ‘God! Forgive me! Forgive me!'”

When Jim didn’t return home for quite a while, Lorraine got worried and called the police. The authorities discovered Jim slumped over in his truck, unresponsive, and rushed him to the hospital.

Lorraine called upon a circle of prayer warriors to lift him up.

At the hospital, the lead physician hit her with jolting news: “Your husband is severely brain-damaged. There’s no brain activity there. We have him on full life support because his organs have all shut down.”

“There is no way to bring him back,” the doctor told her.

But something remarkable happened to Jim after the doctors had given up all hope. Whether in the body or out of the body, Jim was supernaturally transported to a precipice between Heaven and Hell.

“I look to the right and there’s this incredible vista of beautiful flowers and meadows. And I turned my vision to the left and that beautiful green grass went from green to brown to scorched to black and dropped off in a crevasse. I saw the most hideous creature you could ever imagine. And I fell back in abject terror. The look of hatred in its eyes, for me and all of mankind.

Jim had the presence of mind to recognize he faced a stark choice. “At this point, I turned toward the light and I raised both hands this time, and I cried out, ‘God, help me. Help me!'”

His subsequent testimony is that three angels gave him a tour of Heaven. “I realized I was looking at none other than Jesus Christ, the Son of God. And He looked at me with those violet eyes, and all I heard was, ‘James, what did you do with the life My Master gave you?’

“I had no answer…But as I looked into His eyes, He smiled at me. He smiled at me. He knew me. I saw such intense love and forgiveness for me, who deserved nothing. And that was the moment…I was His forever. Whatever was about to become of me, I was His. I loved Him and He loved me.”

Like many who have experienced visions of Heaven, he wanted to stay, but God had other plans for him.

Jesus imparted to him: Go back and tell your brothers and sisters of the wonders we have shown you.

Suddenly he was back in the hospital on a gurney and began to scream, which startled some of the nurses.

A nurse rushed to Lorraine and told her to come with her.

“I thought he was gone,” she recounts.

Jim was overwhelmed at the sight of his wife. “Lorraine,” he cried out. “I saw Jesus, and Jesus has horses.”

The more she talked to him, she knew he was in his right mind and that God had restored him.

Suddenly she realized God had answered her prayer to “break Jim to remake him.”

As Jim began to follow Jesus and grow in his faith, he became a gentler man.

Jim still has indicators for Guillan-Barre syndrome, but miraculously, he is completely pain-free. 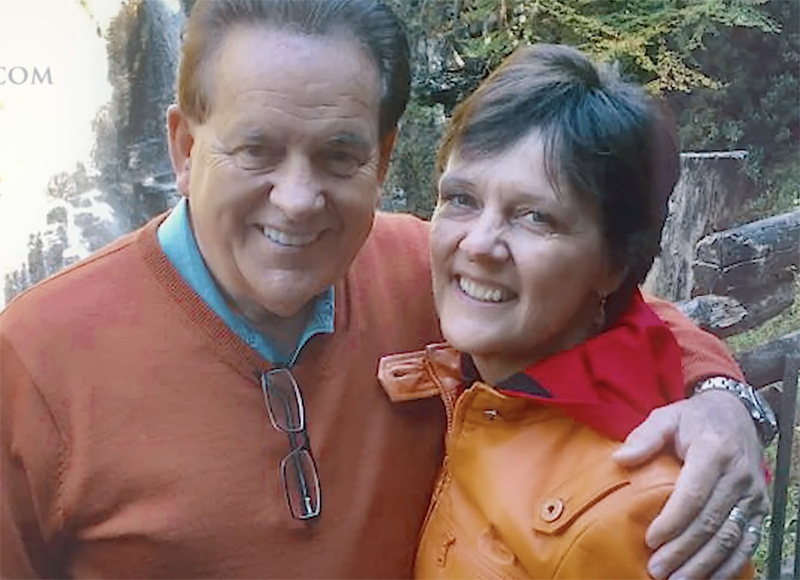 He also has become a bold witness for Jesus Christ. “All the things that I thought were just some crazy old legend…it’s real. It’s a dimension that exists. Something far beyond anything I could have ever imagined,” he says.

“You have to open the door of your heart to let Him in, and the door of my heart has now been opened.”

Behold, I stand at the door and knock. If anyone hears my voice and opens the door, I will come in to him and eat with him, and he with me.  Revelation 3:20