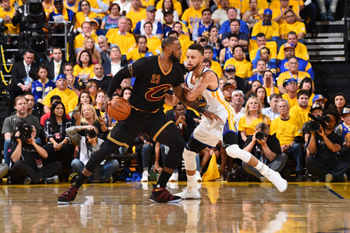 Wrong! The Golden State Warriors just buzz-sawed their way through the 2017 NBA finals winning four out of five games.

Pundits are busily babbling about the sheer talent bursting from the team. But there is another critical factor that helped make LeBron and crew look like school children. A majority of the players, and especially their leaders, are strong Christians who attend chapel regularly. The Gospel Herald called them “God’s team,” and World Religion News, “the NBA’s men of God.”

Does God favor one team over another? No. Do prayers help win games? No. Does God care about basketball? No, He cares about souls.

So what the heaven does Christianity have to do with their resounding win? Well for one, Christianity tends to make players humble, and humility limits ego clashes and ratchets-up team dynamics. It bonds players as brothers.

So when juggernaut Kevin Durant, a devout Christian, snatched the spotlight from 3-pointer ace Steph Curry, also a firm believer, no feud erupted. Instead, the court erupted with a volcanic version of vying for the title. 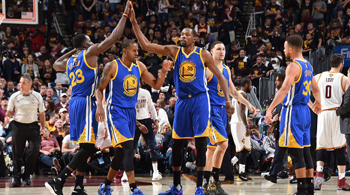 “That’s just something that we all have, a spiritual connection,” Durant told the San Jose Mercury News last year. “Seeing all the guys that they have in chapel, you can tell that they really love Jesus.”

The Warrior locker room contrasts markedly from other sports quarters where profanity and arguments are the norm, the Mercury News reported. They don’t blast raps with cursing and testosterone. Players have a good attitude. They don’t get into scrapes with the law for DUIs or sexting.

“We got a team full of believers,” Andre Iguodala said Christian Today in 2015. “We all go to chapel before every game. We all believe and we all say God has a way for you, a purpose for you. This is my purpose.” 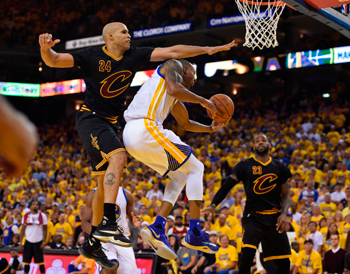 They play and pray.

Draymond Green, who was tasked with stopping the unstoppable Lebron James, is also unashamed of Jesus. “I may lose a friend or two, but I will never lose my faith,” he said in a YouTube video. “One day this world is going to end, and I want my Lord and Savior to know that no matter what, ‘I can’t lose You because if I lose You, where am I going?'”

In Game 3, it seemed like the Cavaliers were going to get their first win. Lebron and Kyrie Irving were playing strong, with 39 and 38 points respectively. With an iron grip, they held their lead into the final moments of the 4th quarter.

But then they slipped, and the patient, persistent Warriors erased their 6-point lead to steal the game in the final seconds. Durant cheekily made a 3-pointer right over Lebron to turn the tide. It was as if he wanted to contend for league MVP with a brash statement. The Cavs were left to mope on their home court.

There was talk of the Warriors doing what nine teams have done: sweeping the finals in four straight games. But in Game 4, the Cavaliers muscled their way back into competition with some exceptional play. It was such an impressive performance that some sectors wondered it the Cavs could mount a stunning come-from-behind win like they did last year.

This year’s final was the first time in the NBA that the same two teams matched up three years in a row. In 2015, the Warriors humiliated the Cavs and won the championship for the first time in 40 years, only to be avenged last year.

Does being a Christian mean you’re perfect? Does having a majority of Christian players guarantee that there will be no conflicts? To both questions, the answer is, of course, no. Christians are forgiven, not perfect, and no one is immune to the temptations of grandeur in the NBA.

But followers of the Bible have a greater chance than non-believers to crucify the flesh and let group interests prevail over personal interests. Simply put, Christian ethics can improve team performance.

Indeed the New York Times observed: “The Warriors, despite their mass of individual talent, were a true collaboration.”

Durant said it this way on Yahoo News: “Andre Iguodala, he continued to preach that every single day: It’s all about the group, and if your intentions are good, then that means as a team we’re moving in the right direction. Andre told me: It’s your time, go take it. No, it’s about us. It’s about us.”

And Coach Steve Kerr concurred: “These guys are so gifted, and so committed to each other, and so unselfish.

Consider the powerful Lakers of the early 2000s. They three-peated NBA championships 2000-02 but the widening rift between veteran Shaquille O’Neal and upstart Kobe Bryant led to their stinging loss against the Detroit Pistons. Since they couldn’t play together, the Lakers off-loaded their aging star in concession for their youngster. Lakers coach Phil Jackson wrote about team troubles in a book titled The Last Season: A Team in Search of Its Soul.

When players focus on self-aggrandizement, they have no soul. When they focus first on the condition of their souls, other issues have room to find a remedy.

In the world of journalistic hyperbole, some are calling this team of Warriors the “gods of basketball.”

But they know the real God and that He deserves the glory.

Michael Ashcraft is pastor of the Van Nuys Lighthouse Church.