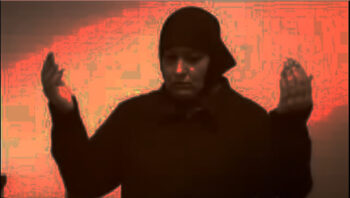 Nelly, a North African woman living in southern Europe, had a brain tumor and was not expected to survive much longer, but Jesus personally appeared to her in astonishing ways that upended her life.

Knowing her time was short, Nelly visited two Christian neighbors affiliated with Pioneers and asked them to visit her husband and young son after she died.

The Christian workers encouraged Nelly to pray to Jesus and ask Him for help.

Due to her Muslim background, Nelly had never prayed to Jesus. But the nature of her illness prevented her from performing her daily Muslim prayer rituals. So she went home and for the first time in her life and prayed to Jesus, according to the account by Pioneers.

As she began to pray to Jesus, something remarkable happened.

Jesus personally appeared on her balcony, walked through her two doors and spoke with her.

“What do you want,” He asked in her heart language, a North African dialect.

“I have a headache because there haven’t been any cigarettes in the house for days,” she told him.

Jesus left her as abruptly as he had appeared. Nelly went into the kitchen to make herself a cup of coffee. There, in the cupboard, a package of cigarettes had appeared!

“It took us a minute to absorb this,” the Christian workers reported in the Pioneers story. “A North African Muslim woman asked Jesus—who appeared to her bodily—for cigarettes. And He gave them to her. We thought immediately of Christians back in the States who would discount this story because smoking is a sin, right? I mean, how do you reconcile God giving a gift that is frowned upon in many Christian settings across North America?”

It seems Jesus—in ways that often surprised and confounded His observers—met Nelly where she was, and then began to reveal more and more of Himself to her.

Nelly had seen “The JESUS Film” and other Christian movies on satellite TV. “She is illiterate and was therefore unable to gain knowledge of Jesus through the Bible,” the Christian workers explained in the Pioneers account.

In the months that followed, Jesus continued to visit Nelly. “She said that she was not sleeping or dreaming, but that Jesus was there physically and spoke to her, encouraged her, consoled her. She said that once Jesus entered through the balcony door, spoke with her, and left through the front door.”

Her husband heard the door open and shut but never saw Jesus himself.

Then one day Jesus appeared to her and placed His hand on the side of her face that was paralyzed by the brain tumor. “He massaged her cheek and told her that very afternoon she would go to the doctor and everything would be fine. Indeed, her paralysis disappeared and a scan revealed no tumor,” according to the Pioneers account.

Jesus had miraculously healed her!

Jesus told Nelly to believe in Him. As a result of these remarkable encounters with the risen Christ, she was born again. Nelly told the Christian workers, “Jesus is the Son of God and He’s in my heart. He will never go away.”

A year after Nelly placed her faith in Jesus her husband also believed. Then other family members from North Africa also began to follow Jesus.

Recently, on a Sunday morning, her husband and son-in-law played an Arabic Christian CD and worshiped in their kitchen.

Nelly – in the living room — asked the men to turn up the music so she and the other women could worship too.

But as a result of the loud music, a man began banging on their front door and yelled, “Are you a Christian? This is a Muslim building!”

Later, Muslim men living in the building confronted Nelly’s husband and son-in-law on the street and gave them a severe beating.

“Nelly’s family is forced by the threat of physical harm to hide in their apartment,” the Christian workers reported to Pioneers. “They must be very careful as they move around the neighborhood, because their Muslim neighbors now know they believe in Jesus.”

“They are seeking shelter elsewhere, but don’t feel hopeful. They are in very real danger.”

In response to these threats, Nelly said, “I have great faith because I know that Jesus is alive.”

The Christian workers mentoring Nelly are praying for her safety. “As I ask God to protect Nelly, His servant, I also ask Him for faith like hers, because I know too that Jesus is alive. And now I know it in a new, profound way, thanks to my North African sister who lives in southern Europe. May Jesus, in His sovereignty and mercy, draw many more North Africans to Himself—whether it is through the gift of cigarettes or the gift of healing or the gift of persecution.”

“And may we in the West stay on our knees for our Muslim-background siblings in Christ and the workers laboring for their sake in His name.”

To learn more about Pioneers work in Europe, go here