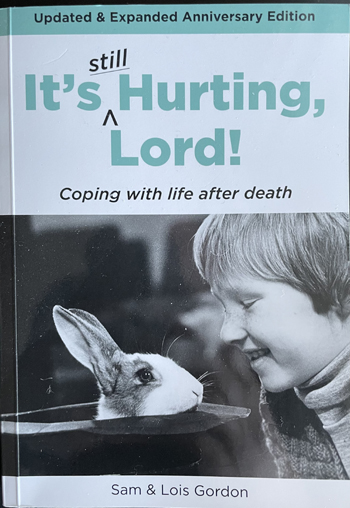 When Sam and Lois Gordon lost their only child in a tragic road accident, their world fell apart.

A Christian teenager with great prospects, Timothy’s short life ended suddenly when he was knocked off his bicycle doing a paper route, aged just 14.

With a host of hobbies and a library of books – even including the autobiography of Moshe Dayan, Israel’s former Defense Minister – he lived life to the full. So why was it cut short?

Thirty-five years on, Tim would have turned 50 last September, and his parents still have no answer to that question. But they are still trusting God, as they have outlined in It’s Still Hurting, Lord! (an updated version of an earlier account written not long after their tragic loss), published by Truth for Today.

Gracing the front cover is the Daily Mail’s delightful photo of their boy with a pet rabbit emerging from a top hat after winning the Young Magician of the Year award!

The authors admit, however, that there is no magic formula for coping with grief. Indeed, they were brought to the brink of utter despair. But Jesus, the light of the world, steered them through the darkness.

Originally from Northern Ireland, the couple have spent much of their adult life on the UK mainland, first in Scotland and then in England.

Sam is a globe-trotting author and preacher, but is adamant that it’s OK to ask God why in such circumstances. After all, you’re in good company. For Jesus himself, a “man of sorrows, acquainted with grief” (Isaiah 53:3), cried out in agony from the cross: “My God, my God, why have you forsaken me?” (Matthew 27:46, Psalm 22:1). It’s OK to cry and get upset. In fact, it’s part of the healing process and the Lord collects all our tears in his bottle (Psalm 56:8).

I was most impressed by the ‘grief therapy’ Lois received which involved looking through scrapbooks and photos of her son, and allowing her emotions free reign.

Sam was in Scotland, some 300 miles from their home in Loughborough, Leicestershire, when he heard of the accident, with his only son lying in hospital on a life-support machine.
He was to have preached that night on Genesis 22, where God asked Abraham to offer up his beloved son, Isaac – a picture of Jesus at the cross where, as the only Son of his heavenly Father, he gave up his life for us all. The link was pertinent enough, but grievously painful nevertheless.

For Sam, a breakthrough came with a vision of Calvary (where Jesus died) summed up in the words of the gospel song: “And when I think that God, his Son not sparing, sent him to die, I scarce can take it in; that on the cross, my burden gladly bearing, he bled and died to take away my sin.”

Yet the searing heartache has ultimately had a positive outcome in that both Sam and Lois have had to call on God all the more because of their struggles, strengthening their faith and enabling them to empathize with others going through similar trials.

For someone who has always had a heart for Israel (he’s a former CEO of Messianic Testimony), it seemed apt that in a contribution by the late Derick Bingham, mention was made of Betsie ten Boom, who perished in a concentration camp due to her family’s love for the Jewish people. As she lay dying, Betsie said: “There is no pit so deep that Christ is not deeper still.”

Sam and Lois have expressed similar sentiments. As the book records, “In their darkest hours, they have someone to whom they can turn, and someone who will always see them through – his name is Jesus.”

The book is available from Sam’s website at www.truthfortoday.co.uk