At the most recent National Religious Broadcasters’ convention held in Nashville, one evangelical leader pulled me aside and proceeded to castigate the highly popular drama series The Chosen, because of the influence of a number of Mormons in its creation and distribution.

When I visited the set of The Chosen for the first time in August, built on a sprawling Salvation Army camp south of Dallas, I was highly impressed – especially by their re-creation of first century Capernaum on the shores of a freshwater lake. They also erected a massive indoor soundstage for interior shots, to help control the sounds that leak into the production from pesky planes flying overhead.

I must admit, I was surprised by the level of LDS involvement in the series. The president and executive producer of The Chosen both have Latter-Day Saints faith backgrounds.  The series was originally distributed through the VidAngel platform, and is now on its own platform operated by Angel Studios – owned by two brothers who happen to be LDS. The Chosen also uses a secondary set in Goshen, Utah, owned by the LDS church, for their Jerusalem shots.

Brad Pelo, president of The Chosen, lives in Utah, graduated from Brigham Young University, and has 12 children. Pelo, a lifelong Mormon, has served as a bishop in the church twice. He co-founded i.TV, the company behind tvtag. He also is one of the founders of Ancestry.com. Pelo worked behind the scenes to get approval from the LDS church for The Chosen’s use of their Jerusalem set in Utah, something never previously granted to anyone outside the church.

As a young man, he served on a Mormon mission in Grand Rapids, Michigan, an experience he found challenging due to a number of adverse encounters in “Dutch Reformed” country. “It always felt like every interaction was a defensive one, that I had to defend why I was a Christian, why my church was named the Church of Jesus Christ,” he told God Reports.

But Pelo believes we’re in a new era. “That day is long past. I mean, there may be some (negative) sentiment out there, but it’s such a minority. What happens now literally every day in my life, is I find myself as a Latter Day Saint, sitting at the table with other faith leaders and influencers, speaking the same language, believing in the same Jesus, looking at the same Bibles, and just being full of what we would think of as the Spirit of God in all of that.”

Some evangelicals would take issue with Pelo’s contention that Latter Day Saints believe in the same Jesus. There are key differences between the LDS Church and mainstream Christianity regarding the Trinity, their views on salvation, the ability of humans to become gods and goddesses after death, an open scriptural canon that includes The Book of Mormon and other writings by their prophets, and the secret ceremonies conducted in their temples.

Executive Producer of The Chosen, Derral Eves, served as a Mormon missionary in Paraguay and subsequently served the church as elders quorum president, bishopric counselor, bishop, and counselor in a stake presidency. Derral and his wife live in La Verkin, Utah, and have five children, according to leadingsaints.org.

The writers of The Chosen, Dallas Jenkins, Tyler Thompson, and Ryan Swanson, rely on three scholars to keep their dramatic portrayal of Jesus within certain boundaries. One of the writers, Tyler Thompson, told God Reports he appreciates the oversight. “Thank God we have these scholars, a Messianic Rabbi, a Catholic priest, and Protestant academic that read over our scripts and give us feedback. That’s really nice to have those guardrails, where the car’s not gonna go off the cliff, because these guys are there making sure.” Thompson attended Moody Bible Institute, studying the Old Testament as an undergraduate. Swanson grew up Methodist, and has a minor in religious studies.

The three scholars serving as consultants for The Chosen include Fr. David Guffey (a Roman Catholic priest), Rabbi Jason Sobel (a Messianic Jewish rabbi), and Doug Huffman, (a professor of New Testament at Biola University).

Perhaps the greatest controversy arose concerning episode five in season two, when Jesus is preparing and indeed “practicing” for the Sermon on the Mount, asking Matthew for feedback and advice in his preparation.

Huffman acknowledges the issues raised by the scene. “What was particularly difficult for many viewers is the idea that Jesus as the divine Son of God would work on constructing a sermon rather than merely knowing (omnisciently) what to say on the spot without any preparation at all.” 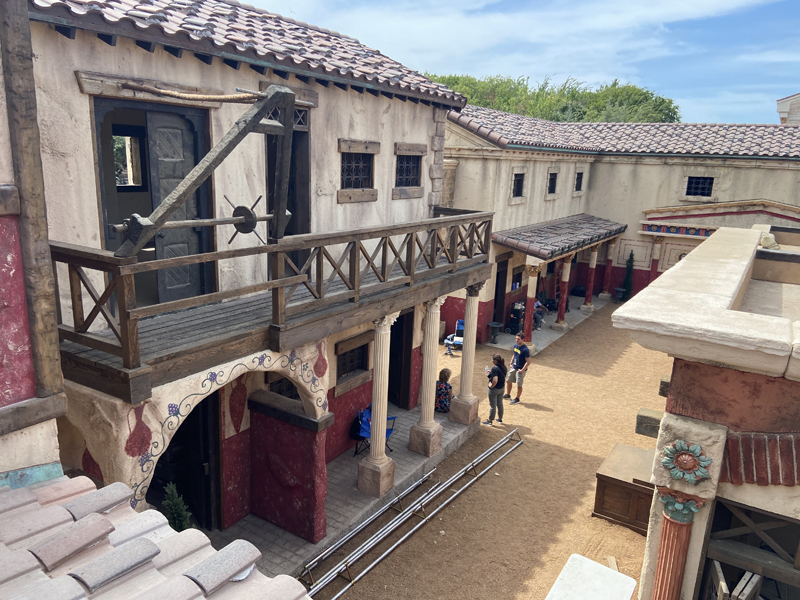 Huffman defends the scene, however. “In His humanity, the New Testament indicates that Jesus did not know all the details of His second coming. And yet, in His deity, Jesus knew ‘all things.’ The question of Jesus’s omniscience and yet being human is the same issue that came up in the 20-second scene mentioned above,” he notes.

“The New Testament is clear that Jesus ‘increased in wisdom’ (Luke 2:52), which indicates that He went through the usual learning process of children. It seems that this would include things like walking, talking, eating, reading, writing, etc.,” he continues.

“Scripture even says that He ‘learned obedience’ (Heb. 5:8). But it is careful to note that He can ‘sympathize with our weaknesses’ as ‘one who in every respect has been tempted as we are, yet without sin’ (Heb. 4:15). All that to say, it seems reasonable to presume that One who could learn to talk, to read, to write, and to obey without sinning could also learn how to construct sentences and put together a sermon without sinning.

In the last quarter century, there have been high-level discussions between evangelical and LDS scholars exploring their differences and commonalities. Two books emerged from those discussions: Craig L. Blomberg and Stephen E. Robinson, How Wide the Divide? A Mormon & an Evangelical in Conversation (Downers Grove, IL: InterVarsity Press, 1997); and Richard Mouw, Talking with Mormons: An Invitation to Evangelicals (Grand Rapids: Eerdmans, 2012).

If the LDS church is not influencing the content of The Chosen, perhaps the unusual collaboration with its adherents, and a large LDS audience viewing the series, may do more to attract Latter Day Saints to an authentic portrayal of Jesus than any overt outreach efforts by evangelical leaders. This may be part of Dallas Jenkins’ thinking, and is the best possible interpretation of the awkward alliance.

Huffman subscribes to this view. “Clearly those viewers of the LDS faith are interested in ‘the same Jesus’ as people of traditional Christianity. Indeed, one of the goals of The Chosen is to get more and more people interested in the Jesus of the Bible, to get them to rethink their beliefs and to go to the Bible to see if their beliefs about Jesus are correct. From my own evangelical Christian viewpoint, if the Lord uses this popular TV show to accomplish that goal, that would be a good thing.”