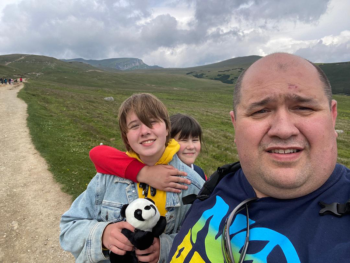 Vitalii Glopina may never know what the three Russian gangsters sent to kill him saw as one raised the knife to stab Vitalii.

“They turned white. They were shaking,” he says on a Virginia Beach Potter’s House podcast. “He threw the knife down. They ran out of there. In that moment, I knew there was a God.”

Well, of course. He had just prayed that if there were a God, to rescue him.

That was the end of atheism for Vitalii, who blamed God for the death of his sister and played out his anger against the injustice done to his family by getting into drugs, alcohol, and easy money.

With his sister growing up in Ukraine, Vitalii had a peculiar hobby of looking for mushrooms On one occasion, he asked his sister to get out of work early so they could get a headstart on their search. “I felt responsible for her death,” Vitalii says.

On that fateful night, his sister was kidnapped. They found her injured and took her to a hospital where she lingered between life and death for two days. Young Vitalii pleaded with God for her life, and when she died, he vowed to become an atheist.

From 18 years old, he pour his life into substance abuse and crime. He joined a Russian mafia gang and made good money as the key man; he was the one who broke into cars and got them started.

He was a brainiac for technology. He got straight A’s in school, but he also had keyed all the rooms and could break in at will to classrooms and offices.

When he graduated high school, he got a scholarship to Romania, where he would learn cybernetics.

He vowed that in the new place, he would turn over a new leaf. His vow to be sober and make good lasted only three days, within which time he found a dealer and the mafia and fell back into his old habits.

Vitalii would show up and get into the BMW7 series vehicles. Sometimes they would steal the car outright, sometimes they would just steal the parts. When the insurance paid for new parts, his team could fill the order through a front company and rebuild the car they themselves had disassembled.

It was lucrative work, but every night Vitalii was hobbled by crippling guilt.

“I had to be stoned to death to be able to sleep,” he admits.

His penchant for heavy substance abuse caused him to wind up with overdoses: three times on drugs, twice on alcohol. A triple dosage brought him to the hospital on Christmas Eve, where he confessed to hospital staff where the drugs were.

The cops raided, and he lost $5,000 worth of merchandise.

All of sudden, Vitalii was indebted to the mafia, and they weren’t too forgiving toward his slipup. His former buddies became his owners; he had to slave away doing endless chores for all of them to pay back what he owed. Chafing under the relentless exploitation, he threatened to go to police.

Resorting to hardball negotiation did nothing for his cause. They beat him severely and he convalesced for two days.

Then the hitman came with two assistants.

“I saw how this guy works,” Vitalii says. “He was a man with no scruples. He just did his job.”

After the two helpers tied him up Vitalii, the assassin raised his knife to complete the job.

“I cried out to God,” Vitalii admits. It was the God he had vowed not to believe in after his sister’s death.

To his amazement, the fearless killers instantly turned white with fear. They began shaking. They threw down the knife. They ran.

What did they see? To this day, Vitalii has no idea.

He was still bloody when he showed up at the nearest church, an Eastern Orthodox church. He wanted very desperately to confess his sins.

When he got home, he grabbed the Gideon’s New Testament whose pages he had previously used to roll up drugs to smoke. The next page was Mark 3, and he read eagerly. It said Jesus had brothers.

So when he attended the Eastern Orthodox Church on Friday and the priest extolled the supposed eternal virginity of Mary, Vitalii knew something was wrong.

He left the church and went wandering. In the plaza, he saw a Christian group with a guitar singing and giving testimonies. He approached, and the man asked him if he were to die today, where would he go?

Vitalii knew exactly where he would go, to Hell.

It actually gave him comfort. It was comforting because the concept of final justice meant the killer of his sister hadn’t gotten off free from punishment.

“But do you want to go to Hell?” the man asked Vitalii. He then presented the Gospel: We are all sinners, we all deserve Hell, God sent his Son to die for us and satisfy the righteous requirements of the law, if we accept Jesus, we can be forgiven of our sins and start a new life in him.

Thus, the Bible he previously rolled up and used to smoke drugs became the vehicle for Vitalii’s salvation.

Vitalii’s gang all got arrested, so there could be no more repercussions for Vitalii. It was a God-organized thing.

Vitalii hasn’t missed church since then, and today is a pastor. He pastored in Ukraine, in Moldova and is now on sabatical in Tempe, AZ, until the war dies down, at which time he will be re-launched into Ukraine.