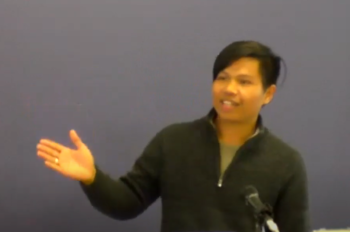 At 16, Chetra became a Buddhist monk in Cambodia. “It was my pride to become a monk,” he says.

But just five years later in 2011, he abandoned the monkhood because “I felt so empty inside. I wondered what my life was for,” he says on a Christ Church of Ewell video. “I felt so lost in my heart.”

In 2021, he got a job in a language school that taught Cambodian to foreigners, most of them missionaries. On his first day at the school, he had to sit through a Bible study.

“I didn’t really know what Christianity was,” he says. “I only thought I can’t believe in Jesus because Buddhism was precious to me. I thought Jesus wasn’t God.”

He stayed in the school for six years, attending Christian Bible studies but never believing. He had lots of Christian friends, all of whom were praying for him.

In 2017, a certain girl named Julia was more insistent. On Sunday, he said, he liked to sleep late, waking up at noon, well after the morning service was over.

She invited him to an evening fellowship. “I didn’t have an excuse,” he says. “I didn’t go to sleep so early.”

He sat as far away from the group as possible – in the kitchen. Then slowly he moved closer, to the kitchen door. Still, he was resistant. “Buddhism was my pride, so I couldn’t lose my pride,” he says.

But something happened in 2018 during the Pchum Ben, a 15-day festival in Cambodia that honors the previous seven generations of ancestors which are believed to be released to roam the Earth.

On these Holy Days, everybody has vacation. On Saturday during incense burning and chantings, Chetra started viewing his practices strangely. “Wow,” he observed. “What are these things?”

His heart was drawn more and more toward Christian doctrine. So he came back to work early on Sunday to attend church. On his way back from his village, he was praying on his motorbike. He felt deeply his sins and cried for almost the entire two-hour road trip.

A spirit of repentance fell upon him, and the Holy Spirit enabled his heart to believe. He surrendered his life to Jesus as his Lord and Savior and was born again.

He is grateful for his friend’s persistence. “Julia didn’t give up on inviting me to the church,” he says.