Ironically, his dad, a devout Buddhist, left the family so that everybody “could be happier.”

Ahn Le felt anything but happy. “I felt panicked,” Ahn says on a Fishers of Men Halifax video. “It didn’t make me happy. It broke everything I knew.” He even cried out to the supernatural he never knew: “If there’s a God, please stop this now.”

Meanwhile at school, Ahn learned about the survival of the fittest, a tenet of evolution. “I liked this idea,” he remembers. “I realized there’s no god because you call out to him and he doesn’t answer. You just got to get by. That message resonated with me: I’m going to be so tough, I’ll never be in this position again where I’m being left, where it’s going to break.”

He vowed to find his happiness, to make money and buy the things he wanted.

Soon he discovered pornography, first in magazines and then with the advent of the Internet online in the 1990s. “When I found these magazines, it was like a drug,” he says. “When I got ahold of my first Hustler magazine, I was like ‘Wow.’” 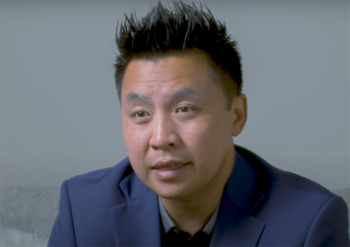 He dove in unabated. But while he desired a beautiful woman, he was too shy to approach beautiful women. “They were like goddesses to me,” he says. “I couldn’t talk around them. I was gazing from afar with just a lust for them. But deep inside I was l like, ‘Why would that girl ever like me?’ I had a low self-confidence.”

The pornography imbued shame in him and brought his self-confidence even lower, he says.

While he had a secret addiction, he projected an image of being a good guy.

In college, he overcame his shyness and began approaching girls, even to the point that he moved in with a girl. “That lust in me destroyed that girl,” he surmises. “She was a Christian. I convinced her not to listen to her mother. I convinced her to move away from her church. She was such a sweet girl, and I just took her and demoralized her.”

He ignored the promise ring he had given her. “For me, she wasn’t enough,” he acknowledges. “My lust needed more.”

Ahn got into clubbing and one-night stands. “It was never enough,” he says. “It led to depression. I was feeling depression, but I didn’t link it to my addictions.”

Strangely, the girls who most attracted him were Christian girls, whom he would pretend to listen to about God but would be “little by little be grooming them away from the church,” he explains.

Systematically, he turned them away from their faith and got them into extra-marital sex. Eventually, he realized that atheism meant there was no need to project an image of being a good person. “I make my own beliefs,” he says. “In college you’re taught, What is truth? There is no truth. It’s all perspective. It’s all relative. There is no true good, no true bad.”

Ahn was on the hockey team in college and saw all his teammates indulge in unrestrained hedonism. He wanted to become a “bad person.” “Why am I the designated driver?” he asked. “I can do worse. I’m big and bad. Survival of the fittest. You gotta be tough. You gotta get what you want.”

But his depression deepened. “If there’s no purpose in life, why am I working so hard at college?”

One day while passing a church, Ahn saw 777 on his odometer and being superstitious thought, Oh good luck!

“Why don’t you go to church?” a random thought invaded his mind. He had avoided his grandma for years to not have to go to church. He fought against the thought.

A month later in a breakup that led to more depression, he passed the same church and saw 777 on his odometer again. “Why don’t you go to church?” flashed across his mind again, and this time he thought, “If I did go, maybe I would meet a cute girl.”

He sat in the back and didn’t talk to anybody, but an older guy tapped him on the shoulder. He was very kind.

“Are you here by yourself?” the elder said to him. “Come and sit with my family.”

His daughter was cute. “I was like dang, jackpot,” he remembers.

Ahn kept going to church to get the daughter, but when he asked her out, she said no. “I believe she was praying for me,” he says.

In turn, she invited him to attend a retreat. Thinking it might be a way for him to win her heart, he acceded. If not the first girl, he might find some other girl who was cute.

On the trip to the retreat center, the divide between the seriously committed Christian guys and him became evident. They listened to “weird Christian banjo music” while Ahn had techno pop. They cracked innocent jokes that Ahn didn’t even understand; he told perverted jokes that he alone laughed at.

In his mind, he felt judged. “I started getting angry at these Christians though they never said anything to me,” he says. “Thoughts started coming to my mind like, if there’s Heaven, they’re goin to Heaven and you’re going to…

He forcefully broke off the random thought.

“I had a violent reaction on the inside: No, Hell is not a real place. Hell is a place that is designed by man to control the masses by being brainwashed and controlled by a few elites,” he thought. “I’m not giving in to that. No, Hell’s not real!”

Up on the mountain, they broke out to seek God individually in nature. Ahn, with a gallon of condescension, just watched from the bench while each Christian went off to meditate, pray and read scripture.

When they gathered to share what God had told them, Ahn was quite surprised by the profound life philosophy they uttered.

Still, the daily practice grated Ahn until on the final day of the camp, Ahn, who was anxious to get off the mountain and back into the club, thought he’d give it a try. He opened his Bible by chance to John 1:12: “But to all who did receive him, he gave them the right to be children of God, to those who believe in his name.”

So, he uttered a prayer to receive Jesus, but really he did it to ridicule the Christians. He had lost interest in getting girls and wanted to humiliate the guys who were getting on his nerves.

At group share, Ahn said he accepted Jesus. He did it sneeringly, as if to prove that the Bible was a hoax and nothing had happened.

He expected more than a few of the guys to be outraged. That’s what he wanted to do.

Instead, everybody was super excited for him. He had accepted Jesus finally!

On the road down the mountain, Ahn continued the sarcasm until one of the brothers got upset. “Judging by the things you’re saying, it sounds like you didn’t really put your faith in Jesus,” he said.

To offend the Christians is what Ahn wanted. But in that moment, another one of his weaknesses flared, a volatile temper. His fists clenched and he was going to clock him for the gentle rebuke.

“Suddenly time stopped. It was like I was in my body and I wasn’t in my body,” he relates. “It was like you could see time slow down like a coin flipping in the air slowly. Then I heard this booming voice that said:

All the anger and rage subsided under a tremendous presence of “something that I didn’t know what it was,” Ahn says.

The hairs on the back of his neck stood up.

“What would Jesus do?” another thought flashed through his head.

All of sudden, he “zipped back into reality.”

He looked up to the Heavens and uttered: “Jesus, you’re real. Show me what it’s like to be a Christian.”

When he got down off the mountain, he suddenly had the desire to go to church.

As he attended church and read scripture, he began to understand that pornography was not a good and natural thing that guys would automatically want. He began to get the revelation that the girls he was looking at weren’t objects but actually people. God asked him if he would like it if men would see his daughter naked. He didn’t have a daughter yet, but he imagined he wouldn’t like it.

Then Jesus impressed on his heart: Those are my daughters.

Ahn’s response was anything but mild. “Whoa! Dad with a shotgun!” he thought. “Run. A sudden fear.”

As he peered into the Bible, Ahn realized he wasn’t only hurting God. “I was hurting myself,” he says. “I was turning myself into a weak man by giving in to my lust, by not practicing self-control. I was becoming a weak man.”

God promised him a beautiful spouse, but he had to learn to wait, Ahn says.

He began taking steps of purity.

“Little by little, I began to get set free from pornography,” he says.

With the deliverance from pornography, Ahn also got freed from the rage that got planted in his heart the day his dad abandoned the family.

“I realized I was angry at God because that was the breaking of everything I knew,” he says. “As I realized God loved me and cared for me and had a vision and a plan for me and he had a redemption for me and was going to change my life into an amazing, positive, life-giving way, I learned patience.”

Patience began to flow from Heaven and through his heart and sprouted and flourished as a fruit of the Spirit.

In place of depression, joy now flowed. “I became like a little kid running through a plain of lilacs,” he says.

In college, Ahn studied to become a molecular biologist and today hosts the Real Life Radio Show. He is based in Orlando.

“When you experience the kingdom of God, it comes with so many benefits: life, joy, love, peace,” he says. “When I came to Christ, I discovered the peace of God. It’s something you can taste and feel.”