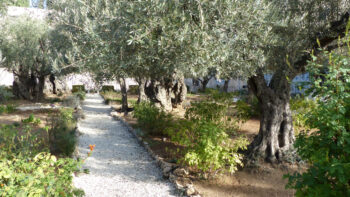 Talk of a two-state solution is back on the agenda following Israeli Prime Minister Yair Lapid’s controversial UN speech of support for a ‘peaceful’ Palestinian state.
Coming at a time of waning Arab support for the Palestinians, it is hard to grasp what is behind such thinking, apart from increased pressure from the United States along with escalating terror attacks at home.

The problem, as British journalist Melanie Phillips recently outlined, is that both Israel and the West refuse to acknowledge or understand that we are dealing with religious (i.e. spiritual) realities. The conflict is not essentially about allegedly stolen land, but ongoing hatred for the Jewish people, with fundamental Islamists engaged in a centuries-old ‘holy war’ against the supposed ‘infidel’.

This can be traced, in modern times at least, to the 1930s when Hitler formed an alliance with the Grand Mufti of Jerusalem, Haj Amin al Husseini, who pledged to annihilate every Jew in the Middle East and who remains a hero for PA chairman Mahmoud Abbas.

The truth is, Israel is legally entitled (courtesy of international treaties and the Bible) to all the land they supposedly stole, yet Western leaders insist that the only way forward is to allow a hostile state on Israel’s borders. What kind of insanity is that?

The trouble is, when politicians seek solutions, they generally fail to ask for divine wisdom. Have any of them thought to ask God for his view on the matter? For he actually has a very clear position regarding Israel’s future.

He does indeed have a solution, in fact, variously spelled out by prophets like Ezekiel and Zechariah, as secular Israeli media pundits have pointed out of late, even quoting New Testament Scriptures to highlight the important role of the Mount of Olives in restoring peace, and the glory of God, to the region. (See Ezekiel 11:22f & 43:1-7, Zechariah 12:10 & 14:4, Acts 1:11f)

One of God’s key end-time plans has been the miraculous return to their ancient land of the widely scattered Jewish people before the Messiah himself returns to reveal himself to them. But few are making plans for this great event.

When Moldova was part of Russia in the late 19th century, a Jewish merchant named Joseph Rabinowitz began helping young Jews emigrate to Israel to escape persecution. During one of his regular trips to Jerusalem, while walking on the Mount of Olives one day, he saw Yeshua (Jesus) coming towards him, saying: “I am the one whom you seek; I am the solution to your problem.”

He became convinced that Yeshua was the Messiah and decided to stop working so hard to bring Jews to Israel and instead to invest all his energy and resources on Jewish evangelism in Moldova, pioneering Messianic Judaism in the modern era. (See Four Rabbis Find Yeshua, September 28, 2022, by David Lazarus)

Not far from our home in Yorkshire, I can think of three major businesses which have seen exponential growth in recent years. But the rug is being pulled from under the feet of at least two of them as unexpected economic and other difficulties present themselves. Business projections have failed to live up to their promise. Making as much money as possible seems often to be an overriding concern rather than building up a reputation for reliability and integrity.

James, the brother of Jesus, writing to the scattered Jewish disciples of the first century, warned: “Now listen, you who say, ‘Today or tomorrow we will go to this or that city, spend a year there, carry on business and make money.’ Why, you do not even know what will happen tomorrow. What is your life? You are a mist that appears for a little while and then vanishes. Instead, you ought to say, ‘If it is the Lord’s will, we will live and do this or that.’” (James 4:13-15)

An Australian colleague of mine, who has lived and worked in Jerusalem for the past quarter-of-a-century, initially arrived in Israel with his new wife as part of a world tour, fully intending to return home, even after praying over an invitation to stay and help at Christ Church, headquarters of the Church’s Ministry among Jewish people. The couple were ready to say ‘no’, yet found themselves saying ‘yes’. For as Solomon wisely put it, “To man belongs the plans of the heart, but from the Lord comes the reply of the tongue.” (Proverbs 16:1)

Another Australian, George Palmer, turned up at the famous Melbourne Cricket Ground in 1959 armed with a homemade gun with the intention of shooting evangelist Billy Graham. He had hated God ever since losing his father when he was just seven, and was now leader of a teenage gang all armed for the kill. But George was instead overwhelmed by the Spirit of God, dedicated his life to Christ and became a Salvation Army officer serving all across Australia. All but one of his fellow gangsters were also converted that day.¹

Proverbs 19:21 says: “Many are the plans in a person’s heart, but it is the Lord’s purpose that prevails.”

As for our politicians, it’s surely time they sought direction from the author of life, who told the Moldovan merchant he was the solution to his problem. He is indeed the solution to all our problems, including the Middle East conflict. And one day soon all Israel will recognize him as he once again places his feet on the Mount of Olives.