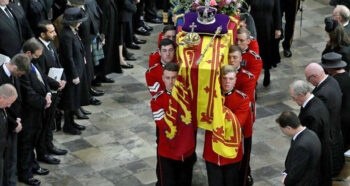 There is no question that we are living in hugely significant times which could well usher in the return to earth of the Jewish Messiah, Jesus Christ.

According to Jewish tradition, the appearance of a 100%-red cow – which is extremely rare – is a sign of the imminent arrival of Messiah.¹

While the great majority of Jews still do not accept Jesus as their long-promised Savior, the Bible is clear that when he does come, they will recognize and welcome him. And as the apostle Paul prophesied, “all Israel will be saved” (Romans 11:26).

Interestingly, the heifers came courtesy of an evangelical Christian farmer from Texas and have apparently been ruled as eligible for a biblical purification rite (Numbers 19:2) that allows service in the (presumably rebuilt) Jerusalem Temple.

Make of that what you will, but evangelical Christians around the world are also looking for and expecting the soon return of our Lord in view of the many signs spoken of by Jesus and other Bible prophets indicating a great shaking of the earth before he comes, manifesting itself in increasing violence, lawlessness and even climate chaos.
But one of the key signs, according to Jesus, was that the gospel would be preached to all the world “as a testimony to all nations” – and then the end will come. (See Matthew 24:14)

The death of Queen Elizabeth II after an amazing 70-year reign has unleashed an outpouring of love and devotion rarely, if ever, directed to a human being. Nearly half-a-million people were prepared to queue for up to 12 hours in order to pay their respects as they filed past her coffin during her lying-in-state.

At the same time, her passing has ushered in a veritable explosion of gospel dissemination on a scale I haven’t witnessed in over half-a-century of living in England. In particular, Her Majesty’s devotion to Jesus, her Savior, has been the source of much in-depth discussion and contemplation by a secular media who have recognized her faith as the secret of her success.

As Sherelle Jacobs wrote in The Daily Telegraph: “A world leader in death, as well as life, the spiritual message was one of hope that will carry global significance.”²
Her funeral and associated services beamed to billions around the globe focused chiefly on her trust in the Jewish Messiah, whom she honored and served without flinching throughout her long life.

She had planned her own funeral service, choosing her favorite hymns and readings, which emphasized the absolute uniqueness of Christ (John 14:1-7) and of his resurrection (1 Corinthians 15), followed by the raising from death of all who trust him, and of Jesus’ return in glory to make all things new (Revelation 21:1-7).

On the question of the Second Coming, I’ve no doubt that her sentiments would have matched those of Queen Victoria (her great-great grandmother), who is reputed to have expressed her wish that Jesus would return in her lifetime so that she could lay her crown at his feet. In an earlier posting, I wrongly attributed that to our late Queen, for which I apologize.

I’m sure that the gathering of 500 world leaders at Westminster Abbey was all part of God’s plan. And when Liz Truss became Prime Minister and was received by the Queen on September 6th, she was no doubt anticipating the cost-of-living crisis being at the top of her immediate agenda.

But it was the public reading of Scripture before an audience of billions that became her priority – and she did it very well!

When Jesus returns, it won’t just be faithful Christians who will welcome him back, but Jewish people will also recognize him (Zechariah 12:10, Matthew 23:39, Romans 11:26). In fact, they will mourn and weep over their former rejection of him.

But he will reply along these lines: “You intended to harm me, but God intended it for good to accomplish what is now being done, the saving of many lives.” (Genesis 50:20)

We’re in this together – Christians and Jews. There is a growing recognition of Jesus, even among Jewish scholars. Dr David Flusser, when professor of religious history at Hebrew University, said: “I do not think that many Jews would object if the Messiah – when he came – was the Jew, Jesus.”³

As we approach some of the holiest days of the Jewish calendar, particularly the Feast of Tabernacles, talk of his coming is all the more appropriate. All the autumn feasts point to his return, and with Tabernacles celebrating the way he came to live among his people in the desert, and later in the land of Israel itself, it is widely anticipated that it will be during this feast that he will place his feet on the Mount of Olives. (Zechariah 14:4, Acts 1:11)