Mom’s rare form of cancer offered a bleak 0% survival rate, but she declared to her husband – mystically – “I’ll be better by our anniversary.”

Daughter Mikhaila Peterson dismissed the proclamation as “spooky weird.” But when Mom recovered a month later on the day of her anniversary, Mikhaila “couldn’t logic my way out of that.”

“How did you get better?” she asked Mom.

“God,” was her cryptic reply.

Mikhaila is a Canadian diet and mindset podcaster who is almost more famous for being the daughter of heralded culture critic Jordan Peterson, who himself recently passed from admirer of Christian teaching to follower of Christ.

Mikhaila’s journey to Christianity shadows her dad’s, but the critical factor was her mom’s brush with death.

Mikhaila grew up learning the Biblical stories, but they were taught for their psychological significance by her psychologist father who viewed them through the lens of Carl Jung. They weren’t taught as literal events and truth.

“In the 4th grade, somebody asked me if I believed in God,” Mikhaila remembers on a Big Conversation video. “I said, ‘I don’t know.’”

Inwardly, she envied Christians. “I hoped that one day I could find some sort of support, like God,” she says. “I heard Christians talking about it and it was like that sounds fantastic, but I don’t have that.”

Ironically, consuming psychedelic drugs in her youth made her open to the possibility of there being a deity.

“I took a lot of psychedelics, and I do think the psychedelics opened my mind to the possibility that there was something there I couldn’t see,” she says. “I think that had a fairly large role to play.”

Dad, who was a cultural phenomenon, came to Christ and stopped viewing the Biblical narrative only as an expression of humanity’s deep-seated needs and realized they are also true stories. Mikhaela, who always admired her dad, took note.

But it was her mother’s rare cancer that led her towards faith.

“She was unbelievably sick. She was movie sick. She got this rare cancer that nobody gets and there were no studies on it and the death rate was 100%,” Mikhaila relates. “It was a cancer that nothing helps and it kills you right away.

“It tore my family apart because it was so sudden.”

Only a Catholic woman who visited her in the hospital to pray with her offered hope. 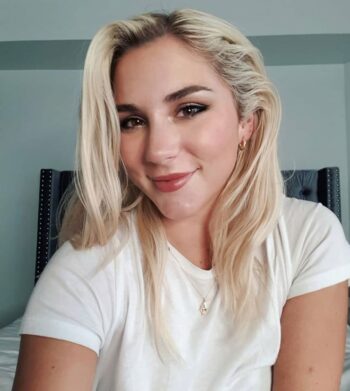 “A lady started visiting her in the hospital and they were praying together,” Mikhaila says. “My mom’s demeanor changed. She just let go. She let go of the control she was trying to have over the cancer.”

It was July and she was being tube-fed in the hospital. Tammy’s faith took over.

“I’ll be better by our anniversary,” she declared. Tammy and Jordan’s anniversary was next month.

Such raving, baseless optimism must be due to the morphine, Mikhaila figured.

Then Mom, a month later, got better. The 100% fatality rate of her super rare form of cancer changed to something less than 100%. No doctor could account for the recovery.

“On their anniversary she recovered and nobody understood why,” Mikhaila says.

Mikhaila talked over the strange anniversary recovery date. “That’s a weird day and you said that was going to happen a month ago,” Mikhaila said to Mom. “How is that possible?”

She was going through a painful divorce, and other things in her life were not good.

She opened up to a friend, who encouraged her to pray.

“Just ask God to reveal himself to you,” the friend told her.

She did. Things turned around in her life.

“There were like four parts of my life that were heading in a bad direction,” she relates. “They all kind of turned to head in a better direction.”

She took this to be the proof she was seeking from God. She now identifies as a Christian.

“I’m mostly just reading the Bible a lot, multiple times and trying to understand as much as I can,” she says.