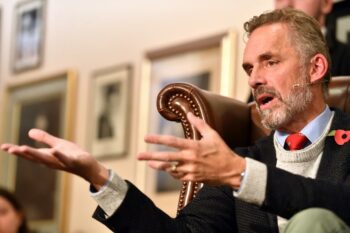 Like most intelligentsia, Jordan Peterson started as an avowed atheist.

He is no longer an atheist. He leans strongly towards Christianity, which his wife has largely embraced after a brush with cancer.

But Jordan Peterson shies away from outright and unreserved acceptance of Christianity, mainly because he feels the implications are overwhelming in terms of the code of conduct expected.

“Who would have the audacity to claim that they believed in God if they examined the way they lived?” he says on a Pursuit of Meaning YouTube video. “People have asked me if I believe in God. I’ve answered in various ways: ‘No, but I’m afraid he probably exists.’ While I try to act like I believe, I never claim that I manage it.” 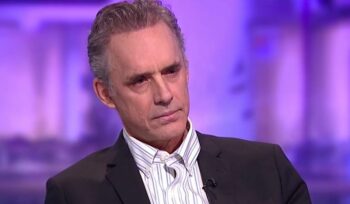 A behavioral psychologist and university professor from Canada, Peterson has rocketed to herodom among Christian pundits because, as a cultural icon, he opposed gender confusion and the cancel culture sweeping politics, the media and academia. He doesn’t like the attempts to force people to not think for themselves.

His best-selling 12 Rules for Life affirms traditional masculinity, which current culture calls “toxic,” and offers itself as an antidote to the moral chaos heralded widely now in Western nations. He’s pronounced himself in favor of Biblical morality.

With this shift towards Christian values and Christian cultural ideas, the loudest liberals “cast him as a far-right boogeyman riding the wave of a misogynistic backlash,” according to the Los Angeles Times, but in reality, he’s not. He has all kinds of ideas, and he’s unafraid to share them.

Peterson has even presented a series of lectures on the bible. But don’t expect an inspirational devotion like your pastor’s; Peterson legitimizes the bible but examines it through a Jungian psychological optic.

He offers insight as to why God didn’t punish Cain more severely. He explains that skeptics can’t easily shrug off the resurrection with the claim that it’s simply a forged copy of various resurrection myths from different cultures for one simple fact: Jesus was a real historical person while other resurrection myths only portray mythological persons.

“What you have in the figure of Christ is an actual person who actually lived, plus a myth, and, in some sense, Christ is the union of those two things,” he says. “The problem is I probably believe that, but I’m amazed at my own belief and I don’t understand it.”

Neither Peterson nor his wife, Tammy, attends church – though Tammy is participating in works of charity with a group of church-going Christians.

“There’s also something about going to where a bunch of other people are to reaffirm your commitment to the good that you’re all aiming at that’s got some power in it,” he adds. “I think it’s dangerous to forgo (church attendance). Even if you’re cynical about church, it’s certainly the case that communal church going in the 1950s provided the average person at least an hour a week where they were contemplating, no matter how poorly, the purpose of ethics in life and the idea of a higher purpose and a higher meaning in life.

”I really do think it’s a catastrophe that we’ve lost” the church attendance custom, Peterson concludes. “Because we don’t have an ethical center that holds our community together, and the consequence of that is that we are fragmenting quite badly.”

In postmodern Western nations, liberal elites have derided Christian morality from the 1960s onward, refusing to accept the bible’s morality and shushing Christians who try to promote it. Morals, they said, are subjective and individual.

After shutting down the notion of public morality, the liberals began to impose their own set of morals on everybody: Don’t use the wrong pronouns, for example.

Peterson despairs of the downward drift of society. We should not shy away from teaching Biblical morality to kids, he says.

“We’re not very good at teaching young people, ‘You shouldn’t do that,’” he says. “You tell people how to avoid the road to Hell. You don’t do that by shaking your finger at them because you’re a moral authority. You do that because you don’t want them to burn. It’s the love that helps people avoid the fire.”

Peterson credits his wife with keeping him humble. Tammy was a masseuse but really flowered as a foster parent, providing needed housing and love to dozens of children from orphanages. Tammy contracted a rare kidney cancer in 2019. The couple searched for the best treatment from hospital to hospital, far and wide.

Through the ordeal, Peterson began taking the anti-anxiety medication clonazepam and became addicted. He checked into a rehab in New York to wean himself off the chemical dependency, according to who.com.au.

“Tammy has always taken the idea of truth very seriously,” Peterson says. “Her recent brush with death has deepened her religious sense and impelled her to a life that’s more consciously focused on service to others. I’m watching what she’s doing and listening to her and watching her practical application of her faith. That affects me as everything she does affects me because I watch what she does and take it very seriously.”

Peterson declared his love for Tammy when he was 11 in grade school in Alberta, Canada. Their natural-born kids, Mikhaila and son Julian, have made them grandparents.

From 1993 to 1998, Peterson taught and researched at Harvard University, becoming an associate professor. He studied aggression arising from drug and alcohol abuse and became a campus legend for his engaging lectures.

“I remember students crying on the last day of class because they wouldn’t get to hear him anymore,” says Shelley Carson, now a professor at Harvard. Peterson’s lectures had “something akin to a cult following.” 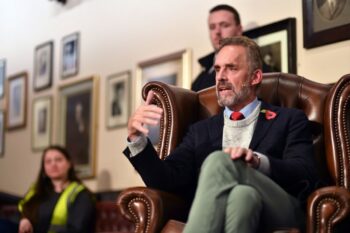 Peterson moved on to become a full professor at the University of Toronto while maintaining a clinical practice seeing 20 patients a week.

Peterson has long criticized political correctness in Western universities, which he says is guided only by post-modernism and neo-Marxism. When the university enforces correct thinking, it stymies thinking, he says.

He opposed the feminizing of men, calling it a crisis of masculinity. “If men are pushed too hard to feminize, they will become more and more interested in harsh, fascist political ideology,” he says in the New Yorker.

In 2016, Peterson attained notoriety by opposing Canada’s Bill C-16, amending the Canadian Human Rights Act, to include LGBTQ as a protected group against hate crime and genocide incitement.

Peterson argued the law would criminalize free speech if you didn’t use a person’s preferred pronouns. He likened “compelled speech” to “the Marxist doctrines that killed at least 100 million people in the 20th century,” he wrote in Op-Ed piece in the National Post.

Again in 2016, a transgendered videographer ambushed Peterson at a campus protest, accusing him of sparking Nazi violence against LGBTQ people. While Peterson condemned the Nazis and their violence, he refused to call the videographer by his/her preferred pronouns.

“I don’t believe that using your pronouns is going to do you any good in the long run,” an equanimous Peterson responded to the camera.

Perhaps the transgender activist thought to expose and disgrace Peterson. Instead, the video racked up millions of views and garnered millions of people who rallied to his support and made him into an icon of conservatism. Ironically, the video meant to be his downfall was his launching pad to international fame.

The University of Toronto sent Peterson two letters admonishing him to use correct pronouns, and while little more than dickering and funding denials came of it, ultimately Peterson resigned the university in 2021 saying the climate of political correctness was killing the environment of thought.

And so the mild-mannered independent-spirited professor of psychology continues to be a firebrand and a philosopher to inch people toward Christ and biblical ethics.