When reading how Jesus told his disciples to proclaim the gospel to the ends of the earth, a young lady from north London took him at his word. But she could never have imagined what an amazing adventure it would be. And she is still there after 24 years!

Kerry Stillman found herself in the heart of sub-Saharan Africa, using her skills as a physiotherapist to bring healing and hope to a people as yet largely unreached with the Christian message.

Based at a Christian hospital in north Cameroon, she became part of a multi-national (and non-denominational) team offering medical – and sometimes miraculous – solutions to the Fulbe (also known as Fulani) tribe.

As if the harsh, hot and dusty conditions – along with the difficulties of language – are not challenging enough, the work has also been hampered by the incursion of terrorist activity in the area.

A gentle, gracious and unhurried people, the Fulbe are mostly Muslim. But many are now following Jesus. And it’s not always the case that they first hear about him through the missionaries.

Extended family groups, even across the border into Chad, have come together after having dreams of Jesus, asking Kerry and her colleagues to teach them more about the faith.

As a result, a young man called Mohammed, whom Kerry introduced to Jesus four years ago, has since visited several of these groups feeding their hunger to know more about this wonderful person who appeared to them in their sleep.

However, some of the converts have paid a great price for their commitment to Christ, with family often disowning them and, in one case, a Fulbe believer lost his 11-year-old son after he was brutally attacked for his father’s faith.

Many have come to faith as a direct result of their stay at the hospital, where they are treated for TB, malaria and sometimes horrible injuries through road accidents, often necessitating long stays with family members camping on the compound keeping vigil over their loved one’s progress.

The loving care shown by staff both to patients and their families has made a deep impact on the community. One of the regular commitments of hospital workers there has involved a ‘prayer round’ when every patient is prayed for.

On one occasion, a member of staff dutifully prayed for all those in a children’s ward who were suffering terribly with malaria and not expected to survive the night. He was rather exhausted and disheartened by the time he had finished, but there were smiles all round next day – both from the children and their mothers – as God had clearly worked a miracle.

“This act of simply offering to pray for a sick person has often led to many deeper conversations and opened the door for questions of faith to be asked,” Kerry explains in her book Blood, Sweat and Jesus (Authentic Media). 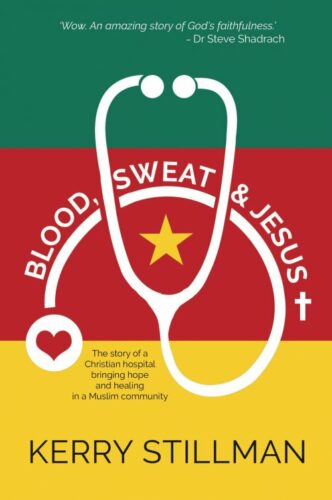 One man, a teacher of the Qur’an, was so struck by the improvement he felt as a result of the prayer that, on his return home, he started to teach his students from the Gospel of Matthew he was given.

A businesswoman who developed cancer symptoms but left it too late for effective surgery, told of a dream in which she described seeing a dark man who did not bring her peace, but then saw a bright, shining man who came and sat with her, and did bring her peace. She wondered who they were.

Kerry wrote: “It has been our experience over the years that many Muslims are having dreams in which they meet a man like this who is bright and shining. Often, they can’t see his facial features, but his presence and words bring comfort, peace, strength and life; the conclusion of most is that this is Jesus Christ.”

One young woman, Samira, appeared to be at death’s door suffering from TB as well as being HIV positive but, as her relationship with Jesus developed, she made an amazing recovery, enabling her to watch her children grow up, and even to see her grandchildren.

A fisherman became paralyzed and unable to walk after being struck with TB in the spine. Moved to pray for his complete recovery, a hospital worker called on him to ‘rise up and walk’ in the way Jesus’ disciples had done for a cripple as recorded in the Bible (Acts chapter 3). It didn’t happen there and then, to the great disappointment of all concerned, but he returned to the hospital a couple of years later to share the joyful news that he no longer needed the tricycle he was given – he was now able to walk!

One of the hugely effective tools used by staff has been in showing the Jesus film, based on Luke’s Gospel, which has opened many eyes to the truth.

Sometimes the severity of a patient’s condition is beyond the capacity of the hospital to deal with, and funds are raised through Christian supporters to send them elsewhere for expert care – usually to the UK or South Africa.

Kerry herself had to be flown back to England for emergency treatment when she nearly died of a virus that caused temporary paralysis, though in her case she was covered by medical insurance.

Meanwhile, a pregnant woman’s serious pelvic condition looked like being a dangerous impediment to giving birth but, following prayer for a miracle, the baby was delivered normally!

Clearly, Kerry and her colleagues have a great love for these people as they sensitively, but intentionally, point their patients to the ultimate healer. If you are not a believer and want to know what true Christianity is about, then read this book. If you are already a believer, it will challenge and inspire you to greater heights of faith and adventure.

To learn more about the book, go here