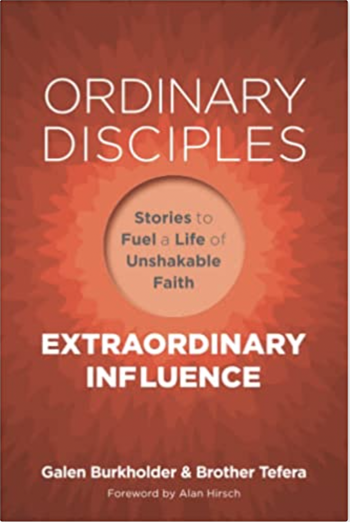 Kofi, the pastor was immediately suspicious.

The imam on the phone, Ahmed, said he wanted to meet with a pastor because he had an encounter with Jesus. “He had questions, things he didn’t understand. Would Kofi meet with him and answer his questions about Christianity and Jesus?” writes Galen Burkholder, in his new book, Ordinary Disciples, co-authored with Brother Tefera.

Pastor Kofi suspected he was being set up for a violent attack. “He had heard about pastors lured into dangerous situations by people claiming to want to know more,” notes Burkholder. Pastors who went to such meetings were often beaten, imprisoned, or even killed.

In this situation, the still small voice of the Spirit encouraged Pastor Kofi to meet with the imam, so he traveled to the designated location at the appointed time they discussed.

“Kofi looked around nervously. Then he saw the silhouette of a man in long robes, the imam’s traditional clerical garb, walking down the alley toward him…Imam Ahmed greeted Pastor Kofi by name.”

The imam thanked the pastor for meeting with him, saying that two other pastors refused to meet. Then he began to relate a story that sounded like it was out of the Book of Acts.

It seems Imam Ahmed and a small group of fellow imams, who had been stirring up violence against Christians, were walking from one town to another.

“Suddenly a bright light shone down from heaven, and Ahmed fell to his knees. He heard a voice from heaven that said, ‘Stop persecuting my people.’ Then the voice gave him a verse from the Qur’an, and the light faded. The others saw the light, but only Ahmed heard a voice he could understand.”

Imam Ahmed told the pastor he believed he met Isa al-Masih on the road – the name for Jesus in the Qur’an.

When Imam Ahmed returned home, he looked at the verse given to him on the road, which said, “Honor the People of the Book.”

The imam agreed to meet with Pastor Kofi at a secret location for one week of intensive training about what it means to be a Christian, involving much prayer, study of the Bible, and deliverance.

By the end of the week, the imam had surrendered his life to Jesus Christ as his personal Savior and Lord.

When he returned to the mosque, he was a new creature in Christ. He began to teach from the Ingil (the name for the Gospels in the Qur’an), which the Qur’an instructs faithful Muslims to read.

“Ahmed led one family after another into relationship with Jesus Christ!” Burkholder exults.

While the other imams who had been with Ahmed on the road initially thought he was crazy, one by one they too came to faith in Christ. “Ahmed began to secretly attend a gathering of pastors with the churches that Kofi represented. One day Ahmed came to the pastors’ meeting, beaming from ear to ear.

“Well, it’s finally happened,” he said. “Everyone in my mosque is now a baptized follower of Jesus Christ.”

The same move of the Spirit was happening in the mosques of the other imams. “One day, all five men came to the pastors’ meeting. They explained that their mosques were full of disciples of Jesus Christ. They were teaching from the Ingil and breaking bread together as they celebrated the Lord’s Supper.”

One senior pastor invited other pastors to come and see the wonderful work of the Lord, transforming these traditional mosques into “Jesus mosques.”

Galen Burkholder founded Global Disciples in 1996 after 12 years directing an international discipleship and mission training program. Galen and his wife, Marie, live in Landisville, Pennsylvania, and have three adult married children and six grandchildren. Brother Tefera grew up in Ethiopia, where he embraced atheism and chaired the Young Communist Party in high school, before he came to Christ at university. While teaching high school math in northern Ethiopia, he helped to plant 27 new fellowships of believers in 11 years and was imprisoned for his faith three times. To find out more about their book, go here