Louie Cortese started racing motocross when he was only three-years-old. After a season of great financial blessing for his family, it was all wiped away in the Great Recession, and they were forced to re-examine the things they held dear.

Cortese’s family lived in Coral Springs, Florida when he started racing. After riding at one of the local tracks for a while, his parents built their own track. They bought 20 acres in Groveland, Florida, where they created a supercross and motocross track, along with a large home and a warehouse to hold all their possessions.

“I was blessed with the opportunity to be homeschooled and spent pretty much every single day with my dad. We were going to the track and riding at home every day,” Cortese told God Reports.

Cortese’s father had started an Italian restaurant and the family began to attend a non-denominational church in the same complex.

“That’s when I was first introduced to the stories of the Bible,” he recalls.

Due to the success of the restaurant, his family was blessed financially. “We had every worldly toy that you could ever think of. When I was three years old, my dad put me on a dirt bike. And he ended up having this bright idea that we should pursue motocross.”

At the family restaurant, Louie did homework, cut pepperonis in the pizza shop, and stretched dough with his grandmother.

The restaurant business was in the family’s DNA. Louie’s grandparents — first generation Italian immigrants —  started Avenue Pizza in Buffalo, New York, which eventually grew to a chain of 14 restaurants.

In 2008 the economy crashed and it had a devastating impact on many businesses – especially restaurants.  “My family lost everything. In one year’s time, we lost our home; we lost our business. My dad was diagnosed with cancer; we lost my grandfather to leukemia. And I was in the hospital with one of the worst injuries of my entire motocross career.”

“I was in the hospital fighting for my life while my dad was in and out of the hospital due to cancer,” he recounts.

The twin crises wearied his young mind. “I felt a lot of pressure on myself. I thought if I rode a bit better, and won that race, maybe this wouldn’t have happened. I had my first suicidal thought at a very young age.”

The enemy whispered in his ear during sleepless nights.  “There was a tormenting, condemning voice that came to me in the middle of the night, saying: ‘it’s all your fault. You should end your life right now.’

Cortese cried in his room when he heard his parents argue. “I watched my family crumble, thinking it’s all my fault.”

In Cortese’s accident, he broke every rib on one side and ruptured his spleen. One of the broken ribs actually went through his spleen, and doctors wanted to remove it.

A splenectomy (removal of the spleen) could have resulted in a diminished immune response, along with an increased probability for pneumonia and heart disease.

On the night before the surgery, his mother, whom he describes as a prayer warrior, along with another friend, prayed fervently for healing.

The next morning something remarkable happened. The surgeon shocked them when he said it appeared as if the spleen had mysteriously been sewed back together. There was no bleeding, and the surgery would not be necessary.

He knew God had answered their prayers and delivered a miraculous healing!

In the midst of the financial hardship, an unexpected outcome emerged. Forced to downsize their home from 3000 square feet to 800 square feet, their familial bonds deepened. “We all got really close together,” he recounts. “And I watched my parents get happier and their marriage improved.”

“To this day, my parents are in that same exact little house. And they’re still slowly but surely climbing up and out of a hole.”

The family continued to pursue their interest in motocross. “My dad bought a $500 truck with no floorboards and it had gas fumes coming into it. We were still going to the track, making it happen, and using quarters for gas, using quarters to get a McDonald’s hamburger.

“We called ourselves Christians, but we were never riding motocross for the Lord. God wasn’t the center of that. But God is so faithful that he taught us so much through that time. I was always a prayer warrior and one thing that I noticed was that my mother’s faith was very, very, real. I think my faith and my dad and my brother’s faith, came strictly from my mom just praying for us every single day, and dedicating so much time and effort to pour into our lives.”

After graduating from high school, Cortese began working to help support his family, but he didn’t really like the job.

One day he was in the supermarket walking down the aisle, reviewing his life, and he got emotional. “I looked at my life and I just broke down. I said, ‘God, if you’re even real, I don’t know, I don’t understand these spiritual things, I pray that you just open the door for my life. And as long as you protect my family, I’ll dedicate my life to you. And I’ll go wherever you want me to go.’

The next day, Cortese pulled a muscle in his back and went to a walk-in medical center seeking relief. “I was sitting in the clinic with my head down feeling defeated and I got an email from Monster Energy. It was a contract to join their Athlete Program.”

God had answered his prayer with remarkable timeliness. To Cortese, it was the biggest deal in the world – and it came after he opened the door of his heart to God. 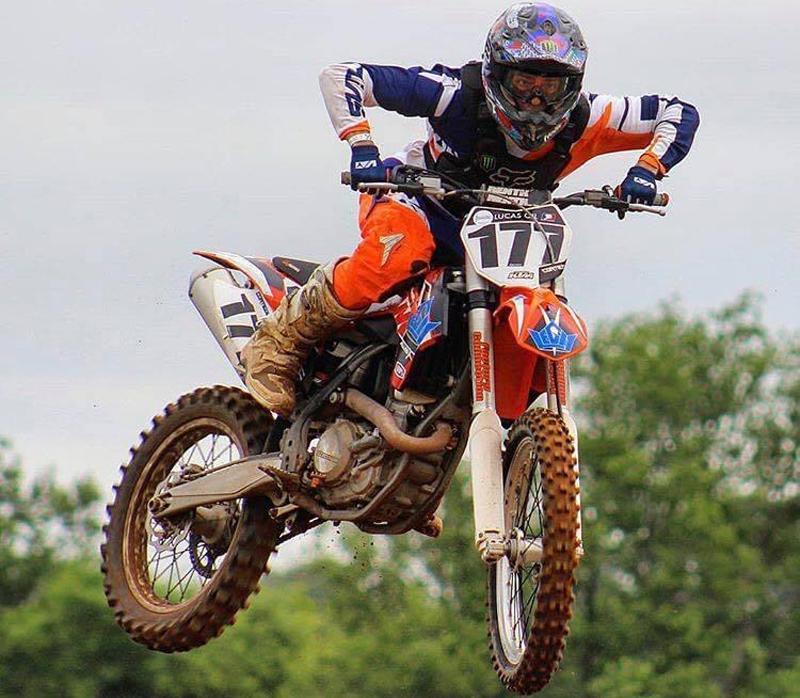 “The door to the heart opens from the inside,” Cortese believes. “And God is the one who knocks. And that was the first time I stepped out and said, ‘Lord, I’m desperate, I’m at rock bottom, I don’t know if you’re there, but I need to know that you are.’”

After surrendering his heart to Jesus Christ, receiving new life in Christ — and a new contract — Cortese wanted to tell the world about his newfound faith. “I put God first on my Instagram. I wanted people to know I’m a Christian now, because God has revealed himself to me.”

Two weeks later he received a direct message from John Andrus, who runs a ministry team called Stunt Dudes, inviting Cortese to perform in South Carolina. “They go all over the world to spread the gospel by using the tools of BMX. I had no idea that that would be the first time that I would get the opportunity to do Christian BMX shows. That one message forever changed the course of my life.”

“I am so grateful and so blessed that my life changed, just like a light switch – immediate — from that time I recognized the Lord, I recognized something I couldn’t explain. And all of a sudden, the Lord just grabbed ahold of me and said, ‘This is what you’re going to do. And this is how you’re going to do it.’

“When I tell about my faith. I don’t say I’m a Christian or an evangelist. I just say I’m a storyteller for Christ. Because that’s what I am. My life story is to match the testimony of Jesus and I get the opportunity to use what God has done in my life as a tool to share the gospel.

“And I pray that the Lord will be able to use me in in ways that glorify Him. And I tell the Lord every day, use me right where I am. Wherever I am, just use me right now. And surely, He does.”