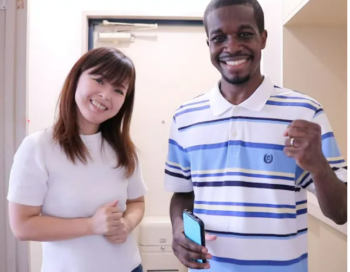 Blacks aren’t generally well accepted in Japan. Even Japan’s 2015 Miss Universe candidate Ariana Miyamoto, being half black, was widely rejected on social media as not being truly Japanese.

So how does Marcel Jonte Gadsden – and a handful of other black pastors – lead churches and evangelize in Japan?

“No matter what you do, no matter how you treat me, I respond with a deeper love, an unconditional love, agape love,” Marcel says on The Black Experience Japan YouTube channel. “The Bible tells us to love our enemies. How can you love your enemy? You can’t do it. That’s why the L of love is written from the top down. You must receive love vertically from the Father, down to you and then you can give it out.”

Marcel arrived in Japan as a military brat in 1999.

“I thought coming here there’d be samurais everywhere with swords,” he says. “I was scared to come to Japan. I thought we’d be the only black people in Japan. All I knew was Ramen noodles and samurais.”

When he got out among the people, he was smitten with compassion – so many hordes without hope, without Jesus.

“If what I believe is true about God, what is the hope for these people?” Marcel remembers. “The passion began to rise.”

Motivated to reach the people, Marcel threw himself into learning Japanese and when he had memorized some verses, went out as an adolescent to street-preach in Japanese in the Shinjuku neighborhood.

Japan has virtually no context for understanding street preachers. While there are street performers, they make a poor reference point. Some stared at him as if he were crazy, others ignored him.

While the initial response wasn’t exactly warm, Marcel was warmed by the fires of the love of God.

“Some people were listening and others were like who is this guy?” he remembers. “I began to learn about Japanese people and how they’re not expressive like we are.”

He took a job at 7Eleven to immerse himself in the culture and get to know the people. When he started a church in his living room, many of his first visitors had met him at 7Eleven. 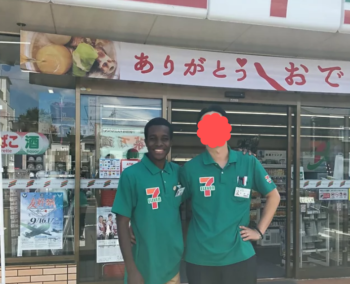 “It was a training ground. I learned so much. It turned a lot of heads when they saw me at the counter. To see the reactions in people’s faces, they look and look again like, he works here?”

When Marcel met and married a Japanese girl from church, he had to overcome the resistance of his father-in-law, who shared the typical entrenched racism of Japan. Every day his future father-in-law would drop his girlfriend off at church, he would pop up to the car, open the door for Chiaki Gadsden and warmly greet her dad.

“I think he had this image of me being a gangster and trying to steal his daughter,” Marcel relates. “He totally ignored me. And this continued until finally one day, he slightly looked like he slightly acknowledged me. He gave an inch of a nod. I was really convinced that love could destroy his prejudice.”

After Marcel and Chiaki were married, the formation of a relationship with his father-in-law began over some lost keys. 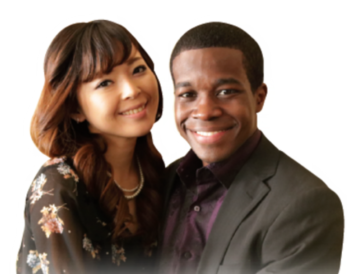 The interracial couple biked over to the in-laws for shogatsu, a family holiday at the beginning of the year. Marcel accidentally dropped his bike key through the grill into the street drain for the sewer. Chiaki knocked on the door and her father answered.

“By the way, Marcel is here,” she said. “Do you think you can help him retrieve his keys? He dropped them.”

The Japanese are always very helpful. So the man who didn’t go their wedding, grudgingly went out and tried to fish Marcel’s keys out of the sewer. As they struggled to get the grate off and with a coat hangar fish them out, the two talked man to man. A bond began.

“The key was the key,” Marcel says. Now the two share KFC all the time.

Since overcoming discrimination with his father-in-law, Marcel has continued to offer people “raw love” to win them to Christ. The couple now has a building in the Hakushima neighborhood of Tokyo, and they have a music ministry and a ministry to the homeless.

A paltry 1% of the Japanese population identifies as being Christian.

The rest of the population has a lively aversion not just to Christianity but to almost any religion. The most recent anti-religious sentiment stems partly from the Aum Shinrikyo doomsday cult that killed 14 people and injured 50 others in coordinated attacks in Tokyo’s trains in 2015. Almost any religion is guilty by association.

“Generally speaking, Japan has this phobia of religion, anything God related,” Marcel says.

Surprisingly, there’s an entry point for the gospel in Japan, gospel music. Marcel does the music.

Does it seem ironic that the Japanese are averse to the gospel and open to gospel music?

By Christian mission groups, Japan is viewed as a spiritual wasteland, but Marcel is optimistic about revival in the needy nation.

Marcel’s heart beats for the most needy, Japan’s homeless population. Frequently, his church heads out to the woods to find homeless people. They invite them to stay in an apartment, give them food and a shower and share the gospel with them. Unconditional love conquers all.

At one point, Marcel worked as a preschool teacher. While on a field trip, he was surprised when a little girl, since little kids have no filters, asked: “Mr. MJ, why are you black?”

Marcel pointed out the beautiful scenery they were enjoying.

“You see those flowers over there? You see how they’re all different colors? Imagine if all the flowers in the world were all the same color, flowers would be boring, right?” he told the tyke. “God made all the flowers different for a reason.”

The simple, sincere question from a curious kid led Marcel to ponder more on the subject. The result was a book, The Reason Why I’m Black, available on Amazon.

“We are different because we are challenged to love,” Marcel says. “Love means to accept, to accept how you are. It’s a challenge to love people who are different than us. Love is a choice, it’s action, it’s relationship and it’s expensive.”