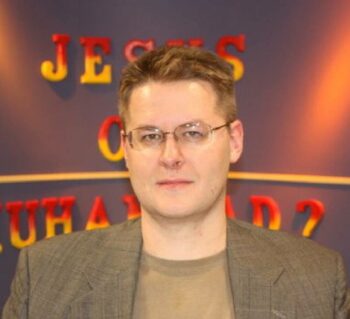 Wanting to “unleash” himself from society’s norms, David Wood decided to flout rules in the biggest and worst way, by murdering someone. Not just anyone. He developed a plan to murder his own father.

“Some people don’t want to live like cattle,” David explains on his Acts 17 Apologetics YouTube channel. “Some people don’t want to follow this pattern that we are all expected to mindlessly follow. Some would rather bash a man’s head in, or shoot up a theater, or walk down their school hallway stabbing people. Why shouldn’t they? Because it’s wrong? Because of your grandma? Or do people have intrinsic value? Human beings were (to me) nothing but machines for propagating DNA.”

From childhood, David had psychopathic tendencies. He was further influenced by an atheistic moral vacuum and the destructive philosophy of nihilism, a poisonous mixture that influenced the monster he became.

As a boy, when his dog died, his mother cried, but he felt nothing.

Crying isn’t going to change the fact that it’s dead so why are you crying? he thought.

Years later, when his friend died, David again felt nothing. When his mother got beaten up by a boyfriend, he felt nothing.

“I don’t remember ever not living with violence in the family,” David says on Premier Christianity. “My mum was habitually with very abusive boyfriends. One of my earliest memories was hearing a lot of screaming and walking into the kitchen and seeing blood everywhere, and my mum saying: ‘It’s ketchup, go back to bed.’”

David became a habitual rules breaker. He broke into homes, ran from police, and trampled people’s gardens. For David, morality was, at best, a “useful fiction.”

“My atheist worldview was throughout the universe or through time, we’re collections of cells,” he says. “You could kill 1,000 people, or you could spend your entire life helping people. It doesn’t make any real difference. You might as well just do whatever you feel like doing with the time you’ve got.

With a nihilist worldview, he adopted the Nietzschean self-concept of an ubermensch. He was mad at society for trying to “brainwash” him with its rules. The right thing to do, he believed, was to throw off all restraint and prove his superiority. He was “Humanity 2.0.”

There’s nothing wrong with me. It’s everyone else who has a problem. I’m the only smart, sane one, he thought.

David started studying how to build bombs but ultimately rejected mass murder because it was so prosaic.

“Anyone can blow up a bunch of random people, you don’t know them,” he says, “If you’re sick of life dangling at the end of society’s puppy strings, the killing has to start much closer to home. My dad was the only relative I had within a few hundred miles and so he obviously needed to die, and I had a ball-peen hammer that would do the trick.”

Later diagnosed with antisocial personality disorder, David felt no remorse, no guilt, no sense of right and wrong. His determination to live “unleashed” knew no bounds.

On the night he planned to murder his father, 18-year-old David sat trying to think of one thing wrong his dad had done to him. He couldn’t think of a thing. He attacked him anyway with the hammer. His goal was to kill him, but he failed.

“I underestimated the amount of damage a human head could endure, crushed skulls could apparently be pieced back together by doctors,” he says. “My dad had brain damage, but he survived the attack.”

David was arrested and sentenced to 10 years in prison for “malicious wounding” under New York’s law.

In jail, he met a Christian named Randy whom he mocked. Randy wouldn’t back down easily. In fact, Randy engaged in a spirited debate with David. Surprisingly, they became friends. To compose arguments to refute Christianity, David began to read the Bible.

As a repentant prisoner, Randy would frequently fast. Feeling compelled to show himself superior, David took up fasting, wanting to outdo Randy.

On the 11th day of a 42-day fast to beat Randy’s 40-day fast, David fell and hit his head. Prison staff, knowing David’s mental history, thought he was trying to starve himself to death, and they moved him to monitored isolation. He was blacking out and developing shingles from the nutrient deprivation.

But a funny thing happened in the lonely cell where he read the Bible voraciously to debate Randy.

“I hadn’t eaten for days, and I read Jesus saying, ‘I am the Bread of Life. He who comes to me will never go hungry,’” he remembers. “I was obsessed with liberating myself from a society that has me trapped in a 6-and-a-half by eight-foot cell, and I read, ‘If the Son sets you free, you will be free indeed.’

The power of the Word confounded him. “It’s kind of creepy when a book talks to you,” he says.

Three ideas seized his mind and destabilized his worldview: First, intelligent design. “The basic living cell is unimaginably more complicated than some bricks stacked on a wall” that didn’t get there by themselves, he explains.

Secondly, it didn’t make sense that the disciples all went willingly to their martyrdom to defend a lie, if self-promotion were the motive for inventing the resurrection story.

“Third, I started worrying that Jesus might actually be better than me,” he says. “I had two beliefs that just didn’t go together. On the one hand, I believed that human beings were just meaningless lumps of cells and everything was pointless. At the same time, I believed I was the best, most important person in the entire world.

“How is it possible to be the ‘best, most important’ ‘worthless lump of cells?’” he asked.

For there to be a best person, there had to be a standard of good established by an outside source, like God.

If so, he realized, he wasn’t the best; Jesus was.

“In a moment of clarity, it just all hit me: I’m a guy who once choked my friend until bloody foam came out of his mouth, I hit him with a shovel because he disagreed with me,” he surmised. “What sense did it make to think I was the best?”

As he came to grips with the truth of his life in that isolation cell, David asked: “Who had the ability to take psychologically, emotionally and spiritually shattered people and give them new life? We get a list of one.”

David dropped to his knees in that cell in 1996. Following a prayer found in a prepared prison Bible study, the psychopath finally acknowledged he was a sinner who needed a Savior.

“If you can do anything with me, you’re welcome to it,” he prayed. “When I sat up from that prayer, the entire world looked different, like everything was a different color. For the first time in a lot of years, I didn’t want to hurt anyone.”

He could finally see his rejection of God had twisted the image of God in his understanding.

“For years I was willing to sacrifice everything for a kind of freedom, a freedom from external control. It’s a false freedom that we use to degrade and destroy ourselves, tarnishing the image of God so that we won’t be reminding of what we are and what responsibilities we share.”

The lifetime brawl against God was over. For the first time, he felt peace – a restful peace that has lasted to this day.

After five years behind bars, David was released in 2000. He enrolled in Old Dominion University, where he met and married Marie and made friends with Nabeel Qureshi, whom he brought to Jesus after lengthy debates. His exposure to winning this Muslim led him into the apologetics ministry he has today, a Christian reaching out to Muslims with the unabashed truth about Islam.

His Acts 17 Apologetics channel goes where other ministries fear to tread. It accuses the prophet Mohammad of being a charlatan and his religion a sham. Such content could elicit a retaliatory response, but while David has grown past most of his lack of empathy, he has not lost any of his former fearlessness.

David, now 46, exposes the excesses of modern Islam, the hypocrisy of the Muslim apologists who try to make Islam appealing to modern audiences via YouTube. He debates with prominent proponents of Islam.

He and Marie have five kids, two of whom suffer from centronuclear myopathy, a genetic disorder that interferes with muscular growth. Marie was agnostic when she met David. David reconciled with his father after prison.

David has a doctorate in philosophy from Fordham University. His polemics have been criticized by those who attempt to win Muslims with a softer sell. But his brash style has, apparently, been very effective, judging from the comments in his videos in which countless souls credit him with giving them the courage to renounce Islam and become followers of Christ.

“Islam spread by the force of the sword and will end by the Internet,” one comment says