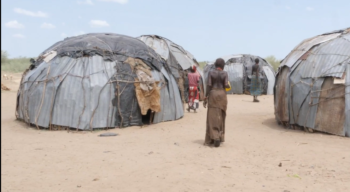 A Daasanach warrior chief named John was outraged that the Roman centurions were killing Jesus on screen in his Ethiopian village, according to a Timothy Initiative Vimeo video.

“I couldn’t believe that while Jesus was being tortured, my people sat idle,” John recalled. “I threw a stone at the soldiers and even ran behind the screen with my knife drawn.”

Some remote people groups who still live out of touch with civilization and technology don’t immediately discern between the acting in the Jesus Film and reality. So John attempted to engage the Roman soldiers to defend “an innocent man.”

Of course, John didn’t find anything behind the screen. He had never seen a movie. When he understood that the film’s action scenes were only on the screen, he took his seat on the ground and watched with horror and anguish as the Romans crucified Jesus.

While John found no one behind the screen that day, he did find Jesus. A member of the team that projected the film led him in a sinner’s prayer and began to disciple him.

Today John is no longer a violent pastoral shepherd with an AK-47 slung over his shoulder, raiding and stealing livestock and defending against raids from rival clans.

Today his main weapon is the Bible. Since his conversion five years ago, he has preached and planted churches in dozens of unreached tribal villages, training and equipping pastors everywhere he goes.

And the feared semi-nomadic Daasanach have largely abandoned their warrior ways. They’re leaving behind their pagan gods and superstitious customs, such as burying protector bones taken from the dead bodies of their rivals in front of their huts.

They are becoming an evangelistic force for Africa. Where once the Turkana region was a no-go zone, today it is a launching pad for missionary outreach.

Luigi Conder studies at the Lighthouse Christian Academy near Westchester in the Los Angeles area.