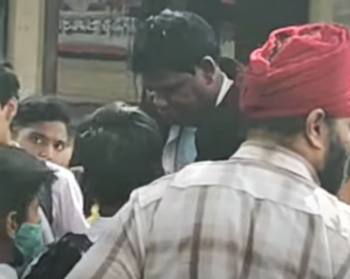 at a busy intersection and beat him before hundreds of people, but police have yet to make arrests, sources said.

Accusing Pastor Kelom Kalyan Tete of forcible conversion as they beat him, Hindu extremists on Feb. 25 then abducted the bleeding pastor, bound his hands and tied him to an iron rod that divides a road into two at Fatehpur Beri Chowk crossroad in South Delhi, Pastor Tete said.

Though the attack took place in daylight in view of hundreds of people in a busy market area, police have yet to make arrests. Additional Deputy Commissioner of Police Harsha Vardhan said on March 4 that officers had questioned people and the investigation was ongoing.

In a video on social media, the bound Pastor Tete is seen sobbing as more than 150 people – including schoolchildren in uniform – surround him, taunt him and strike him.

Pastor Tete, 35, told Morning Star News that the assailants incited the schoolchildren and other passersby to shout, “Hail lord Ram” and to hit him for alleged conversion activities.

“A huge crowd of around 150-200 people surrounded me and assaulted me, including schoolchildren who kicked me with their legs,” said Pastor Tete, who was punched and kicked in the head, chest, stomach, back and repeatedly slapped in the face.

“They hit me on my head so many times that I began to bleed from my nose and mouth – I thought that my nose bone was broken,” he told Morning Star News. “They got water and splashed it on my face, wiped the blood that was oozing out with a handkerchief and started to hit me again.”

The Hindu extremists had seized his phone, bag, Bible, motorbike, helmet and vehicle documents. Initially he had been beaten about four miles away at the Bhati Mines area at about 10:15 a.m., from which he was abducted, bound and beaten until about noon, he said.

No passersby had the courage to question or report the brutality of the attackers, he said.

“I was silent like Jesus was on the cross,” Pastor Tete said. “All my strength was gone. My vision became blurred, and I was not able to hear properly because of being slapped hard on my face repeatedly. I lost my voice for some time and was not able to further shout for help.”

At one point he thought he would be killed, he said.

“Later they started to say, ‘Get a thick bludgeon, and let’s hit him,’” he said. “Now, if they would have hit me with a bludgeon, I would be dead.”

After abducting him, the Hindu extremists initially said they were taking him to the Maidan Garhi police station, but they changed their minds and turned back and began to threaten him, he said.

“They said, ‘We will break your legs, tie you to a tree,’” Pastor Tete told Morning Star News. “They were conspiring to kill me. I pleaded and said, ‘Brothers, do not do this. What wrong have I done, let’s talk this matter out. It is not good; you are troubling an innocent man.’”

A crowd of more than 30 people gathered, and the Hindu extremists instigated them to assault him, he said.

“They punched me, threw me down on the ground, kicked me, and stomped over me,” he said.

The assailants then brought him to the crossroad and tied him to the iron post with a rope.

“Even the spectators could have questioned the men beating me to not take the law into their hands, and that if they had some issues, they should call the police,” he said. “But it is so hurting that nobody stepped forward. Everybody mutely watched them treat me in such an inhuman way.”

Pastor Tete said he did not know how, at about noon, the ropes binding his hands came untied.

“Only the Lord saved me – I believe that the Lord opened my tied hands,” he said.

Pastor Tete then managed to escape and, hiding in lanes behind vehicles, reached home, he said. He found his vehicle keys in his pocket, and he later sent someone to retrieve his motorbike. The assailants had left his mobile phone, motorbike papers, helmet and other possessions at one of the area shops, and church members collected them for him the next day, he said.

Originally from Simdega District in Jharkhand state, Pastor Tete has been ministering in Delhi for the past 18 years and pastors a church whose name is undisclosed for security reasons.

Instead of collecting evidence from the CCTV footage of the assault at the intersection where he was tied up, police called Pastor Tete to the Bhati Mines area, gathered some women and asked them questions about his preaching, he said.

Scroll.in reported that the FIR has been registered under Indian Penal Code sections for kidnapping or abduction with intent of wrongful condiment, voluntarily causing hurt, wrongful restraint and “acts done by several persons in furtherance of common intention.”

Since submitting a written complaint to the Maidan Garhi police station on Feb. 27, Pastor Tete has received neither a copy of the FIR nor its number despite several requests, he said.

The Head Constable of the Maidan Garhi station, known only as Rajendra, refused to give the FIR number to Morning Star News, stating that matters pertaining to a church cannot be disclosed.

Additional DCP Vardhan confirmed that an FIR was registered and asked Morning Star News to call an hour later for the FIR number – at which time phone calls to him went unanswered.

Pastor Tete said police were twisting the case and downplaying it. Officers told him the FIR was ready on Thursday (March 3), but when he went to collect it, they refused to give it to him, he said. The pastor has been going to the police station almost every day to request a copy of the FIR, but officers refuse to give him a copy or give an update on the case, he said.

The hostile tone of the National Democratic Alliance government, led by the Hindu nationalist Bharatiya Janata Party, against non-Hindus, has emboldened Hindu extremists in several parts of the country to attack Christians since Prime Minister Narendra Modi took power in May 2014, religious rights advocates say.

India ranked 10th on Christian support organization Open Doors’ 2022 World Watch List of the countries where it is most difficult to be a Christian, as it was in 2021. The country was 31st in 2013, but its position worsened after Modi came to power. — Morning Star News

If you or your organization would like to help enable Morning Star News to continue raising awareness of persecuted Christians worldwide with original-content reporting, please consider collaborating at https://morningstarnews.org/donate/?