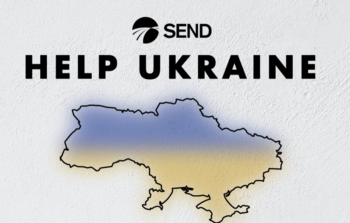 “I still love Russia,” I said to my wife in a conversation when we found out Russia invaded Ukraine. It’s not the first time I have said this to her. We have had this conversation many times ever since we left Russia over two years ago as missionaries. We were only there for two years, most of that time being spent learning the language, but it was enough for us to fall in love with the little joys of life there: the walks through parks, talking with shopkeepers, making friends, experiencing new holiday celebrations, going to church, finding new favorite foods, life in our little apartment and the tree with red berries outside. We talk about these things along with the difficulties we had there as missionaries and still miss our days there.

Yet, here we are with Ukraine and Russia in conflict and therein lies my personal conflict: I want Russia to be stopped but I still love her. I find myself thinking about how Ukrainians are feeling and then a tension rises up as I wonder about how Russians are feeling. I feel tension because everywhere I look on social media, Russia is seen as an enemy yet I still love her. My heart isn’t just breaking for Ukraine. It breaks for Russia too because, in the end, they also need the Gospel.

A few years ago, while in Russia, I traveled South to another region with my team leader in order to help a church organize and develop new leaders. While we were there, a man wandered into the church and began to talk with us. He found out we were Americans and after speaking with us a bit he asked us, “Why does America hate us?”

My team leader responded on a personal level and said, “Since we began talking, have I given you any reason to think that I hate you?” The man shook his head and replied, “No.” My team leader then asked, “Do you think that we could be friends even though our governments don’t always get along?” At that point, something interesting happened within the man. He looked as if he had heard an option that he hadn’t considered before and he liked it. It seemed as if he saw us as individuals rather than as representatives of a country that has a fragile relationship with his own. He said, “Yes, we can be friends still.”

Ever since I witnessed that conversation, I have carried that mentality with me: seeing people rather than countries. When I say, “I love Russia” I mean that I love the people…all of them and I desire for all people to hear and receive the Gospel.

So, what can I do? What can we do? We can keep a perspective in line with God’s, “who desires all people to be saved and to come to the knowledge of the truth” (1 Timothy 2:4). We can help our brothers and sisters in Ukraine and still love Russians. We can pray for Ukraine and still pray that ministry in Russia to reach the unreached peoples of Russia continues. — SEND International