By Jerry Wiles – A few years ago I visited a region in Kenya where there had been several years of severe drought. Most of the water wells in the region were dry. Living Water International had drilled a deep well in the area about eight years earlier, and it was one of the few productive wells in the entire region. People were traveling long distances to get water for their basic needs and their livestock. We were told that more than 30,000 people were getting water from that one well they called, “The Miracle Well.”  A missionary serving in that region told us that thousands of people would be dead if it was not for that well.

The water committee managing the well was made up primarily of Masai pastors. They had worked out a system of taking turns getting fuel for the generator, and an arrangement of allowing people to get water every other day. They reported that 80% of the people in the area had come to Christ since the well was put in. That experience made me appreciate even more one of LWI’s tag lines, “Saving Lives and Changing Destinies.”  It’s a tangible demonstration of the power of safe water and the Living Water of Jesus.

Alive because of You

On that same trip, at a reception in Nairobi of government officials, business and ministry leaders, a man approached me and said, “I am alive today because of you.”  When I asked what he meant, he told me a story of how Living Water International had drilled a well in his village when he was a little boy. He shared how the well had transformed the entire community. Access to clean water was used to improve the health, educational opportunities, economic development, as well as the spiritual and social life in the community.

Reports of God at Work

It is always encouraging to get reports of how God works in such amazing ways when we can share Water and the Word. In a follow up Orality Training session in Southern Ethiopia, an evangelist and church planter shared how he had used the training. He shared stories of Jesus in a community where the chief elder and Muslim imam was present. After hearing some of the stories, the chief, who was distraught over the fact that his 10-year-old daughter had gone missing for several days, asked the evangelist if Jesus could still perform miracles today.

The evangelist told the chief that Jesus still preforms miracles today. So, the chief said if Jesus could help find the daughter, he would become a follower of Jesus. The evangelist agreed to pray that they find the daughter, which they did the next day. They chief followed through with his promise to follow Jesus. Not only did he embrace the Good News, his family and eventually the entire village came to Christ. 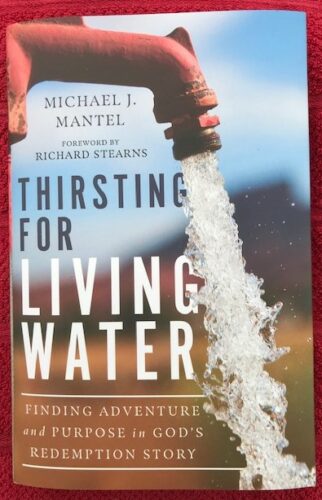 There are numerous accounts of how God has worked over the past 30 plus years history of Living Water International. Many of those can be found in Mike Mantel’s new book, “Thirsting for Living Water:  Finding Adventure and Purpose in God’s Redemptive Story.”  The more we understand of God’s work in the past, the greater our faith will be to believe Him to work in the future. One of the founders of LWI, the late Fenton Moorhead use to remind us often, “With Christ in our lives, the best is yet to be.”