Then Pharaoh called for Moses and Aaron, and said, “Entreat the Lord that He may take away the frogs from me and from my people; and I will let the people go, that they may sacrifice to the Lord.”

And Moses said to Pharaoh, “Accept the honor of saying when I shall intercede for you, for your servants, and for your people, to destroy the frogs from you and your houses, that they may remain in the river only.”

In what is arguably the most amazing answer ever given in all of Scripture, when Moses asked him when he wanted the frogs to go, Pharaoh didn’t say “Immediately!” or “Right away!” He said, “Tomorrow.”

The frogs covering his land were troublesome indeed, but nothing he couldn’t live with for one more night.

“No problem,” a man told me. “So I smoke a little grass now and then. I’ve got tensions during the day, problems at home. And if I can just get away and smoke a bit, I can relax.”

“We only drink socially,” they say. “After all, we don’t want to be left out of the office parties and civic functions our jobs require us to attend.”

“I know he’s not a Christian,” she says. “But he’s getting there. And I know if I keep dating him, one of these days, he’ll come to church with me. “Sure, he’s a bit ‘froggy’ right now. But soon, he’ll turn into a prince. I just know he will.” 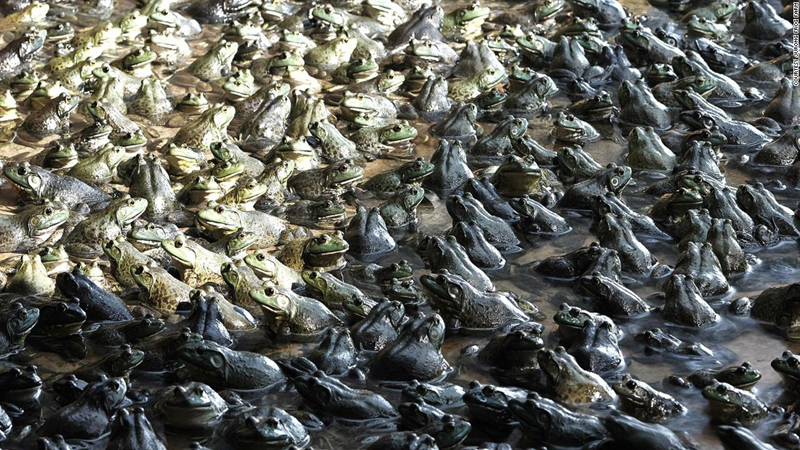 And we say the same thing concerning everything from a questionable relationship to a hot temper, from a propensity to lie to a curiosity about pornography – until suddenly we wake up one day and realize our houses, ovens, beds, and kneading troughs are filled with frogs; until suddenly we realize that what we once thought we had under control has hopped out of its riverbed and is, instead, controlling us.

Pharaoh came to the stark realization that the frogs which he once encouraged his people to worship, that the frogs he depended on to keep the insect population at bay were out of control. “They’ve got to go, Moses,” he insisted. Yet when Moses asked him when, he answered, “Tomorrow.”

Amazingly, I would have thought he would have said, “Get them out of here right now! Today! Immediately! Quickly! I can’t stand them another minute.” But that’s not what Pharaoh said. He said, “Tomorrow.” Why? He wanted one more night with the frogs. Oh, he knew they had to go – but not quite yet. Not right now.

There are activities, people, places in our lives about which the Lord says, “You thought you had that under control, all hemmed in. But now it’s hopped its banks and is taking over.”

The problem is, by saying, “Tomorrow,” Pharaoh’s heart grew harder and harder still. He could have gotten off relatively easy had he been serious and said, “I want the frogs to go now, right now. I’m repenting of what I’ve been doing. I’m changing my way of living. Moses, you and your people are free to go.”

Had he done so, Pharaoh would have spared himself, his family, and his country the unbelievable horror that awaited them.

The Bible says, “Today if you hear His voice, harden not your hearts” (Hebrews 4:7) “because, although there is pleasure in sin for a season, the end result is always destruction.”

So what are we to do concerning the sin that controls and plagues us? I suggest four things:

Every sin I’ve ever committed, might commit, will commit, is paid for, washed away completely by Jesus’ blood shed for me on Calvary. That’s the gospel. But because whatever a man sows, that shall he also reap (Galatians 6:7), every sin I plant carries its own inevitable repercussions. Therefore, wise is the man who stays as far away from that which he knows will hurt not only himself, but the people around him.

To repent simply means to change directions. Where you once said, “This is OK,” change your mind. Make a U-turn. Instead of justifying, rationalizing, excusing sin, call it what it is and agree with the Lord that it’s gotta go. Right now.

Perhaps the most potent passage of Scripture regarding sin, Romans 6, tells us that when Jesus died on the Cross, not only was the penalty of sin paid for, but the power of sin was broken.

As believers, we may choose to sin; we may decide to sin; but we never have to sin because the power of Christ resides in us. And He who told us to go our way and sin no more, to be holy for He is holy, also gives us the power to carry out his commands.

Refuse to go where the frogs are croaking. You know exactly who the people and the places are that you need to avoid to stay free.

You who have heard God’s Word, you who have heard his heart, don’t be like Pharaoh and wait for your own heart to harden. Instead say, “I’m going Your way, Lord, not tomorrow, not Tuesday, but today!”