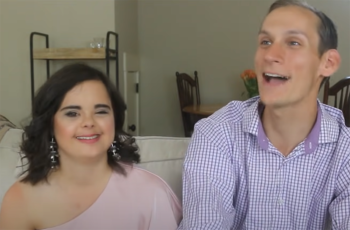 Chloe fell in love with and married Jason Ivey. It’s a heart-warming and romantic story. There’s just one notable piece of information to add. Both spouses are developmentally disabled.

Chloe has Down Syndrome. Jason has autism, ADD and bipolar disorder.

“People with autism want to feel important; they want to feel needed. Honestly, it’s magical. That’s how I actually feel,” Jason said in an interview with Special Books for Special Kids, a YouTube channel that promotes understanding of people with disabilities. “Yeah, there’s ups and downs. But I’m telling you Chloe is such a perfect wife. And even when I’m down she lifts me right back up and makes me so happy.”

To see Chloe and Jason talk about marriage and how God brought them together is a moving reminder that God has not made anyone inferior. People with special needs have much to teach others about happiness and simplicity in a world that seems overly complicated to many. 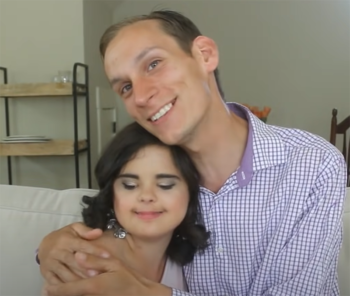 The love oozes from the video. “She is like drop-dead gorgeous,” Jason says. “I was worried, like, ‘Lord, I am way marrying out of my league.’ My goodness! Look at this beauty!”

But their fairytale story also raises unsettling questions the video doesn’t address: Would they have children? Would their offspring be more prone to being born with a disability? Who would care for the children?

“Sometimes I think in my mind ‘I want a baby so bad,’” Chloe says. She has a realistic doll that she treats as her baby. “This is Giselle. She represents what we want for the future.”

Both Chloe and Jason recognize their limitations. They say they are 80% independent, which means that 20% of their adult responsibilities are handled by care-givers, often family members.

In a world where abortion is pressed on parents when an ultrasound reveals a potential disability, in a world where government imposes decisions on private citizens in the name of the common good, some questions linger:

Who decides if they have kids? Should society try to prevent a child being born into a world where foster care is a strong possibility?

Consider California, where Child Protective Services by law gets involved with kids abused or neglected if parents are diagnosed with a developmental disability, says Ryan Faulk, a manager at Joni & Friends in Agoura Hills.

We as Christians should always fight for life. Whichever way we counsel, we have to choose life. — Martie Kwasny

“There are very tough questions,” says Ryan, who helps churches minister to people with disabilities. He was reluctant to provide easy answers but suggested the decision to have children should be examined on a case-by-case basis, along with coaching by the supporting family.

For Martie Kwasny, a Joni & Friends director in Jackson, Mississippi, a decision to prevent parents from having kids should never be decided by the government or outsiders. All human life is sacred, and conception is God given, she says.

Martie says there have been cases of kids with no disability being born to parents with disabilities — and the raising of the child, often supported in the context of a loving and supportive church, has been successful. 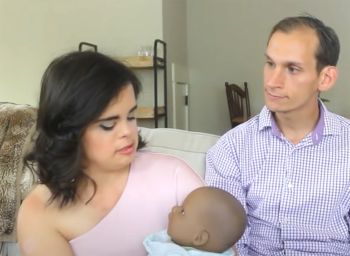 Chloe and Jason would be gratified by her viewpoint because their deep longing is to have kids.

“Sometimes I think in my mind, ‘I want a baby so bad,’” Chloe says. “Then I say to myself, ‘Well, Chloe, you have to wait a little longer.’”

“Giselle represents what we want for the future,” she says. “We don’t get upset about not having a baby. We just kind of miss it. We kind of get sad.”

Chloe says she can cook and care for Jason, but Jason admits he needs help with budgeting. Nothing in the video explained if they have a job or how they provide for themselves. The video also doesn’t delve into the support their families presumably give them.

“Marriage is just fun. Getting to just go to bed with her and have somebody to hold and to wake up and kiss good morning is a blessing in itself,” Jason says.

“I can make black beans and rice and spaghetti and meatballs,” she says. “I can make hamburgers or salad or French fries.”

The good eating was making Jason start to get a little chubby, so he decided to start cycling to slim down and “buff up.”

“Chloe, I will always love you, no matter what. You’re magical,” he says. “You’re beyond caring. You always take care of me.”

Jason wants to grow old with Chloe and pass away in bed with her when they’re 70 or 80.

“I just love holding her. Every time it just makes me calm,” he says. “That’s the best part about marriage for me — just holding her.”

Did you know the largest unreached people group in America are disabled people?