Thank you so much for praying for us and loving us and all those that we serve, and our animals too! As you know, we use horses and mules to carry relief supplies but we also have dogs and monkeys that are our companions on these missions. One of our most wonderful companions was Max, a Dutch shepherd whose loyalty, bravery and gentleness to people was a blessing to us all. Max passed away last week here in Burma at the age of 17, which in dog years is well over 100 years old.

His last mission with us was running along as we did physical training with new trainees and then going out with us among displaced families who were hiding in the jungle. Because of his brindle coloration and his size, the Karen people always said, “He looks like a tiger but he’s very sweet and he loves us people.” As we walked into the hide site of a family who had been wounded and traumatized by a Burma Army airstrike, Max walked in amongst the families in their tiny shelter and lay down between the children, who quickly overcame their fear of him and began to pet and stroke him; he soon went contentedly to sleep. 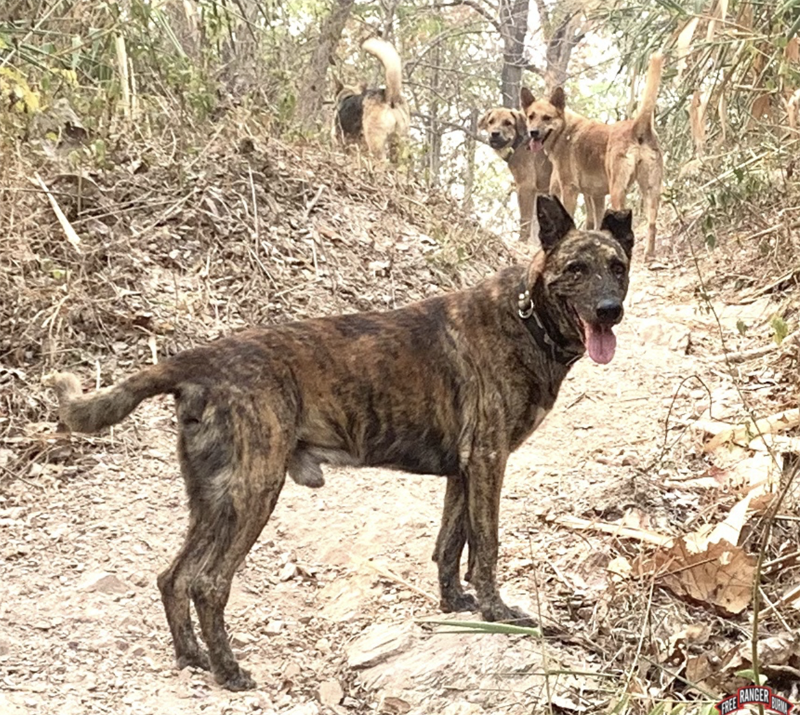 In all his years with us Max never bit or threatened a person but if any aggressive dogs came from outside, he would instantly challenge them. If they did not fight, he wouldn’t fight, but if they snarled at him, it was a fight that he always won. Up in the hills walking with our children he killed over 10 cobras, including one that partially blinded his right eye. He came to the defense of some of the children on our team on a walk one day, by springing on and biting a cobra behind the neck and killing it. 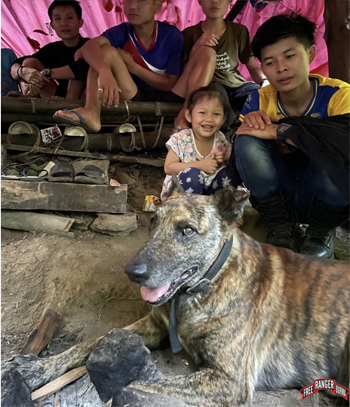 In Burma, on this series of relief missions, we saw he was becoming weaker and would struggle to get up and limp after us. He would eventually warm up and go for a complete run with us and the trainees. Doing a cross-country ranger run which culminated in the crossing of swift river he gamely jumped in swam through the rapids with the students. When we put backpacks on to do a mission he would also follow us. He was my shadow and he would not let me go anywhere without him. When I woke up in the morning, he was at the door wagging his tail. If I went out to go for a run, he went with me; if I walked up to our little wood and bamboo office, he followed and laid at my feet as I worked. If I got up to see something outside, he followed me. When the Burma Air Force, who bombed this area multiple times, flew over, he would stand right next to me and look up and stay very close to me as if he was protecting me.

Finally, in July, we noticed he was having a harder and harder time getting up and was becoming more and more crippled and unsteady on his feet. The doctors in our camp treated him the best they could and we all prayed for him but in the end, he went to sleep and did not wake up. He’s buried behind our house here in Karen State, Burma, and we planted flowers on his grave. We thank God for this wonderful animal in our lives who was part of our family and part of the lives of our teams and ethnic people that we work with. Max added to the richness, beauty, security and joy in our lives.

Thank you all who read this for letting us share our hearts with you. May God bless you all in Jesus’ name.