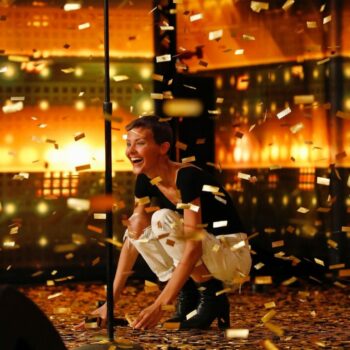 Three times she’s fought off cancer and she’s still not free from its wicked clutches.

Jane Marczewski — who melted the nation’s heart singing “It’s Okay” after saying she had a 2% survival chance on America’s Got Talent — has withdrawn from the final rounds to battle cancer.

In her audition, Jane, who uses the stage name Nightbirde, had stunned judges when she matter-of-factly mentioned she wasn’t working because of cancer in her lungs, spine and liver.

“It’s important that everyone knows that I’m so much more than the bad things that happen to me,” she said smiling. Her exuberant joy and pristine voice prompted Simon Cowell to hit the golden buzzer shortcutting her into advanced rounds. Her song (“If you’re lost, we’re all a little lost, and it’s alright”) shot up to #1 on iTunes 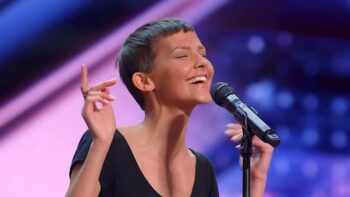 A Zanesville, Ohio native, Jane Marczewski, 30, decided to make a life of her God-given musical talent when she was a student at Liberty University. She married, launched her life, and then got struck by cancer. At first her husband stood with her, but when she relapsed, he divorced her.

Her smile and bursting optimism wowed the audience. “I have a 2% chance of survival, but 2% is not 0%,” she says. “You can’t wait until life isn’t hard anymore before you decide to be happy.”

But when she’s alone, she faces the daunting odds. Because she’s honest, she sometimes succumbs to depression. But while she struggles and cries out to God about the unfairness of her fate, she grows like an ordinary Christian never will.

“I am God’s downstairs neighbor banging on the ceiling with a broomstick,” she says on an MP4 circulating in churches. “I show up at his door everyday, sometimes with songs, sometimes with curses, apologies, gifts, questions, demands. Sometimes I use my key under the mat to let myself in. Other times I sulk outside until He opens the door to me Himself.

“I’ve called God a cheat and a lie and I meant it,” she says. “I’ve told Him I wanted to die, and I meant it. Tears have become the only prayers I know… night and day, sunrise and sunset. Call me bitter if you want to; that’s fair. Count me among the angry, the cynical, the offended, the hardened. But count me also among the friends of God, for I have seen Him in rare form. I have felt His exhale, laid in his shadow, squinted to read the message He wrote for me in the grout.” 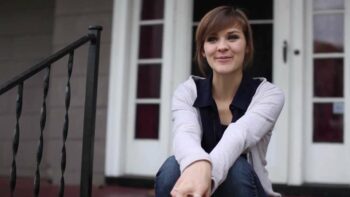 Her words, robed in poetry, address Job’s experience of being crushed unjustly.

“I want to lay in His hammock with Him and trace the veins in His arms. I remind myself I’m praying to God who let the Israelites stay lost for decades. They begged to arrive in the Promised Land, but He instead let them wander, answering prayers they didn’t pray.”

As she scrutinizes her life searching for strands of mercy, she resonates with the story of God feeding the Israelites with manna in the wilderness.

“I see mercy in the dusty sunlight that outlines the trees, in my mother’s crooked hands, in the blanket my friend left for me, in the harmony of the windchimes,” she says. “It’s not the mercy I asked for, but it is mercy nonetheless. And I learn a new prayer: ‘Thank You.’ It’s a prayer that I don’t mean yet but will repeat until I do.”

Already she has outlived the prognosis of three months’ life expectancy given at the beginning of 2020.

“Call me cursed, call me lost, call me scorned, but that’s not all. Call me chosen, blessed, sought after, call me the one whom God whispers His secrets to. I am the one whose belly is filled with loads of mercy that were hidden for me.”

Not many have her qualifications to utter philosophical musings.

“I’ve heard it said that some people don’t see God because they won’t look low enough, and it’s true,” Jane meditates. “Look lower. God is on the bathroom floor.”