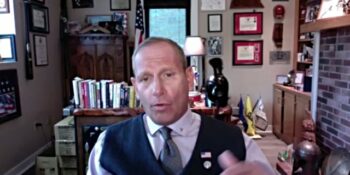 Rescuing thousands of trapped American citizens and endangered Afghans appears to be unfeasible in light of the present conditions surrounding Kabul Airport.

The chaos surrounding the airport is bad enough, but at the outer perimeter of the airport – not seen in news footage – the Taliban is tightly controlling ingress and egress with the help of captured intelligence.

“The outer perimeter has serious problems because they have lists with the names and phone numbers of every one of the folks who worked for our country for the last 20 years,” retired U.S. lieutenant colonel Oliver North told Sean Hannity on August 19th.

“They have the bank records; they’ve got it all thanks to the embassy,” he said.

According to Col. North’s sources, the Taliban captured the payroll data from the embassy and banking records from Kabul Banks revealing the names, addresses and phone numbers for locals now being hunted down.

The solution to this unfolding tragedy comes from another retired military officer, Brig. Gen. Don Bolduc U.S. Army, who served 10 tours of Afghanistan.

“This is a time for bold action. It is not time to sit back on your hands and hand-wring,” Gen. Bolduc told Fox News.

He proposes re-securing Bagram Air Base, as well as airports in Herat, Kunduz, Kabul, and Kandahar, then creating safe corridors, going into the provincial areas, the districts, and villages to provide safe passage for American citizens and Afghans that need to get out.

Fox News host Bill Hemer noted this plan would require a lot more troops. “Do you think this administration has the stomach for that?” he asked the general.

“They had better get the stomach for it. They had better drink some Pepto Bismol to clear out their system because this is what needs to be done,” he said.

“There is no other way to do it. Trust me. After 10 tours in Afghanistan, losing 72 people, I don’t want to do it, but they made a terrible decision here. Look what it’s got us. We have to do it. We can do it. You can’t trust the Taliban.