About once a week, one homeless man or woman dies in Venice, CA.

This area – until recently cleaned up by Sheriff’s deputies – has been thronged with homeless and criminals.

“When people say we have a ‘homeless problem’, that tells me they don’t have a clue; it’s a human problem, not a homelessness problem,” Ashman, 57, told God Reports. “There are all kinds of reasons people are homeless. Then you throw alcohol and drugs into the mix. But Jesus is the answer. He’s the One who’s going to heal their minds and set them free.” 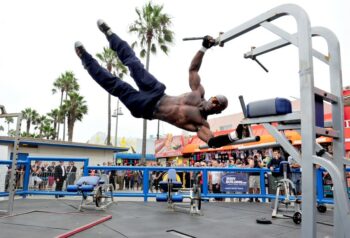 For three years, Michael has ministered to the homeless, arguably the most burnout-prone ministry because positive results are few and far between, while death and destruction abound.

The homeless, he says, have zero self-control and consequently get devastated by addiction, violence and disease.

“Every now and then, someone comes by and says, ‘Do you remember me? You fed me. You helped me,’” Michael says.

One such was Ivan, who once slept on the beach because of Southern California’s year-round temperate climate. One day he arrived cleaned-up and smiling. He had a small place and two jobs. The day he greeted Ashman, he was handing out clothes to his street friends, paying forward the favors.

Native to Southern California, Ashman got to know Jesus at a Billy Graham crusade at age 15. He got off drugs and was attending church but was “too young and not very involved,” he says.

In 1996, he got married and had kids but walked away from church and lost his marriage. He didn’t immediately come back to church because guilt coiled in his heart like a snake.

“I’d gone too far,” he explains. “I looked in the mirror every day and said, ‘God, what am I doing? I’m killing myself.’”

On Valentine’s Day in 2016, Ashman returned to church after “my life pretty much fell apart.”

He sat in the back and wept. He kept going to church “and wept every service for quite a while,” he says. “God was fixing me.”

Eventually, he launched his ministry, a 501c3 titled “You Matter.” He wears “You Matter” T-shirts on outreach, and it’s a good message to people that society has cast aside, fears and finds revolting.

“I just felt like this is what God wanted me to do,” Ashman says. “It was so powerful in me. It was beyond passionate, it was a driving force. I couldn’t not do it. I feel Jesus in me, and He loves people through me.”

For most of his life, Ashman worked as a contractor and a phone and computer communications installer, but as his non-profit has taken off, he’s neglected his business and given himself more and more to ministry.

While politicians promote social theories for dealing with the homeless, Ashman says only Jesus can truly change them.

Recently, the L.A. Sheriff ignited a spat with the mayor’s office by publicly accusing politicians of being incompetent and making an incursion into Venice to get the homeless off the streets. As a result, fewer homeless are coming to Ashman’s ministry. He fears that they have simply moved to other areas.

Venice is famous for its skatepark and skaters, earning the moniker Dog Town in conjunction with Santa Monica. Canals were dug like Italy’s same-named counterpart but today remain mostly overlooked by tourists. Instead, the body builders on Muscle Beach and street magicians and musicians continue to draw crowds of international gawkers.

Venice has been drug-infested and dangerous, but in recent decades well-heeled homeowners have moved in and raised the socio-economic profile of the neighborhood. There are now trendy shops and restaurants everywhere in Venice.

The new well-to-do neighbors don’t want the danger but also tend to endorse liberal political policies, like being tolerant with homeless residents. So, Venice continued for years in a dilemma of inaction — until recently. What tipping point prompted the sheriff to clean up Venice?

Ashman maintains the recent crackdown will not solve the internal emotional crisis of broken human beings whom God loves.

“It’s supernatural to have self-control,” he explains. “It requires being born again. That’s what’s needed.”