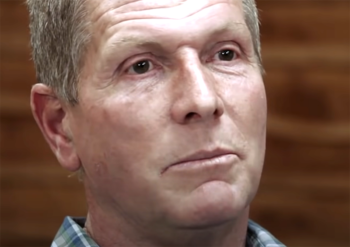 Paul Knights waited until the lodge was full to officially quit in an electrifying confrontation: “I denounced Freemasonry as a satanic and demonic society,” he said.

Paul spent 14 years in the Freemasons. He joined mostly to help his tree surgery business in England, but the secret society was a part of his search for meaning and healing after he lost his dad and his wife.

“There was a hole in me that I couldn’t fill. I used to go horse-riding, bike-riding, walking, dancing, martial arts, I used to go diving, snow-skiing, water-skiing — anything just trying to fill this hole in me,” he says on a 44-minute John R. Lilley video. “And I couldn’t do it. I was on this mission to spend every moment of the day doing something. I was still grieving for my father.”

His father died when Paul was only 11. “I encased in a concrete case and put the pain inside of me so far down,”

Becoming a Freemason did in fact bring a boon in his tree business; it grew by one-third, he says. “I wasn’t really interested in the secret ceremonies but in the meal after and the social aspect,” he says.

Freemasonry traces its origins to a builders guild from 13th century Europe. It features secret rituals to advance within the organization, scaling up by levels and degrees. The rituals include oral pledges and secret symbols that Paul found out later were the same used by witches and warlocks.

In one of the first rituals, the inductee is instructed to say and memorize what Freemasonry is: “A peculiar system of morality veiled in allegory and illustrated by symbols,” he says.

“I didn’t really understand what I was saying,” Paul recounts. “‘Peculiar’ means it’s a warped morality. Every symbol that is in Freemasonry are the same symbols as is in the covenants that the witches and the warlocks take to assume their obligations and promises into their different degrees, different levels. I didn’t know that.”

Around the same time, he dated a girl for eight months and married her, without realizing she had a double personality. She had suffered from anorexia. She left him and returned to him, but their relationship had the stability of jello.

After six months, “I couldn’t handle it anymore,” he says. The loss of his wife became a second pain after the loss of his father.

“Inside there was this pain. I’d given my life to this girl, so my life was pulled apart,” he says. “I liken it to two bottles of acid, one from my father dying and one from my wife living. Suddenly they were poured together and I couldn’t cope.”

That’s when he remembered the God of his childhood. He had attended High Anglican Church, sang in the choir, learned to pray, but was bored out of his mind by Sunday school. The “frocks and frills” did not impress him.

But when he fell upon agony, he remembered to pray.

“I don’t know if You’re there. You may be a God that is over the hill and far away,” he prayed. “I’m such a sinner. I haven’t spoken to You for years. But I need help. I’m desperate.”

He didn’t know what else to say.

Two days later, after taking down a tree for an older woman, she pointed a finger at him and declared: “The Lord has been speaking to me. You’ve been praying. I’d like to help you today.”

He denied having prayed, but she stuck to her guns.

She invited him to a Full Gospel Businessmen’s meeting three weeks later at the Toorak Hotel in Torquay. Paul didn’t want to go and gave her no hopes of his attending.

True enough, he went out dancing at the club the night before, a surefire way to sleep through and wake up at 11:00 a.m. and miss the breakfast. But come Saturday morning, he strangely woke up: “I felt full of beans. I felt wide awake.”

A strange sensation nagged him that he had something to do that Saturday morning, but he couldn’t remember what it was.

God led him to his closet. “Something leads me to the wardrobe, and I put my hand in the pocket and I draw out this card that this lady had given me,” he remembers. “It’s three weeks later. I’d forgotten all about this invitation.”

There was a breakfast promised: “I just love breakfasts. The Lord just knows how to get you.”

Paul decided to go. When he showed up, he saw the woman who invited him.

“The Lord had to get you up and remind you to come,” she said.

Paul was taken aback by the prophetic insight into his private world. “This is spooky stuff,” he thought. But the smell of bacon and eggs overpowered his worries, so he went in.

The brother who shared his testimony struck a chord.

“His life was so much like my life. He had lost a parent. He was into martial arts,” Paul recalls. “So I started listening.

“In the middle of his talk, he said, ‘There’s a man in here, you’ve been brought up as a Christian. You’ve sung to God. You’ve been taught about God, You’ve prayed.’

“How does he know me?” he asked himself. “The Lord has brought you here this morning to become a born-again Christian.”

In his mind, Paul saw images of himself. “It was like a flash of a video. I saw myself praying, I saw this woman praying. I saw myself getting up in the morning and getting to the place.

“It was like a washing machine going on in me,” Paul recalls. “I knew in my heart that God had brought me there.”

By meeting’s end, Paul wound up accepting Jesus into his heart.

“I prayed the salvation prayer, and suddenly the presence of God hit me,” he says. “I was carrying a weight that was so heavy. You may know the old cement bags 100 pounds each. I used to carry two of them and run to a site and give them to two guys.

The Lord impressed on his heart, I’ll have that weight.

“It was that kind of weight that just lifted off my shoulders. This backpack that I didn’t realize was there and had so much in it and over the years — the unforgiveness, the bitterness, the blame, He took that. I had to look at my feet to make sure I was still on the ground. I felt so light. I felt the Lord had totally touched my life. I started crying. I hadn’t cried since my father died. I cried for three hours. I knew God had touched me.”

As he left the meeting, God told him to break up with his latest girlfriend.

Paul agreed that he needed to do that, but he also worried and mentioned to God, “She’s a bit theatrical. I’m going to have such a scene. I need the courage to do it.”

During that time, his brother visited with his family. The middle daughter, Jasmin, ran across the road suddenly, got hit by a car and was launched into the air and tumbled down the road. She lay completely still.

Time stood still. The motor was quiet. The driver stayed in the car. “Finish with this girl,” God told Paul, who ran over and scooped her prone lifeless form up on the road. “There will be nothing wrong with her.”

Time unfroze. The sounds of the car could be heard, as well as the screams of his brother and sister-in-law. The driver got out. Paul took the child to his brother and gave it to her.

“She’ll be alright,” he said with the confidence of a man who has heard God.

His brother didn’t believe him and took her to the hospital, but after ample testing, the girl was fine.

“She was in the hospital for 48 hours observation,” Paul says. “All she had was a scratch. But I know she was dead when I picked her up.”

Jasmin’s rescue was a miracle, but during it God had again ordered Paul to break up with his girlfriend. He dreaded it. The next day he knocked on her door.

“We have to finish this,” he said.

“Fine,” she replied, and slammed the door in his face.

Paul was astounded. He hadn’t expected it to be easy.

Two months later, his sister-in-law visited and asked: “What happened, Paul? What happened in the street the last time we came down?”

“I know, and God brought her back to life through you,” said the sister-in-law, who previously wasn’t a believer.

Soon after breaking off with his toxic girlfriend, Paul met Angela, who was a hairdresser, divorced and reluctant to formalize another relationship.

A lady showed up one night to talk to Angela as she was closing shop. “You’ve met a man, and he’s born-again,” she prophesied. “He’s the man for you. You need to trust him.”

The woman disappeared. “I really believe that was a messenger,” Paul says. “An angel.”

But one day “a cold icy feeling went through my body” in the Lodge. “I felt there was something wrong that whole night.”

Days later, he asked God if he should quit Freemasonry. A man gave him a couple of CDs, testimonies of people who got out of Freemasonry and discussed the demonic elements.

What have I gotten myself into? he wondered.

Then he went to another Full Gospel’s Businessmen’s breakfast. An ex-Freemason felt led to share with him at the breakfast about getting out. In the afternoon, an evangelist named David randomly picked him out and gave him scriptures.

“There were the scriptures that showed He wanted me out of Freemasonry,” he said.

With that, Paul quit his positions in Freemasonry but continued to attend for two years. Why would God permit this? Because people asked about why he resigned, and he could testify about Jesus in response.

At the end of two years, it was time for Paul to fully quit the group, and God gave him the perfect plan and the perfect timing.

Because the meeting was held on a routine-breaking Wednesday, a lot of area Lodge masters and members were visiting: it was crowded.

Paul took advantage of a protocol rule: whoever comes late must apologize in front of everyone to the Master. At his “apology,” Paul said, “I love each and every one of you.”

“But because of the curse that has been placed upon me and my family, I denounce Freemasonry as a satanic and demonic society, and I resign.”

Everyone went silent for seconds that seemed to prolong into painful minutes.

The Master was the first to break. He banged the gavel and said, “Get him out! Get him out!”

“His face distorted, and he looked evil,” Paul says. “He was so angry.”

Paul was ushered out. One of his ushers pointed his finger at Paul and said, “You’ll never work again in this area.”

“The Lord is my Shepherd,” Paul replied undaunted. “I shall not want.”

His business grew. “The Lord will honor you if you stand up for the Lord,” Paul says.

Paul left the lodge that night and went to church. To the jubilation of the congregation, Paul testified that he had fully quit Freemasonry.

Today, Paul Knights is the pastor of the Mount Olive Ministries Church in Newton Abbot, Devon.

“Through my testimony, so many Freemasons have come out,” Paul says. “The Lord loves Freemasons. He loves those who are in darkness.”