I revel when Dr. Steven Collins (now Director of the School of Archaeology, Veritas International University) returns each year from the Tall el-Hammam excavation in Jordan. It seems that after thirteen years at the site every trowel and shovel put in the dirt adds to the evidence of Tall el-Hammam as the Biblical site of Sodom. This year was no different.

But before I provide an update, let me jump back in history for our readers not attuned to Dr. Collins’ discovery, as set forth in his #1 bestselling book Discovering the City of Sodom (Simon & Schuster/Howard Books 2013), co-authored with Dr. Latayne Scott.

Several years ago Dr. Collins told me his interest in the location of Sodom began in 1996.  Then, he was working on another excavation site but was also leading archeology tours in the Middle East.

It was on one of these trips that Prof. Collins began to question the traditional site of Sodom, what is known as the Southern Theory (attributing the site to the southern region of the Dead Sea).

Collins stated, “I began to read the text in Genesis 13-19, and realized that the traditional site did not align itself with the geographical profile described in the text.”

“Now let me say,” he continued, “that many scholars don’t have a high view of Scripture.  Some even frown upon using biblical texts as a tool for location designation.  Yet my philosophy is that the text is generally reliable and can—and should be—used, at bare minimum, as a basic guide for a geographical profile.”

“So when I read how the author of Genesis describes the area of Sodom and then looked at the area of the traditional site in the Southern region, I said, ‘this can not be the place.  There are too many differences of description.’”

The geographical point at issue, according to Collins, is how the text in Genesis describes the region of the Kikkar, understood as “the disk of the Jordan,” usually mistranslated “plain of the Jordan.” 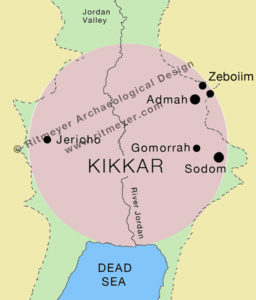 Dr. Collins states, “When the Bible uses the term ‘the Kikkar’, it is only referring to the roughly circular area immediately north of the Dead Sea. Kikkar strictly means ‘circle’ or ‘disk’. This region is the breadbasket of the area, full of freshwater and farmland. All of this is interesting to me because the ancient Semitic word kikkar can also mean ‘flat bread’, like a tortilla here in New Mexico.”

A main contention of Collins’ is that the traditional Southern Theory site of Sodom does not have the geographical parallels described in the text.  Namely: 1) One can see the whole area from the foothills; 2) it must be a well-watered place (described, “like Egypt”); 3) has a river running through it (the Jordan); and 4) must follow the travel route of Lot (who went east from Bethel and Ai, just above Jericho, to Sodom).

How Dr. Collins arrived at this conclusion involves years of research, excavations, and textual analysis with many colleagues, including Dr. Peter Briggs.  Drs. Collins and Briggs developed a means to determine if an ancient text is a “true narrative” through a scientific methodology called “criterial screening.”

The finding? Genesis is reliable for geographical profiles, and therefore can be used to locate sites.

With this bit of knowledge, Dr. Collins set out on a course of discovery.

“When I first had the idea that the traditional site of Sodom (in the southern region of the Dead Sea) was wrong (based upon the geographical indicators), I began to think through the text, coming to conclusion that it was northeast of the Dead Sea.”

After hundreds of hours of research—in the U.S., Israel, and Jordan— Collins concluded that the site of Tall el-Hammam was the one.

“I came to this conclusion based upon its geographical location and the biblical text. In the Bible, Sodom was mentioned first in order; therefore it must have been the largest and most prominent city in the area.  We find that Scripture usually orders cities by prominence and size. With that bit of knowledge we choose the largest site.”

“As a matter of fact,” Collins continued, “Tall el-Hammam was the largest site by a huge margin.”

The current excavations reveal that Tall el-Hammam’s general area is at least 40 hectares (roughly 100 acres), which is huge by ancient Bronze Age standards.

I then ask Dr. Collins for some evidence. 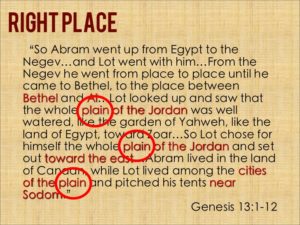 “Well, to start with, the Tall el-Hammam site has twenty-five geographical indicators that align it with the description in Genesis.  Compare this with something well known—like Jerusalem—that has only sixteen.  Most other sites have only five or six, or less.  So, the site has many more geographical ‘signs’ than any other Old Testament city. That’s truly amazing.

“Second, our findings—pottery, architecture, and destruction layers—fit the time frame profile.  Meaning, we should expect to find items, like what we’re finding, from the Middle Bronze Age, the time of Abraham. This is exactly what we’re uncovering.”

“To our own expertise we continue to add internationally recognized scholars to analyze our data, such as the pottery.  One such person is Dr. Robert Mullins, and then there are our colleagues from the Department of Antiquities in Jordan.  Dr. Mullins is an expert in Bronze Age pottery, and there are many others as well. My ceramic expertise also covers the Bronze Age. Their conclusions on the matter reflect that our findings are correct.” 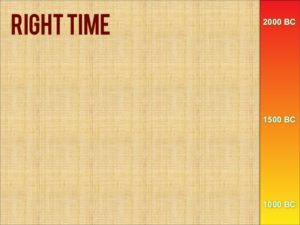 “Though we’re still digging and uncovering a plethora of material and artifacts, and much research still needs to be conducted, I feel that the evidence for this being the ancient city of Sodom is increasing by the day.”

With the story of the discovery in view, let’s now turn to recent updates from the excavation season that ended in March 2018.   To get the information, I met with Dr. Collins over lunch, and later at the ARC (Archaeology Research Center), Trinity Southwest University’s archaeological laboratory.  He gave me an overview on some of the artifacts.

Steve, when we met previously you let me know that you sent out some samples for radiocarbon testing.  Did they arrive?

“Yes. It’s an ongoing effort, and expensive! The latest round of radiocarbon dates have arrived from Beta Analytic Labs. Numerous carbon samples from the MB2 palace level continue to confirm that the destruction date is 1700+/–50 BCE. In fact, every sample from the terminal destruction layer tested thus far confirms this date.”

How does this line up with the traditional understanding of the chronology and pottery? 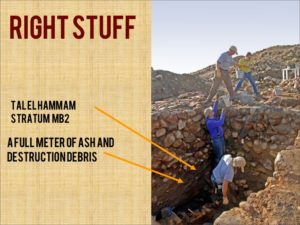 “What I see in this are cracks forming in the traditional assumptions and conventional wisdom concerning Middle Bronze Age pottery, which will perhaps affect the dating schemes typically used by archaeologists to determine the difference between MB2 and what some scholars call MB3. In my mind, I’ve always rejected such a thing as MB3, seen by some as the final century or so (c. 1650-1550 BCE) of the Middle Bronze Age. A few scholars give MB3 as little as 50 years. Whether 50 or 100 years, I have a hard time holding to an archaeological sub-period that’s generally shorter than the uncertainty ranges of dating methods, particularly ceramics and radiocarbon.”

Have the pottery reading confirmed this?

“Yes. In our final pottery readings over the years, a number of diagnostic sherds from Tell el-Hammam have been called ‘late MB2 or likely MB3.’ I’ve always winced when that call came across the table. Even the pottery books (like the oldie-but-goodie by Ruth Amiran; who didn’t use MB3 either) have certain forms given for MB1 (Amiran’s MB IIA; pre-1900/1800 BCE) and MB2 (her MB IIB; post-1900/1800 BCE) that we regularly find at Tell el-Hammam in the very same space, obviously being used at the same time. And these so-called MB3 sherds are found in the exact same context in the terminal MBA destruction stratum. And that stratum continues to date firmly to 1700+/–50 BCE! One possible impact of this may be a rethinking of the date of the terminal MBA destruction at Jericho across the river, which is assigned to MB3 by most archaeologists (including the current Italian-Palestinian expedition).”

Have others confirmed your findings? 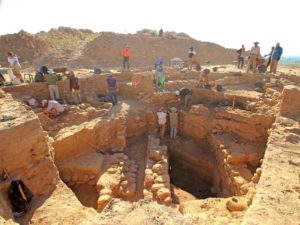 “The similarity of our terminal MBA pottery and Jericho’s terminal MBA pottery has been noted by Dr. Bob Mullins (who anchors our third pottery reading each year). If this is true, then we may need to have some serious discussions with Dr. Lorenzo Nigro (who currently heads the Jericho excavations) about their MBA dating and site interpretation. It may turn out that the 3.7kaBP Event that destroyed Tall el-Hammam/Sodom and the other eastern Kikkar cities and towns may, in fact, have impacted Jericho as well. And thus, Jericho may not have any more so-called ‘MB3’ than Tall el-Hammam. This would shake a few things up, for sure!”

Are there any detractors or skeptics of your conclusions?

“A tiny minority of scholars (Bimson and Wood, mainly), in order to prop up their date for the Exodus and Conquest, have even suggested that Jericho’s MBA terminal destruction could be down-dated to around 1400 BCE (the end of LB1), and thus be associated with Joshua. The 14C evidence at Tall el-Hammam, in conjunction with Hammam’s and Jericho’s ceramics, makes this idea impossible. If anything, the terminal MBA date for both sites will be moved earlier, not later (not to mention the insurmountable historical problems created by down-dating Jericho’s MBA destruction).” 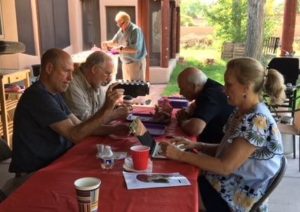 How did the ceramics study go this year?

“We had a great time at the 2018 Ceramiganza (the name given to the yearly pottery read).  We read over a thousand diagnostic sherds from this past dig season, each representing a different vessel. It was very productive. The quality and variety of the pottery from the MBA palace confirms that Sodom was top-tier city, and that its king kept ‘common’ pottery out of his palace. It’s all special, even fancy, stuff. Not to mention that the interior palace walls are up to 1.5 meters thick. The palace is very large.”

If you were to summarize this year’s excavation for a lay person, what three important facets add weight to the fact that Tall el-Hammam is, indeed, Biblical Sodom?

“First, the evidence supporting this is beyond question, I think. The geography, the sheer size of the city, the dating of it—everything’s right. It fits the biblical text perfectly. As I scan the scholarship of identifying biblical sites, this is one of the most solid identifications every made. The few scholars who haven’t embraced this simply haven’t properly (or at all!) analyzed the wealth of data.

“Second, the research conducted by a team of scientists led by Dr. Phil Silva is providing the evidence that there was, indeed, an air burst event that destroyed the MB2 city.  This event is clearly in line with the narrative described in Genesis 19 of a meteoric aerial fireball raining down on Sodom and Gomorrah.

“Third, our archeological excavation is providing strong evidence that corresponds to broader archeological findings in surrounding areas—pottery similarities and the like—allowing us to fine-tune a timeline of history, and therefore provide scholars with a clearer picture of probable events during patriarchal times.  As an example of this last point, our research indicates that the Pharaoh of the Exodus was Tuthmosis IV—I’ve done a rigorous study of this.  This can be extrapolated from the archeological, historical, and Biblical evidence we’re discovering, allowing us to create a timeline of events for the whole of the Pentateuch, especially the time from Abraham to Moses.  We’ve published a timeline based on our research [1 and 2].” 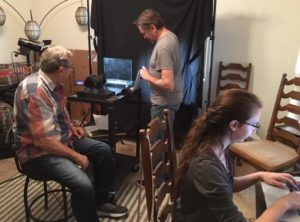 Dr. Collins spoke at Calvary Church in Albuquerque.  His teaching can be found here:  http://www.calvaryabq.org/teachings_view.asp?ServiceID=4314

Steve’s book Discovering the City of Sodom can be found here: https://www.amazon.com/Discovering-City-Sodom-Fascinating-Testaments/dp/1451684304/ref=tmm_hrd_swatch_0?_encoding=UTF8&qid=&sr=