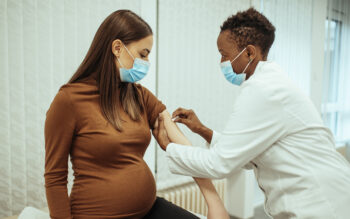 A total of 34 pregnant women have had spontaneous miscarriages or stillbirths after receiving a COVID-19 vaccine, according to data filed with the Vaccine Adverse Event Reporting System (VAERS).

“Reports made to VAERS do not necessarily mean that a vaccine caused the event or reaction,” a report in the Epoch Times noted. Correlation does not always mean causation.

But because long-term placenta studies were not carried out on women of childbearing age by the vaccine manufacturers, these reports should spark caution about the vaccine by pregnant women or women contemplating pregnancy in the near future.

There were 25 spontaneous miscarriages in the first trimester after receiving the Pfizer-BioNTech vaccine. The four cases of stillbirths occurred in the second or third trimester.

A 31-year-old doctor in Tennessee, five weeks pregnant, suffered a miscarriage 13 days after being vaccinated with a Pfizer vaccine. She had no known allergies or medical history.

An Indiana nurse, 33, in her third week of pregnancy had a miscarriage five days after receiving her second Pfizer vaccine, according to the Epoch Times report.

Also, a 32-year-old in Virginia who was eight weeks pregnant said she had a miscarriage five days after receiving the first dose of the Moderna vaccine on Jan. 14th. She suffered abdominal cramping and vaginal bleeding two days later and miscarried Jan. 19th.

In Michigan, a 35-year-old who was 28 weeks pregnant reported the baby’s movements diminished two days after her first Pfizer vaccine in December of last year. The woman delivered a stillborn baby weighing two pounds and seven ounces a week later.

“As an obstetrician-gynecologist, it is a concern,” Dr. Shelley Cole, MD, an OB-GYN, told The Epoch Times. “It concerns me that the CDC says that there are no studies, but it’s okay to get it and you don’t even need to discuss it with your doctor,” Cole said. “I mean this is the opposite of everything that the scientific models and methods, and standard of care has been for a century.”

The World Health Organization (WHO) stated on Jan. 8th that it does not recommend the Pfizer vaccine for pregnant women unless they are at high risk of exposure, such as health care practitioners, due to having insufficient studies, according to the Epoch Times.

In relation to the Moderna vaccine, the WHO stated, “We don’t have any specific reason to believe there will be specific risks that would outweigh the benefits of vaccination for pregnant women,” thus pregnant women in the health care environment or “who have co-morbidities which add to their risk of severe disease” may receive the vaccine.

“Pregnant or lactating women were excluded from both the Pfizer and Moderna COVID-19 vaccine trials, but Pfizer is currently conducting a phase 2/3 trial on 4,000 healthy, pregnant women who will be given the shots during the second and third trimester,” according to the Epoch Times.

Does string theory point to the nearness of heaven?