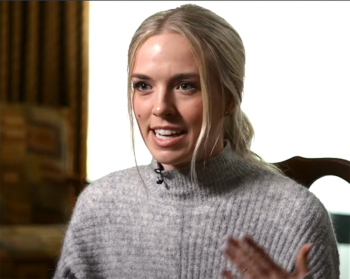 Figure skating brought moments of peace to Katherine Thacker. She needed a healthy outlet because her mind was obsessed with hateful thoughts directed toward the suspect who killed her father, a cop, while he was on duty. Forgiveness was out of the question.

“I started writing very angry letters to the man who killed my dad and expressed my hurt,” Katherine says on a 700 Club video. “But not only did I express my hurt, I also expressed what I wished could happen to him. And they were really really hateful.”

Her ever-present hatred started in 1998. That’s when three Kentucky police officers arrived at the front door of their home to break the bad news to the family.

“It was like being hit by a Mack truck,” she says. “Watching the relationships that my friends had with their dads, I definitely envied them.”

Ice skating was a moment of beauty in her life. “It was always an outlet for me,” she remembers. 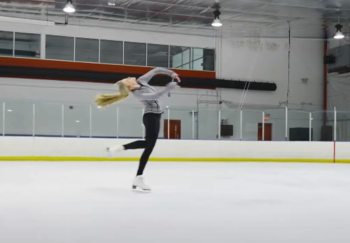 Broken in spirit, she turned away from God.

“Why did God let my dad die?” she asked. “If God’s good, why did He let the man who killed my dad do this?”

Her distancing from God continued until she became a junior in high school when she went to a week-long summer Christian camp. The motivational speaker displayed a genuine joy that Katherine realized she lacked.

Slowly but surely, she began unbuild, brick by brick, the wall she had erected to keep God out of her life.

“I assumed that if i built up this wall, God would be long gone. He’d be so far gone,” she recalls. “I realized that when I took it down and He was still right there. He didn’t leave or walk away.”

Katherine became a Christian, not because of her mom’s faith but her own.

She realized she must forgive her dad’s killer.

“My anger was consuming my thoughts, consuming my heart. It was blocking out parts of my heart that God could easily fill up,” she says. “So I ended up, through a lot of prayer, able to fully forgive the man who killed my dad. I hold no grudge against him. He can experience God’s forgiveness too, because he’s a sinful human just like me.”

Katherine stopped writing hateful letters that she never sent to the murderer. Instead, she started writing letters to the bereaved families of fallen policemen.

“I know for my family getting handwritten letters in the mail just to say, hey, we’re thinking of you, we are thankful for his sacrifice, those kinds of letters meant the world to me,” Katherine says.

She recruited others to get involved in the letter-writing campaign, to let people know God cares about their suffering, sees them and loves them.

The power of forgiveness brought healing to her heart and a blessing to many others.

Ben Lahood studies at the Lighthouse Christian Academy on the border of West Los Angeles.