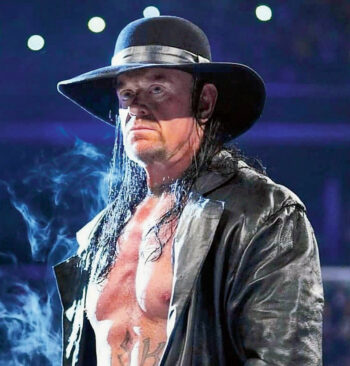 The Undertaker — WWE’s longest-running and most-heralded villain — has had a major change of heart thanks to his wife Michelle McCool who married him only after “she realized I wasn’t Satan,” he says.

Mark Calaway resisted accompanying his blonde wrestler wife to church because, after 17 surgeries, he didn’t look forward to bowing down at the altar and because he feared “the pastor’s going to see me and he is just going to throw fire and brimstone right me,” he says on a YouTube video.

“I went reluctantly, but once I got there I found myself going from being tense and pensive to kind of leaning in and like, ‘Wow, this is pretty cool.’ That started my journey.” 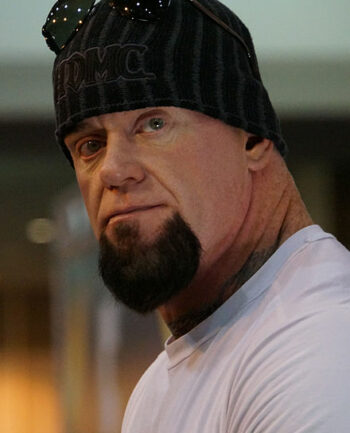 Mark grew up in a Catholic school with nuns enforcing the rules with cracks on the head in Houston, Texas. The 6’10” 309-lb behemoth was drawn to sports, basketball and football, and even played for the Rams in 1985-86 before donning a red mask in the ring in his original guise as Texas Red.

In 1989, he was re-christened “The Master of Pain,” with an invented criminal backstory as a recently-released killer from Atlanta, but by the end of the year he had a new name with a new schtick that stuck: he became The Undertaker, a persona that endured three decades and won 21 straight matches.

All the way, he lived “a life of excess” and cycled through two marriages before he met and married Michelle McCool in 2010. He retired from wrestling in June of 2020 after concussions and injuries made it increasingly difficult to perform on par.

When he saw Michelle McCool, he noticed her terrific work ethic and golden locks.

She wanted nothing to do with him.

“She was truly terrified of me,” Mark says. “She did not want anything to do with me.”

But he wore he down. He also proved to her that the bad guy persona in front of the camera had nothing in common with his heart.

They were married in 2010, but it wasn’t until recently that The Undertaker agreed to attend Lake Hills Church in Austin along with his committed Christian wife. “She was very persistent,” he admits.

Coming from a Catholic background, he was thinking he would have to kneel at several points during the service. With 17 surgeries and aches and pains throughout his body, he wasn’t looking forward to that.

When he finally went, The Undertaker was impressed with the pastor’s conversational sermon style and easy-going manner. The message about a relationship with Jesus made sense. Now, he thanks his wife for continuing to invite him.

“She is a very strong woman,” The Undertaker says. “She put me in the right place to get my life back on track again to what really matters. I’m forever indebted just for that. She brings the best out of me.”