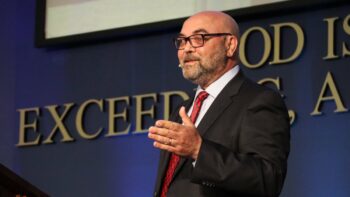 Haithman Besmar was a closet Muslim in London when he contracted a rare virus that hospital doctors told him would kill him overnight.

Raised by a devout family, Haithman yearned to please Allah. With uncommon intelligence, he memorized the entire Koran in high school. But he started asking questions. Since it is a sin to question Allah, his parents punished him severely “to save him from Hell,” he says.

At age 17, he departed for England to study civil engineering, finance and economics.

In the West, “I concealed my identity as a Muslim because it was so embarrassing for me, everything that was going on in the Muslim world,” he says. Aside from beheading of infidels in the Middle East, the Arabs who came to England displayed flagrant hedonism (while very religious at home, Muslims often give unrestrained abandon to their fleshly desires abroad.)

“I didn’t want to be associated as one of them,” he says.

In the office, he projected the image of being a native from England. But in private, he prayed five times a day, fasted during Ramadan and prayed his beads beyond what was expected — a dreary regimen of trying to appease Allah.

“There was nothing out of love and relationship with Allah, it was always out of fear,” he admits.

His integration into England was so complete that he married a born-again girl. As they fell in love, he confessed to her that he was, in fact, a Muslim. She lost her smile.

“Your religion freaks me out,” she said.

From time to time after marrying him, his wife would sweetly suggest something from the Bible, but Haitham always took refuge in the standard Muslim reply: the Bible has become corrupted through years of copying and translating. 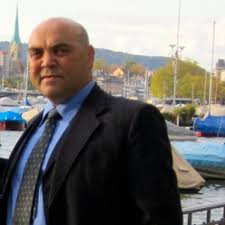 (Not until later did he see that the Koran’s pretensions to being unadulterated are not irreproachable either. Ninth century scholar Sahih al-Bukhari says the Koran comprises 116 chapters, but Sahih Muslim vol. 3 attests to only 111. The current Koran has 114 chapters, which means either two were added or three were removed from the original, he says.)

But the breakdown of his faith in Islam didn’t come from discrediting the Koran. It came from his hospital visit at age 50.

“I lost vision in my left eye from a virus in the optic nerve,” he remembers. Doctors warned him that if the infection invaded the brain, it could be fatal.

“The statistics are against you,” the doctor told him. “If you survive until the morning, we’re gonna have to induce a coma to slow the virus.”

“All my life I’ve done more than anybody can imagine. I’ve achieved more projects and more achievement in my life than 10 people put together,” he says. “I thought I’m done.”

When the doctors and staff had left the room, Haitham felt a hand touch his heart.

Haitham didn’t know who was talking to him. He opened his eyes and saw a bright light.

“I’m Yeshua Hamashiah of Nazareth that has born and died on the cross for you, that was raised from the dead and is now in heaven.”

“Where is Muhammad?” Haitham responded. 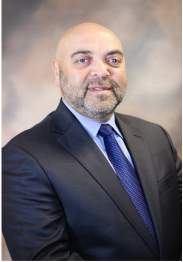 Still, Haitham wasn’t going to be dissuaded easily: “You’ve got the zip code wrong. I’ve been a Muslim for 50 years.”

I know. I’ve had my eyes on you all your life,” Jesus said.

Then for hours, Jesus dialogued with him and answered every question.

In the morning, Haitham was seated in the chair, to the chagrin of doctors who pretty much expected him to die during the night.

“Two days later, I left that hospital on my own feet,” he says.

He had accepted Jesus into his heart. Two weeks later, he told his wife.

“Wow, hallelujah,” she responded to the news. “I’ve been praying for this for seven years.”

As an outspoken convert to Christianity, Haitham has riled fanatic Islamists, who have made attempts to kill him 7-8 times, he says. But he doesn’t worry because God is in ultimate control.

“Worry is really a form of atheism,” he says. “You’re trying to plan your future without God in the picture. What can I do as a man? Well, the reality is, you can’t do anything as a man, but ‘I can do all things through Christ who strengthens me.’”