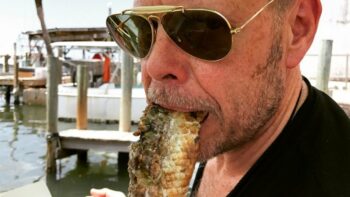 Alton Brown was bored to tears by the cooking shows he watched in the 1990s, so he set out to change that.

“I remember writing down one day: Julia Child/ Mr. Wizard/ Monty Python,” he explains on Mashed. “Everybody thought I was insane, but I knew I was doing what I wasn’t supposed to be doing.”

And that’s how the “greatest genius of the Food Network” remade cooking shows forever to the style of the mad scientist.

A born-again Christian who unabashedly says grace in fancy New York restaurants despite drawing stares, Alton Brown describes himself as a man of faith who’s simply executing a job: he’s a T.V. cook and internet personality.

“One of the things I pray for on a daily basis is that whatever God wants me to be doing, it’s reflected through my actions, how I deal with other people, the way I do my job.,” he told Eater in 2010. “And I hope I do it in a way that pleases Him.” 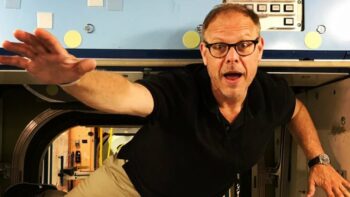 Born in Los Angeles in a family that soon moved to Georgia, Alton Brown suffered many disturbances in his childhood. First, his dad died on his last day of the sixth grade. It was ruled a suicide, but Alton suspects foul play.

His mom remarried four times, leaving a host of half-siblings scattered around the country, but he doesn’t have any significant relationship with them. He keeps his mom at “a 100-mile distance,” he says. “My mom didn’t respect me until I became famous.”

He married DeAnne Brown, an executive producer on Good Eats, and appeared happy until the couple divorced in 2015. When his Southern Baptist Church insisted he work things out, he resigned from membership of the church. Apparently, the potholes of his mom’s relationships punctured his own tires. 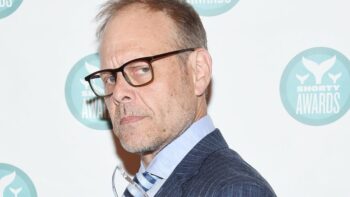 When he upended staid cooking shows, he injected nerdiness and madcap humor to liven things up. Arming himself with a New England Culinary Institute degree in 1997, he revamped the recipe of a TV chef.

A poor student of science in school, he delved into the chemistry of the cooking process, not just explaining how but why. He tiraded against exotic ingredients and single-use cooking utensils, often make-shifting his own with tools from the garage.

He cooked up Good Eats in 1998, which ran 14 seasons and won awards. He adopted the role of Dr. Yukio Hattori in 2004 for Iron Chef America Battle of the Masters, a knockoff of the Japanese cooking competition.

He hit the road on his beloved motorcycle to feature roadside eats on Feasting on Asphalt in 2006, then in 2013 premiered Cutthroat Kitchen in which battling cooks could remove either an ingredient or utensil from their opponents to win $25,000. 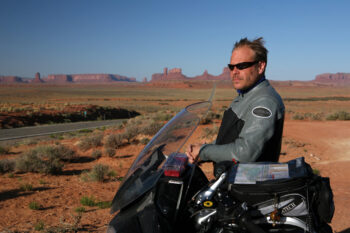 In the great debate as to whether pineapple is acceptable on pizza, he sides in favor. He loves fried chicken, enjoys strange flavors of ice cream (gin, Welch’s grape juice, gummy bears and prunes) but only grudgingly eats quinoa. The best donuts in the U.S.A., he says, are Gibson’s of Memphis, Tennessee.

While he’s been a man of faith and deep convictions, Alton has a distaste for dogmatism.

“I’m not a spooky snake handler because I live in Georgia and I’m Christian,” he says. “I believe in the Bible, I travel with the Bible, I read the Bible every day. I’m still a guy doing a job. I find, actually, that people ask me a lot about it. I don’t hit people over the head with the Bible.”