It is only the third month of the year, but if my guess is correct, most of you have already failed the test of your New Year’s resolutions.

Whether it was to exercise regularly, read your Bible every morning, or stop overeating, you may have found your will power lacking and wondered why you continue doing things you don’t want to do.

As the Apostle Paul said in Romans 7: “I do not understand what I do. For what I want to do I do not do, but what I hate I do…I have the desire to do what is good, but I cannot carry it out. For I do not do the good I want to do, but the evil I do not want to do—this I keep on doing.”

“This is an area where I have struggled,” Drew Dyck admitted in an interview with Impact 360 Institute. Dyck is the author of Your Future Self Will Thank You: Secrets to Self-Control from the Bible & Brain Science. 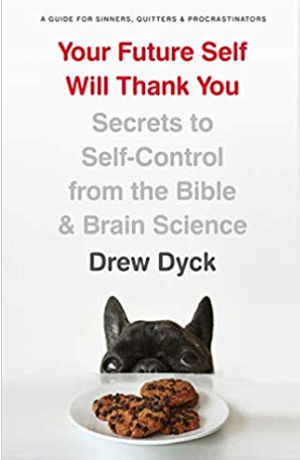 When Dyck consistently failed his own resolutions, he began to study what the Scripture teaches about self-control and what the latest brain science reveals, which led to his new book.

“There is a boundary between innocent behaviors that are not necessarily healthy and sin. If you eat one cookie that’s no big deal. But if you eat a whole box of cookies, which I’m ashamed to say I’ve done, that’s a problem.

“Self-control is a foundational or instrumental virtue,” he noted. “Without self-control you can’t grow in other areas of your life. Self-control is essential to resist lust, greed, gluttony and all these areas of temptation and sin.”

Of course, self-control is listed as one of the fruits of the Spirit in Galatians 5: “But the fruit of the Spirit is love, joy, peace, forbearance, kindness, goodness, faithfulness, gentleness and self-control. Against such things there is no law. Those who belong to Christ Jesus have crucified the flesh with its passions and desires. Since we live by the Spirit, let us keep in step with the Spirit.”

Because it is a fruit of the Spirit, it is available to every believer who walks by the Spirit. “This ability to say no to yourself in the short term and pursue loving and serving others and ultimately glorifying God is foundational to living the Christian life,” Dyck told Impact 360.

The author observed that our culture glorifies unrestrained self-expression, so self-control can seem like a boring, confining issue. “The arc of many movies is about a person who feels like people are trying to cramp their dreams and their need to express themselves. We don’t tell many stories of restraint and self-control.”

Contrary to what Hollywood might preach, self-control actually leads to a joy-filled life. “What leads you to the prison of habitual sin is lack of self-control and by exercising self-control your life can find freedom and flourish and find a holier, happier life,” he said.

In his research, Dyck discovered that will power – the emotional energy you need to accomplish difficult tasks — is a finite resource. “We only have so much of it. It gets depleted rather quickly.”

“When I come into a situation, I have a limited pool of this precious resource we call will power. That’s why I failed in my New Year’s resolutions. My will power got depleted really quickly and I failed.”

He talked to pastors that led weighty spiritual retreats and conferences, but in the let down after the conference, they succumbed to temptations they wanted to avoid.

“Knowing your own depravity leads to a self awareness that you need to control these things. I need this fruit of the spirit in my life because I’m in a battle against my flesh,” Dyck concluded.

Dyck decided he wanted to start each day with a devotional in God’s Word and prayer, but he had a bad habit of waking up and immediately grabbing his phone on the nightstand and looking at social media.

“I knew it was a bad habit I wanted to replace with a good habit. I put the phone on the other side of the room instead of my nightstand. I was wired to consume content when I woke up, but instead of grabbing my phone I grabbed my Bible. It was a simple trick I played on myself but it’s been tremendously helpful,” he noted.

Knowledge alone didn’t bring victory in his life. “I have a seminary degree and know a lot about God, but even if I have the knowledge I can default to bad habits. I’m talking about the automatic routines that are in your life, the things you do without thinking.”

“It is important to take a clear-eyed look at our habits and routines and ask which of these is leading me away from God and instilling destructive behaviors in my life. How can I supplant these with good habits that will lead me into the presence of God and lead to my flourishing?”

Dyck asked his wife to identify areas of his life where he needed to grow. She said she saw him reading theological books, but didn’t see him spending time alone with God on a regular basis.

“At the end of the day you never have enough will power. It always gets depleted. You could be Arnold Schwarzenegger, but your muscles will still get tired. That’s why habits are so important. The best use of will power is to develop new habits,” he said.

“The key is not creating new habits out of thin air, but taking destructive habits and replacing them with good ones.”

For example, he cited people who want to quit smoking. “If you are a smoker, when you step outside you have the urge to smoke. The routine is smoking the cigarette and the reward is the nicotine in your blood stream. Say instead of stepping outside and smoking, you go for a run. The reward is the endorphins you get from running, the runner’s high.”

Dyck advises against beginning multiple new habits simultaneously. “The key is to start one habit at a time. Don’t start big. If you want to start running, don’t go out the first day and run three miles really hard. You will deplete your will power. The key is to trick yourself into forming a new habit.

“It may seem silly, but you might want to walk around the block the first week. Then give yourself a reward. Condition your brain to think, every day, this is what I do. Then up the intensity as the days go by.”

Dyck noted there are differences of opinion about how long it takes for a habit to cement in place. The estimates range from 30 to 66 days.

“I’m surprised by how often I’ve started and failed after three weeks. And I think if I could have toughed it out a few more weeks, I might change my life. Once you have that one habit in place, then you can use your will power to initiate another habit.”

Sadly, technology has made the challenges facing believers even more pronounced. “Past generations of Christians didn’t have to deal with the inundations of technology,” he observed. “Most people look at screens 11 hours a day in America and we check our phones 150 times a day.

“On a couple levels that makes self control difficult. It pushes a lot of temptations right into our faces. Lust is at our fingertips with the Internet, as well as gambling and shopping. It facilitates all these bad habits.

Dyck believes it is essential to establish boundaries with technology, such as limiting phone usage after a certain hour of the day or not having it in the bedroom with him at night.

His family tries to make Sunday a “no screen day,” but admits it is difficult. “It is important to carve out those spaces in your life where technology is not wrapped around you and you can get some freedom.

In all of Dyck’s practical tips, first and foremost is to maintain a vertical connection with God. “Start every day reading the Bible. Start every day talking to God in prayer.

“Prayer is the only thing that is demonstrated in the literature to guard against will power depletion. So if you pray you will have more self-control in every area of your life.

“If I start the day with 5 or 10 minutes of prayer, I’m more productive that day, less likely to snap at my kids, I have far more self-control across the spectrum of my life.

That is the foundation, nurturing that relationship with God that will empower you to do all the other things.”

Dyck is an acquisitions editor at Moody Publishers and a contributing editor at CTPastors.com. He’s the former managing editor at Leadership Journal. His work has appeared in numerous publications including USA Today, Huffington Post, and CNN.com. He is the author of several books including Generation Ex-Christian: Why Young Adults Are Leaving the Faith…and How to Bring Them Back, Yawning at Tigers: You Can’t Tame God, So Stop Trying, and the new book, Your Future Self Will Thank You: Secrets to Self-Control from the Bible & Brain Science. You can find more from Drew and connect with him at drewdyck.com and follow him on Twitter here