While the discovery of DNA is usually credited to two physicists, James Watson and Francis Crick, there was a woman behind the scenes that paved the way for their breakthroughs by uncovering the complex structure of the molecule.

“They would not have won their 1962 Nobel Prize without the work of several scientists before them, including…Dominican Sister Miriam Michael Stimson,” according to a report by Aleteia.

Miriam, who passed away in 2002, also happened to be a professor of chemistry at Siena Heights University in Michigan.

While conducting cancer research, she determined the shape of DNA nucleobases, something that had eluded other researchers.

“For lack of knowledge of the DNA double helix, scientists were unable to understand the genetic roots of cancer, and subsequently they were unable to develop effective methods of treatment,” Jan Tsuji notes in his book, The Soul of DNA:

In the early 1950s, scientists were stumped about the shape of the DNA bases, with many scientists proposing models that were “inside out,” according to Tsuji. 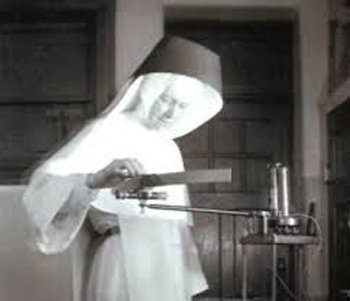 But Miriam used potassium bromide (KBr) to prepare the DNA bases for analysis by infrared spectroscopy and “affirmed the structure of the DNA bases and of the double helix itself.”

Sister Miriam saw her scientific discovery as a way of uncovering truths that would lead people closer to God.

Dr. Mark Eastman has also noted that DNA points an objective observer toward God. “DNA is an incredibly complex three-dimensional molecule made of building blocks called nucleotides,” he told a group of university students.

If biochemists used the elements of the ground and the presumed conditions that existed on the early earth — using today’s biochemical expertise — they could not create the building blocks of DNA, he said.

DNA carries an information storage system called the genetic code, expressible in mathematical terms, which codes for the production of all the structures and all the functions in living systems.

“Scientists will tell you this molecule evolved by chance through billions of years of chemical collisions, which caused this DNA molecule to arise. It evolved from the primordial goo through the zoo to you. It’s basically an accident.”

When a DNA molecule replicates itself, it produces two daughter molecules. Then two polymerases go along and feel the newly produced molecule. If the polymerase finds an incorrectly placed building block it pulls it out and inserts the correct one.

Could such a complex molecule have arisen by chance?

One prominent atheist philosopher, Antony Flew, admitted that DNA pointed to God’s existence. He abandoned his lifelong atheism and became a deist in 2004 in the face of the scientific evidence:

“What I think the DNA material has done is that it has shown, by the almost unbelievable complexity of the arrangements which are needed to produce (life), that intelligence must have been involved in getting these extraordinarily diverse elements to work together,” Flew stated.

Flew could not explain the fine-tuning of the universe and intricacy of the earliest molecules. “It’s the enormous complexity of the number of elements and the enormous subtlety of the ways they work together. The meeting of these two parts at the right time by chance is simply minute. It is all a matter of the enormous complexity by which the results were achieved, which looked to me like the work of intelligence.”

Flew stated that “the most impressive arguments for God’s existence are those that are supported by recent scientific discoveries” and that “the argument to Intelligent Design is enormously stronger than it was when I first met it.”

Miriam was the second woman to lecture at the Sorbonne in Paris, following Marie Curie. She received international recognition for her early work with the spectroscope, a tool used for analyzing chemicals, and wrote manuals for using the instrument. Miriam also worked on wound-healing hormones.

She believed that knowledge will lead us to God, “if we maintain a disposition of humility and love.”