An American missionary in Brazil is under investigation and may be charged by authorities with genocide for making illegal contact with a remote indigenous tribe, potentially exposing them to diseases.

Brazil’s National Indian Foundation (FUNAI) have asked authorities to look into an incident that took place in December involving missionary Steve Campbell and the Hi-Merimã tribe. FUNAI notified federal prosecutors and the police in early January about the alleged encounter.

Campbell and his wife are based in Rondonia, Brazil and work with the Jamamadi Indians in the Brazilian state of Amazonas. He has lived with the Jamamadis since 1963, when he arrived in the region as a child brought by his parents, who are affiliated with Wycliffe Global Alliance.

Steve’s “work is to help with medical, mechanical and countless other ministry opportunities with the Indians and missionary families,” according to the Greene Baptist Church in Maine, one of the Campbell’s partnering churches. His sending agency is the Baptist Bible Fellowship International.

While Campbell lived among the Jamamadi, he entered the more isolated Hi-Merimã tribe’s area by accident while teaching the Jamamadi how to use GPS devices, according to the Brazilian newspaper Folha de São Paulo.

In the 1970s, indigenous Indians in Brazil were placed under the protection of FUNAI through the passage of the Indian Statute. Since then, there have been political battles between those who favor integration of the groups into society and others who believe they should remain isolated and protected from modernity.

Powerful mining and agricultural interests that want the indigenous reservations open to development have also influenced the direction of government policies. Gold and diamond hunters paid FUNAI in recent years to conduct explorations in the Palimi-u River area until November 2018, when the army stepped in and arrested 900 people and confiscated 350 kilos of gold.

For most of the last 30 years, FUNAI has maintained a policy of non-contact with the isolated tribes after several of them lost up to two thirds of their population when they contracted diseases like measles. Some of the groups also faced adverse consequences when they were forced to relocate due to major highway construction projects.

Bruno Pereira, who coordinates FUNAI’s study of isolated groups in the region, takes a harsh view of Campbell’s (and other missionary) activities. “If it is established in the investigation that there was an interest in making contact, using his relationship with other Indians to approach the isolated, he could be charged for the crime of genocide by deliberately exposing the safety and life of the merimãs,” he noted in a statement to Brazil’s media.

“Their immunological memory is not prepared for a simple flu or conjunctivitis,” Pereira noted. “Another point is contacts conducted by people who do not respect the self-determination of these peoples and their ways of life. Historically, this has led to violent interference in their vital relationships with the environment, with family relationships, with what they believe. ”

However, since Brazil’s President Jair Bolsonaro assumed office January 1st the policies regarding indigenous tribes are changing, which has ignited a heated debate. President Bolsonaro is a conservative sometimes compared to President Trump. Raised Roman Catholic, he and his family have regularly attended a Baptist church in Rio de Janeiro.

Bolsonaro has said there will be changes in the current policy of not contacting isolated Indians. He infuriated protectionists by appointing an anthropologist and evangelical pastor, Damares Alves, to a newly created position: Minister of Women, Family, and Human rights – which will oversee the country’s 900,000 indigenous people.

President Bolsonaro has ordered a study to determine how best to integrate the indigenous groups into society and Alves has stated she supports that goal.

She will oversee FUNAI and her new position will be under the Agriculture Ministry, rather than the Justice Department.

Alves has an adopted indigenous daughter and is one of the founders of Voice For Life, a group combating the infanticide of disabled and unwanted children, which is still practiced in some indigenous communities. The group’s Facebook page also shows its members preaching in indigenous villages and contains a link to YWAM.

The appointment of an anthropologist who happens to be an evangelical pastor prompted outcry from feminist groups, indigenous activists and LGBT campaigners, who want the tribes left alone from outside influences – especially Christian ones. 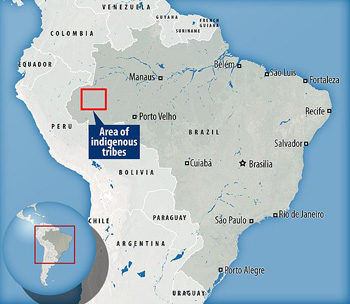 One anonymous FUNAI official said their staff have been left “bewildered” by the choice of Alves. “They chose the worst possible [person]. We are in a state of shock,” he told The Guardian.

A veteran missionary in the region believes Steve Campbell has been caught up in a larger political battle. “There is a war going on right now for control of the indigenous people,” notes Larry Buckman.

“The people operating under this new government are furious that Christians like Alves has been put in charge…and that FUNAI has been moved from under the Justice Department to under her Ministry of Women, Family, and Human rights.”

Buckman alleges the new government is uncovering corruption at FUNAI. “They (officials at FUNAI) are squirming like crazy to find any other headline in the news that would be a distraction so that people aren’t looking at them,” he charges.

“This is the kind of fake news we get from the FUNAI people who are anti-evangelical. They are trying to nail anybody they can with any kind of infraction.”

Contrary to media reports, many of the indigenous people want improved contact with the outside world, according to Buckman. “Every tribe we have contacted are begging for little airports to bring them education and health services,” he notes. “They already know that other tribes are living better than they are and want help. They do not want to be isolated.”

“The Gospel changes cultures, which in the political world is terrible. If they become educated they will be able to defend themselves. If their youth become doctors and nurses they will have a longer life and more children.”