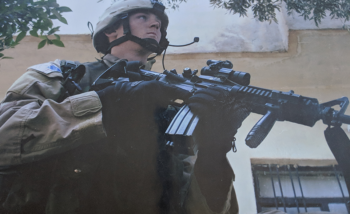 One of the hardest transitions for Wesley Pinnick from hunting terrorists in Iraq to civilian life in America was the loss of brotherhood he felt in the military.

“A lot of guys who go in the military have blood brothers, but they go in the military and they say, ‘You’re closer to me than a blood brother’ because you literally spend a year or years all of your time together,” Wesley says. “Those guys I went to combat with know everything about my life. You have nothing else to do but play dominoes and talk. It’s emotional bond that you have with these guys.”

Of course there was post traumatic stress disorder. Of course the shift from adrenaline jolts while dodging bullets to the drudgery of a day job was difficult. But it was the bond that was formed with those brothers — and then was broken when he returned to America — that hit him hard.

“When I got home, I realized, I’m never going to be as close with anybody ever again as I have with these guys — even to the point of when I get married, will I ever be this close to my wife?” he wondered.

Wesley is lucky. He found a church and fellowship with Christian brothers that, if not as close, was a decent approximation. He ran a discipleship house with new converts to help them break free from drugs, alcohol and other habitual sins as they learned to follow Jesus at the Door Church in Tucson.

As the U.S. war on terror extends itself with no end in sight, the U.S. is seeing increasing numbers of soldiers who struggle with traumas. Wesley’s story points the way to one great help for these soldiers — Jesus and the bond of brotherhood that can form in the church.

“The question is how do I live a life when I’ve already done potentially the greatest things I will ever do with my life, and I’m 21?” Wesley says. “What I really needed was people I could depend on and who could depend on me. I needed that camaraderie.”

Today, Wesley is a pastor in Long Beach, CA. But how he left his childhood church and enlisted to raise hell in Iraq is the story of a prodigal son.

Wesley knew nothing but church as a kid and teen. His dad was a minister in the Door Church, and he never had a friend outside the church. He felt burned out on the “unreasonable expectations” imposed on church kids.

“The reason I joined the military was to get away from church,” he says. “I backslid because I didn’t see any reason for me to stay saved. I didn’t want to mark out the next 30, 40 years in the church.”

So he bolted. Instead of fighting the devil, he fought terrorists. He and his buddies blasted open doors with C-4 plastic explosive and hauled off suspected Al Qaeda and Taliban terrorists in 2004 at the start of the war in Mosul.

“It was a very traumatic experience in a lot of ways,” says Wesley, who fast-tracked to sergeant in two years. “I still don’t know how to talk about that.”

He was in the middle of the desert without God. Between the deaths of two buddies, he suddenly decided to re-start his relationship with Jesus by praying at night in bed.

Surprisingly, it wasn’t the constant brushes with death that drove him to Jesus, he says. In fact, the exact opposite happens: soldiers who have escaped unscathed from conflict wrongly believe they are invulnerable.

“You think you have a power, that you are wielding something that has been tested,” he says. “You feel you’ve overcome it.”

One day over a cigarette, Wesley just had a simple thought: God had left him. His next thought was that he didn’t care.

Then it struck him as alarming that he didn’t care.

“That was the first pivoting moment when I started to go back and re-engage my relationship with Jesus,” he says.

Two years after enlisting, Wesley was released from the Army and returned to his hometown. He was diagnosed with mild to strong PTSD, for which doctors prescribed psych drugs.

“I did not go on medicine. I went to church,” he says. “It took me five years to feel like I had a hold of myself. But I still have flashbacks today. They’re not as a strong as they used to be. It’s a wound but more like a scar.”

The church and Veterans Administration courses helped him

Now 35, Wesley is married with three children. He has been pastoring the start-up church in Long Beach for two years. It’s been 15 years since his release from the Army, and he still struggles — though to a lesser degree — with putting the past fully behind him.

“I take the scripture of being a good soldier and apply it to what I’m doing today for the gospel,” he says. “I think I’m always going to be transitioning. I’m a continued work in progress.”