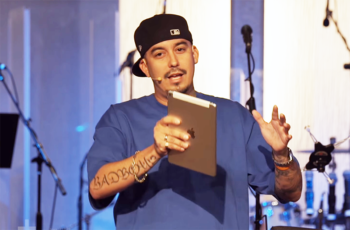 Chris Bassett’s first interaction with God started when he attended a Christian karate class at age 8 or 9 years old at the Harbor Church in Lomita, California.

The class started with 20 minutes of Bible study and a call for salvation before the free karate lessons. One day, Chris felt like the pastor was talking directly to him, so he raised his hand at the altar call to receive Jesus.

“I felt the Spirit of God come down and descend on me like electricity through my body,” he recalls in a Youtube video. “I remember walking away from that experience feeling cleansed, brand new. It was so tangible to me.”

He wished this was the end of his testimony and that his path to Christ was that simple, but it was not.

He got involved in a gang lifestyle, which was easy since a lot of friends and family were in the gang.

“It looked glamorous. The glamour was a lure,” Chris says. “These men I looked up to had a way of carrying themselves that was attractive. They had the nicest cars, the prettiest women, money, power, respect. If you grew up in the hood, you knew who was running the block. It was something exclusive. You had to prove yourself through violence. Once you were in, you were accepted, loved in a way. I knew my boys had my back. If I had any trouble, with just one phone call, I knew I had a carload of goons kicking down the door for me. 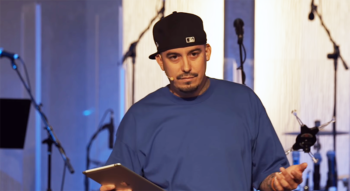 But as he participated in the gangster life, he became aware of the downsides.

“The reality of (gangs) is a nightmare. At the heart of gang-banging, I truly believe, (there) is a murderous demonic force, full of death and destruction,” Chris says. “I’ve been to many funerals. I’ve lost a lot of friends and family to that lifestyle, shot dead in the streets. I shot my first man when I was 15. I can still hear my ears ringing from the gunshot. I can still hear him screaming and praying to God. I can still see the blood pouring out of his head like a waterfall, so much blood that I could taste it in the air.”

“That was just the beginning of my crimes in my gang-banging career,” he says grimly.

Chris not only shot but got shot at on numerous occasions. He’s been stabbed. He’s spent time in jail. He lost friends. Worse, he realized he was losing yourself.

There wasn’t one single moment that brought him to God, but progressively, Chris feels, God was “opening his eyes.”

One of those “opening eyes” moments was when he chased down an enemy and threw his Corona beer bottle at his head. The enemy responded by aiming the barrel of a gun straight at him in a red light on Western Avenue and Pacific Coast Highway. 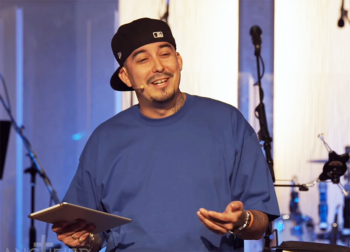 “I almost got my head blown off,” he says. “I could say now that by God’s grace I survived that because if you could’ve seen the car, everywhere where my head was, the car was blown out. It was a big gun, one with thunder. It was probably five or six seconds. But time slows down through those things. I remember ducking and telling my friend to go, and I remember seeing glass flying.

“I had just kissed my son goodbye because he was going to his mother’s house. I remember coming out of that situation.”

But that incident alone was not enough to wake him up.

He began reflecting soberly about the possibility of dying and leaving his kids fatherless. In the streets he was a monster, but with his kids Chris played the part of a good father. His family was sacred. He pondered the discrepancy between the way he wanted to raise his kids and the way he was living in the streets.

What scared him most was not the scrapes with death, but the frightening numbness towards the horrors of his own evil heart. Now, he thinks he was becoming like Pharaoh, whose heart got progressively harder until he was crushed under the Red Sea

But he still didn’t return to the Savior of his childhood because he liked smoking weed and sleeping around with girls. It took him a year.

At a funeral, he had another powerful reflection. Everybody was saying nice things about his fellow gang member.

He was at a low point, facing divorce and losing a job.

The tipping point was when he opened Facebook and saw the post of a friend. It was a verse in Philippians: “Do not be anxious about anything, but in every situation, by prayer and petition, with thanksgiving, present your requests to God. And the peace of God, which transcends all understanding, will guard your hearts and your minds in Christ Jesus.”

The promise of peace attracted him, because he never had peace.

Harbor Church, the place where he took karate classes in his youth, was where he wound up. It was just down the street.

“I’m a dead man that Christ brought back to life.”

“I often asked myself if I was truly saved when accepted God at 9 or 10. I believe I was. Even on my darkest day, I believe God was still with me.”