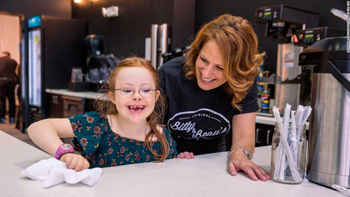 They starred on Broadway, but their most celebrated roles came later as parents of two Down Syndrome kids, for whom they opened a coffee house.

The Wrights have become a national sensation, winning CNN’s Heroes of the Year, after being featured on national news. But their trajectory towards canonization was marked by emotional turmoil and disgrace. 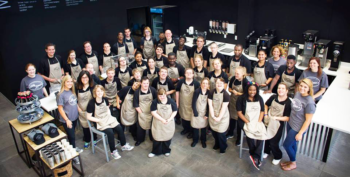 “There was just an enormous amount of grief — it was like I was grieving the son I thought I was going to have,” Amy told Baptist News about the turmoil of disappointment before Beau’s birth. “When we learned about Beau’s diagnosis I felt so sad and overwhelmed.

“We are so embarrassed about that now,” she added to the Wilmington Star News. “But if we had had more exposure to people with Down Syndrome back then maybe we would have felt differently.”

She came to love her Down Syndrome boy.

It wasn’t long before Amy saw that her special needs son was not a burden but a blessing. She saw his effervescent joy, and she discovered his giftings. People with Down’s Syndrome are in no way inferior or less worthy of life than others — and God has given them special qualities that others don’t have.

“When you become a parent of a child with special needs, you are instantly thrust into becoming an advocate,” Amy said in CNN. “Trying to make people see the beauty in their lives that we see. My children are not broken.” 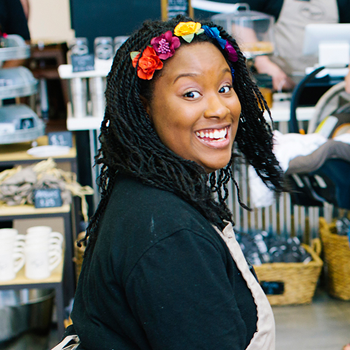 Eventually, Amy and Ben decided they would do something to help other people with IDD, 70 percent of which are unemployed. In February of 2016, they opened a coffee shop, which they named after their kids, and hired a crew of 40 with IDD ranging from autism to cerebral palsy.

To see Bitty & Beau’s employees making java or ringing up customers, to see them singing and laughing with clients in their new 5,000-square-foot facility, brings a sensation of faith restored in humanity. It packs a joy-filled jolt that’s better than caffeine.

“My job gives me confidence and helps me grow as a person. My job brings me joy and happiness,” noted Jesse on the website. 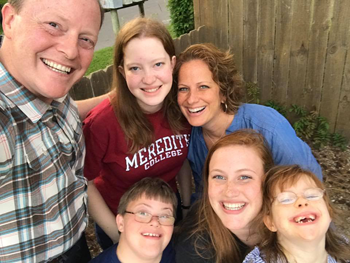 “I like working at Bitty & Beau’s Coffee because I have new friends. I also make delicious frappes & cappuccinos,” Stephanie said.

The backstory on these Christian heroes starts in the entertainment industry.

Amy, raised in Pennsylvania and North Carolina, loved dance and singing lessons while being raised in a Methodist church. She attended the University of Cincinnati’s College-Conservatory of Music, where she met Ben, who worked his way to celebrity on a different path. 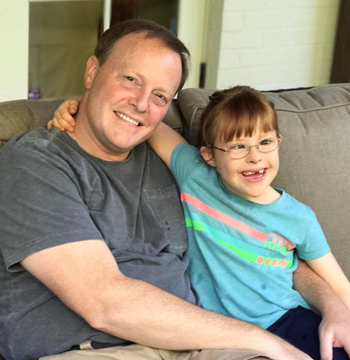 His mom, enthralled by theater, dragged him to auditions on the local scene. Though originally it was mom who sought roles, it was Ben who started landing lucrative roles because of innate acting talent.

“I just sort of went along with it,” Ben said. But “I never had a burning desire. It was just something I grew up doing.”

The couple married in 1993 and moved to New York to pursue Amy’s dream of performing on Broadway.

Ben landed the role of Jack in Into the Woods by Stephen Sondheim and as Wayne Frake in 1996 in Rodgers and Hammerstein’s State Fair. Amy performed as a member of the production’s ensemble.

Ben continued acting, landing roles in the films Born on the Fourth of July and Renaissance Man. He starred opposite Judd Nelson in NBC’s Hiroshima: Out of the Ashes. For her part, Amy won roles in television commercials for cars, restaurants and hair-care products. At the same time, she ran a performing arts studio for children.

Then, Beau — now 13 — was born, sending their lives in a completely different direction.

Ben opened an investment firm, Dye Creek Capital, to raise funds for the cause and hire employees with developmental disabilities.

Meanwhile, Amy opened the coffee house and founded Able to Work USA, a nonprofit dedicated to raising awareness about the fitness of IDD employees. 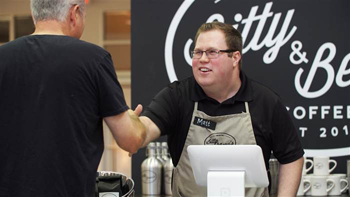 “I feel that was the moment I was drawn closer to God,” Amy said.

“Given the right support, these individuals are fantastic employees — very loyal, very dependable and certainly very capable,” Amy said. “People with disabilities have been in the shadows for too long.”

These Christian heroes who minister to people with IDD have been featured in People magazine, the Today show, Rachel Ray

“I want to see a Bitty & Beau’s on every corner from Coast to Coast,” she said. “I hope they give Starbucks a run for their money!”

When Amy was named CNN’s hero of the year, she told her IDD children — watching on TV at home: “I wouldn’t change you for the world, but I will change the world for you.”