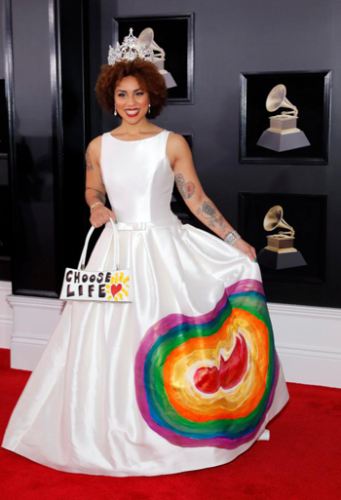 Joy Villa always turns heads at the Grammy’s, but in January observers wondered if she went too far, too political, when she sported a white gala dress hand-painted with an 8-month-old fetus surrounded by a rainbow womb with the words on her matching purse: “Choose Life.”

Villa — who among entertainers was a rare supporter of Trump with a “Make America Great Again” evening gown in the 2017 Grammys — shared that her motive to brazenly flout normative Hollywood politics was that she herself, pregnant at 20, alone and frightened, made the “most difficult and important decision of my life,” she wrote for Fox News. “I decided to carry my baby to term and then give her up for adoption to a loving family. I put her life over mine. It wasn’t easy. Every day was a struggle.”

Today Villa has an estimated net worth of $3 million. Her song (non-Christian) “I make the static” spiked charts at #1 after her MAGA/Trump publicity stunt. She lives comfortably in New York with her husband, Danish photographer Thorsten Overgaard.

But her life wasn’t always gold and glitter.

“I was penniless, far from home and trapped in an abusive, toxic relationship with a man who had become a shadow of what he once was,” Villa wrote. “At 19 I fell in love with an older man who was very kind hearted with a good heart, but once he began using drugs our relationship quickly became a nightmare. The same arms that once held and protected me were weaponized; night after night, I’d hide in a corner, terrified of being beaten.”

She worked in entertainment but hadn’t achieved success, so she found herself at the mercy of a merciless man. When the contraception failed, she found herself in a clinic with a nurse pressuring her to avail herself of the easy escape.

“She told me, ‘We can do it now, it’ll make it all go away. I’ve had several abortions, in fact all three of my daughters have had several. You are too young to have kids. This is the best choice for you,'” Villa shared. “I had never considered abortion, I wanted to stay and make things right with the father, to have a real family. (The nurse) had already made my choice for me.” 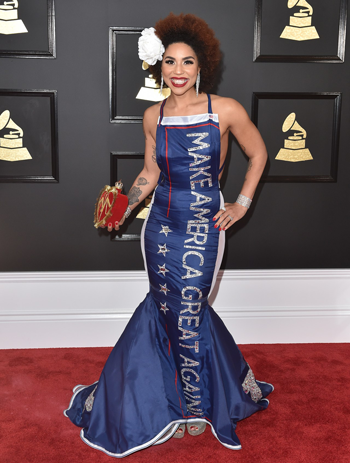 The pressure from a “medical professional” warped her mind.

“I couldn’t stop crying: I had a beautiful baby growing inside of me,” Villa recalled. “For many women, becoming pregnant is a dream come true, but I was overcome with guilt, agony and shame.”

But Villa gathered courage to defy the urgings of so many people. She decided to give her child up for adoption.

“When you’re young and vulnerable, sometimes your mind plays tricks on you: ‘I don’t deserve happiness!’ ‘I don’t deserve love!’ ‘This is the best I can do!’ It pains me to remember how utterly devoid of value I felt at the time, but I truly believed that I deserved to be abandoned, forgotten and punished. I thought, ‘This must be my fault, so I have to stay and try to fix this.'”

Ultimately, Villa escaped the abusive marriage and didn’t abort. She found her way out without turning to termination.

Villa is not a Christian; she currently practices Scientology, according to Wikipedia. Even before donning political dresses, she was an attention-getter at the Grammys. In 2015, she wore orange construction mess, drawing a remark from the Washington Post about her “unusual” apparel. The next year she repeated with a dress made of fabric spikes that the Huffington Post graded as “one of the most outrageous.”

She has been accused of using the pro-Trump red, white and blue slinky number only as a ploy to boost her sales. To be certain, in the two days following her counter-current MAGA dress, her album sales sky-rocketed 15,000.

At least her politics are consistent. She’s even considering a run for U.S. Congress.

Her father, Joseph Villa, was a Christian pastor of Italian and Argentinian descent. Her mother, Mildred Angela Pierce Villa was African American with Choctaw Native American blood mixed in.

It appears she came under the influence of her father in her childhood because she tweeted Oct. 27, 2017: “When I was 3 years old I accepted Jesus as my Lord and Savior.”

Pray she will escape the deception of Scientology and embrace the Savior she knew as a child.