Four Britons serving as medical missionaries in southern Nigeria have been kidnapped by a militant group.

A former general practitioner from Cambridge, David Donovan, and his wife Shirley, were taken from their home in a rural area of Delta State on October 13th, according to The Times.

The two other victims were identified by police only by their first names: “Alana” and “Tyan”.

The doctor and his wife, both 57, work with New Foundations, a Christian medical mission that provides help to remote villages in the Niger Delta.

They have served as missionaries for 14 years. In 2003 they launched a boat clinic serving isolated villages. Four years later they set up a health clinic in one of those villages where child mortality was high, according to The Times.

In the last two years they conducted 500 cataract operations, treated 16,000 patients, vaccinated 4,000 children and set up rain-harvesting systems in eight villages. They have also been providing Bible training. 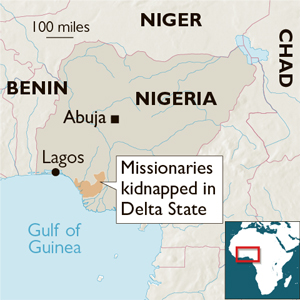 Sandra Linnane, 54, visited the couple in Nigeria last year after students at the school where she works raised money for New Foundations.

“It was fantastic to see the work that they are doing and working with the leaders of the community,” she said. “They are a very caring couple. They are passionate about the work they are doing.”

On October 17th, police brought in 14 people suspected of involvement in the militant group and said that a joint task force would make a rescue attempt.

The group thought to be responsible is known for making ransom demands.

Zanna Ibrahim, the police commissioner for the state, said that recent kidnappings may be linked to the government’s stepped-up efforts to counter militancy. Delta has a history of separatist movements linked to its oil resources and impoverished conditions.

A police spokesman said: “The abductors have not made any contact but we are doing our investigations to know the motive and have them rescued without jeopardizing their lives.”

Kidnapping continues to be a menace in southern Nigeria, especially targeting prominent individuals and affluent families. Victims are usually released a few days after a ransom is paid.

The British Foreign Office advises people to avoid all non-essential travel to parts of southern Nigeria because of the high threat of kidnapping.

The abducted couple’s sons also work with the medical mission. One, who is 30, is a medical student at Durham University and has a degree in Chinese studies from the University of Sheffield. The other, 27, graduated from Manchester University with a degree in Arabic studies, according to The Times.

Chief Theo Fakama, from the local Enukorowa community, told the Agence France-Presse news agency that villagers were saddened by the kidnapping because the victims had “brought succor to residents of the community for the past three years”.