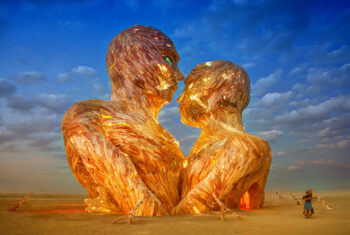 It’s not the tie-donning, Bible-toting crowd that heads to the Nevada Desert to evangelize at Burning Man, the art hipster festival that draws more than 50,000 for a blistering week on the dry alkaline lakebed.

No, it even draws Christian iconoclasts who flout church conformity. Styled on the born-again hippies of the Jesus Movement, these guys see beyond the largest pagan cult gathering in America. They see misguided souls thirsting for truth.

Burning Man, for the uninitiated, is religion for the religion-less. From Aug. 27 to Sept 4, “Burners” camp in Black Desert and revel in alcohol, drugs, biking, electronic dance music and unbridled hedonism. The bacchanal culminates when a gigantic wooden centerpiece – or temple – is burned in effigy on Saturday night. 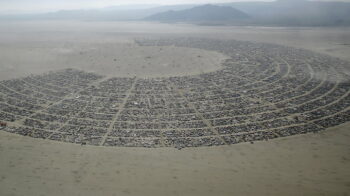 The celebration has elements of religion: ritual, a code of conduct and a sense of community. But there is no clear focus on a deity.

This is where Phil Wyman comes in. A Christian pastor who reaches out with love and acceptance to the witches at the Halloween fest in his native Salem, Massachusetts, Wyman is long-haired preacher who’s been described as a cross between Gandalf and Indiana Jones. 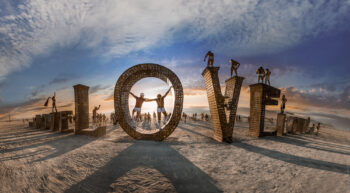 Wyman, like other Burners, erects an interactive art display with a message that seeks to activate a quest for true spirituality. In 2011, his Pillars of the Saints honored Simeon Stylite, the ascetic pole-sitter who sought to connect with the Spirit through a radical disconnect with this world.

Wyman’s messages are suggestive, not authoritative, which is why they resonate with the lost souls at Burning Man but they also raise eyebrows among straight-laced Christians who want a more orthodox message. Wyman employs the Socratic method and gets people thinking by asking questions.

“I wondered why Christianity had not typically embedded itself into these festivals, why we weren’t among the leaders of new cultural developments and wildly creative thought,” Wyman wrote in Christianity Today. “Certainly God is wildly creative—enough to find his way into human hearts in other cultures around the world.”

One church from Ohio became famous for passing out waters, which is pretty handy in the scorching heat and dust of the desert. It was a way of showing the love of Christ in a practical way.

There have been Christians who dress like Jesus and carry the cross. 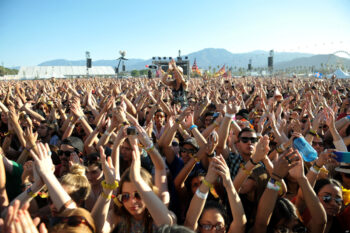 Burning Man is a ripe harvest field for out-of-the-box evangelism.

First held in 1986 on a beach of San Francisco, the gathering has grown to become its own temporary city, Black Rock City. Its 10 commandments – or “main principles – are radical inclusion, self-reliance, self expression, civic responsibility, community cooperation, gifting , decommodification, participation, immediacy and leaving no trace.

Spewing an anti-capitalist agenda, Burning Man seems something of an experiment in communism or a reimagined Woodstock cultural phenomenon – except for the fact that billionaire technologists from Silicon Valley eschew the camping for luxury installations with exclusive parties. 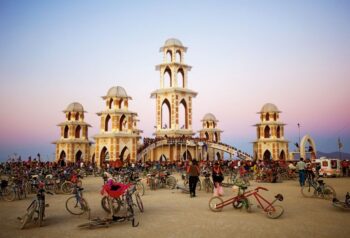 The newly rich tech world entrepreneurs network and recruit, enjoying the values espoused by Burning Man, and its futuristic vision of a new society where man’s ingenuity displaces a need for God.

A lot of veteran burners despise the 1%, but festival co-founder Robert Scott welcomed them in The Guardian. “There’s a lot of ways to find an epiphany. Being in the desert under hard conditions is one way to bring yourself into a receptive state, I suppose, but all these (luxuries) are putting you in the same place gently.”

Epiphany? Receptive state? Sounds like Christians should be on hand to help those who may unexpectedly find an encounter with the one, true, living God.